John Kasich: 'If I Don't Do Well Here, They'll Have to Hear Me in Some Book'

Posted Jan 28, 2016 5:00 AM
Walter Shapiro
Think impeachment has been a self-defeating crusade for Democrats? Think again Why Mitch McConnell should be the Person of the Decade, and not in a good way The impeachment holiday gift catalog

MANCHESTER, N.H. — More than any candidate in the Republican race, John Kasich is running as the anti-Donald Trump. It is not that the two-term Ohio governor goes out of his way to attack the bilious billionaire. But 33 years after Kasich was first elected to the House, his political persona, his view of government and his attitude toward compromise are all a rebuke to the ego-mad arrogance of Trump and the scorched-earth fanaticism of Ted Cruz. 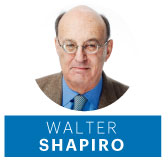 And New Hampshire — where 47 percent of the voters in the 2012 GOP primary identified themselves as "moderate or liberal" — is poised to offer Kasich a major boost when it holds the opening-gun primary on Feb. 9.

"What I learned here," Kasich said in a long interview with Roll Call, "is that if you walk into a room and you want to preach fear and negativity, you can lead people into fear and negativity. But if you go into that same room and you preach, 'Yeah, we have problems — and they're serious. But they can be fixed. Let's realize how great America is if we come together.' That's positive."

It is not just Trump and Cruz who portray Barack Obama's America in near-apocalyptic terms. Giving his stump speech at a recent candidates' forum in Nashua, Marco Rubio wailed, "Never in our history has Washington been more out of touch than it is now. ... This is not a time for waiting. This is not a time for patience. After seven years of Barack Obama, it is a time of urgency."

Amnesia has become a contagious disease among Republicans seeking the White House.

Trump remembers nothing that did not involve him personally. Both Cruz and Rubio radiate the short-time horizon of young men in a hurry impatiently serving their first terms in the Senate. Jeb Bush has a difficult time recalling that his brother led America into the most disastrous war since Vietnam. And Chris Christie pretends to forget that he still could be named as an "unindicted co-conspirator" over the cockamamie George Washington Bridge shutdown.

Unlike his GOP rivals, Kasich is animated by his memories of the 20th century in Washington, when he chaired the House Budget Committee and compromise was not an epithet.

Again and again in town meetings and during the 45-minute interview, which I conducted along with Wall Street Journal columnist Peggy Noonan, Kasich kept returning to the pretty good old days of the 1990s. Part of it was to highlight a signature accomplishment — working with Bill Clinton to produce a balanced budget. At town meetings, a portable debt clock showing America owes more than $19 trillion flanks the frugal Kasich.

But it's more than budgets with Kasich. It's also an old-fashioned style of politics that he imagines bringing back to the White House. "I'd have to have Democrats come in and work with me," he said during the interview, repeating the words "have to" for emphasis. "Because you can't get this done otherwise. There's a lot of poison out there. You've got to start encouraging people to be grownups."

The Grown-Up Vote has not gotten the attention lavished on the Angry White Male Voter. But grown-up-ism remains potent on newspaper editorial boards. Which helps explain why Kasich has been endorsed by the Boston Globe, the Concord Monitor and six other New Hampshire papers. These endorsements are not quixotic gestures. Kasich has been polling in the double digits in New Hampshire and is ranked as the top mainstream Republican in the survey averages of Real Clear Politics.

But such numbers are fragile, especially since Kasich has all but abandoned next Monday's Iowa caucuses. Kasich could end up like another widely praised presidential candidate, Democrat Bruce Babbitt, who remarked after finishing sixth in the 1988 New Hampshire primary that anyone who believed in media conspiracy should compare his clips to his vote totals.

As we talked in an unadorned conference room off the lobby of Kasich's Manchester hotel, the candidate kept tempering his primary day hopes with a dash of political fatalism. He began to agree with a question suggesting that he needed to finish second in the New Hampshire primary or else when Doug Preisse, a top adviser from Ohio, adroitly cut him off.

"The problem is that I'm unknown," Kasich said, referring to the anonymity of being outside the East Coast Media Belt.  "I'm not a celebrity candidate. That's why this state matters so much. At some point, people might hear me if I do well here. If I don't do well here, they'll probably have to hear me in some book or something if anyone will read it."

But there are hints that things might be breaking for Kasich in a state of late-deciding voters. At a Bernard Sanders rally in Bedford, retired teachers Diane and Frank Zito laughed about how they were displaying dueling Hillary and Bernie lawn signs. But then Frank, an independent who can vote in either primary, confessed, "I could still go for Kasich."

The two Kasich town meetings I attended over the weekend, which each attracted about 200 voters, had an easy back-and-forth quality without stentorian oratory or angry exchanges. In Londonderry on the afternoon of Jan. 23, I chatted with four women (who laughingly called themselves the Rolling Stones) from a nearby retirement community who were anybody-but-Trump candidate shopping. "Some of the candidates just give speeches," said a Rolling Stone, whom I will call Keith Richards because she didn't want her name published. "But Kasich talked to us like we were there, like it was a conversation."

That comment by "Keith Richards" was made-to-order for the candidate. "Did you notice how people were laughing last night?" Kasich asked in the interview referring to the Londonderry event. "They were happy. It's so much fun. ... We joke around at these things, but it's deadly serious."

In truth, Kasich will never be mistaken for a standup comic. Even an understated droll one such as David Letterman or Jim Gaffigan. Kasich laughs easily and during an interview he can bounce around a room for emphasis. But there is also an intensity when he talks about topics that animate him like — surprise — the downtrodden.

"In politics, it's very easy to run over the disenfranchised," the Ohio governor said. "It's a piece of cake. Cut their budgets. The developmentally disabled. Who cares about the drug addicted? The mentally ill? That's not a lobby that we have to pay much attention to." That's wrong, Kasich said, "They count, they matter."

He abides by what might be called (if it didn't have an unfortunate Bush pedigree) "compassionate conservatism." He is now being attacked in New Hampshire TV ads for being one of the first Republican governors to expand Medicaid to take advantage of Obamacare subsidies.

National voters probably won't see the softer sides of Kasich in tonight's Trump-less Fox News debate. Kasich recognizes that so far the multi-candidate debates have made him seem either too strident or too invisible. "Harry Truman couldn't be elected president using this format," he complained. "You get six minutes and then you have to fight for your time because the moderators don't control [things]. It's absurd."

What isn't absurd — in an ugly political year that has highlighted the nativist and anti-Muslim undertones of the Republican Party — is Kasich's quiet boast. As he put it, "I'll tell you one thing, regardless of what happens here, I'm holding my head high."

Save for later
Topics: opinion poli