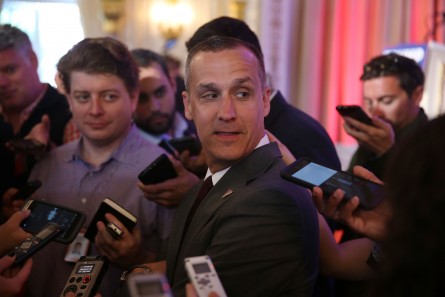 Who is Corey Lewandowski, the campaign manager accused of manhandling a female reporter trying to interview his boss, Donald Trump?

A former lobbyist. A former aspiring politician. A former employee of the Koch Brothers-backed Americans for Prosperity. In short, a seasoned campaign operative, working for a candidate with a professed disdain for such political professionals.

The world is quickly getting to know Lewandowski under the glare of an ugly episode Tuesday, when Breitbart News reporter Michelle Fields approached Trump at a post-election event in Florida to ask a question. Fields was grabbed from behind, an incident she described in a post on Breitbart on Thursday:

“I wasn’t called upon to ask a question during the televised press conference, but afterwards Trump wandered around, stopping at every reporter to take their questions. When he approached me, I asked him about his view on an aspect of affirmative action.

Trump acknowledged the question, but before he could answer I was jolted backwards. Someone had grabbed me tightly by the arm and yanked me down. I almost fell to the ground, but was able to maintain my balance. Nonetheless, I was shaken,” she wrote.

According to Washington Post reporter Ben Terris, who witnessed the incident first-hand, the person who grabbed Fields was Lewandowski.

“As security parted the masses to give him passage out of the chandelier-lit ballroom, Michelle Fields, a young reporter for Trump-friendly Breitbart News, pressed forward to ask the Republican front-runner a question. I watched as a man with short-cropped hair and a suit grabbed her arm and yanked her out of the way. He was Corey Lewandowski, Trump’s 41-year-old campaign manager.

A request for comment to Lewandowski with the Trump campaign was not returned. After Thursday night’s debate, Trump told CNN that be believes Fields is making up the incident.

“Everybody said nothing happened,” Trump said. “Perhaps she made the story up. I think that’s what happened.”

Breitbart News has since called for Lewandowski to apologize, and one of its editors, Ben Shapiro, has called on Trump to fire Lewandowski. The Trump campaign has responded by calling into question Fields’ reporting and ethics. On Thursday, Lewandowski tweeted “We’re Calling Bullshit on Michelle Fields” along with a link to a GotNews story accusing Fields of being an attention seeker with a questionable work ethic.

Save for later
Topics: