Plan calls for eliminating Legal Services Corporation, National Endowment for the Arts, and others

President Donald Trump on Thursday unveiled the first portion of his fiscal 2018 budget request, a discretionary spending plan that includes new funds for a major military buildup and severe cuts to federal agencies certain to be strongly resisted by lawmakers on both sides.

Among the hardest hit agencies under Trump’s “skinny” budget proposal are the State Department and the EPA, which would see a 28 percent and 31 percent reduction from enacted levels, respectively.

Spending is also slashed at the departments of Agriculture, Commerce, Education, Health and Human Services, Housing and Urban Development, and Labor, among others.

The plan, named “America First: A Budget Blueprint to Make America Great Again,” calls for eliminating numerous programs and agencies like the Corporation for Public Broadcasting, the Legal Services Corporation, the National Endowment for the Arts, and more.

Meanwhile, defense spending would be raised by $54 billion over the statutory limit for fiscal 2018 prescribed by a 2011 budget law. Trump would hike defense spending to $603 billion, while dropping nondefense discretionary spending by a corresponding amount to $462 billion.

The bulk of the defense increase would go to the Pentagon, while an extra $1.4 billion would go toward the nuclear arsenal.

Veterans’ programs would also see a 6 percent increase in fiscal 2018 under Trump’s proposal, and the Department of Homeland Security would get a nearly 7 percent boost from fiscal 2017 enacted levels. 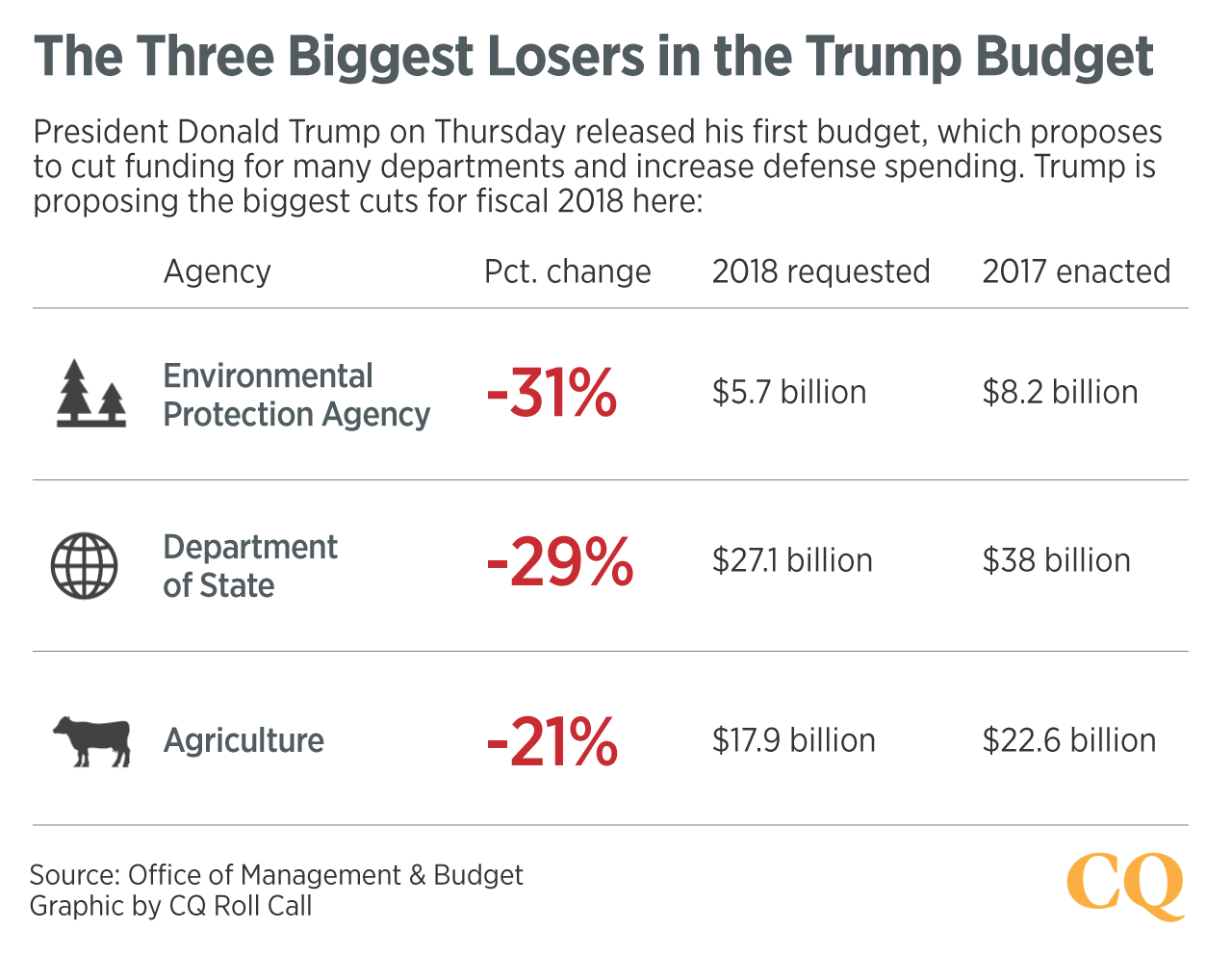 “We must ensure that our courageous servicemen and women have the tools they need to deter war, and when called upon to fight, do only one thing: Win,” Trump said in his budget message. He referred to the large spending cuts as “sensible and rational.”

The budget blueprint does not include Trump’s mandatory spending or tax plans, which will be provided in a full fiscal 2018 budget request expected from the White House in May.

In addition to the extra $25 billion in base defense spending for fiscal 2017, the skinny budget includes an additional $5 billion in Overseas Contingency Operations funding.

Trump also calls for an additional $3 billion in fiscal 2017 funding to begin construction of a wall on the U.S.-Mexico border and to implement other executive orders.

Another $2.6 billion is requested in fiscal 2018 for “high-priority tactical infrastructure and border security technology, including funding to plan, design and construct a physical wall along the southern border.”

Parts of the document have already been declared “dead on arrival” by lawmakers on both sides, a phrase often applied to presidents’ budget requests.

It’s ultimately up to Congress to decide how to spend taxpayer dollars.

Besides most Democrats, many Republicans have balked at some of the more drastic spending cuts proposed by the White House. The bulldozing of the State Department budget, in particular, is viewed as a nonstarter by key GOP lawmakers like South Carolina Sen. Lindsey Graham and Senate Majority Leader Mitch McConnell.

Like most budget proposals, the document is largely a statement of Trump’s priorities. At a briefing Wednesday, his budget chief said the spending blueprint was specifically crafted to put Trump’s campaign promises onto paper.

“This is the ‘America First’ budget,” said Mick Mulvaney, director of Trump’s Office of Management and Budget. “We wrote it using the president’s own words.”