​The decision upholds the lower court ruling that ultimately created new districts for the November congressional elections  and quells any lingering uncertainty over the new district boundaries. Virginia's congressional primaries are scheduled for June 14.

The Supreme Court’s ruling also shapes the law about when members of Congress can interject themselves in legal disputes over the borders of neighboring districts.

The lawyer for the lawmakers, Michael Carvin, had argued that they still should be able to appeal the lower court’s decision when it hurts their chances for re-election — particularly Forbes, who abandoned the 4th District to run in the 2nd District after a court-issued map took effect this year.

The justices disagreed in Monday’s decision in a short six-page opinion.

“Of the 10 current and former members of Congress who are intervenors in this case, only three now claim that they have standing here, Reps. Forbes, Wittman and Brat,” Justice Stephen G. Breyer said in a statement from the bench.

But Forbes has decided to not run in the 4th District regardless of what the court ruled in the case, Breyer said. Brat and Wittman said their chances of re-election will be reduced under the new plan, but did not show that they would be significantly hurt.

“Given the lack of evidence that any of the three representatives has an injury that is redressable by this court, we must conclude that the intervenors lack standing,” Breyer said in the bench statement. 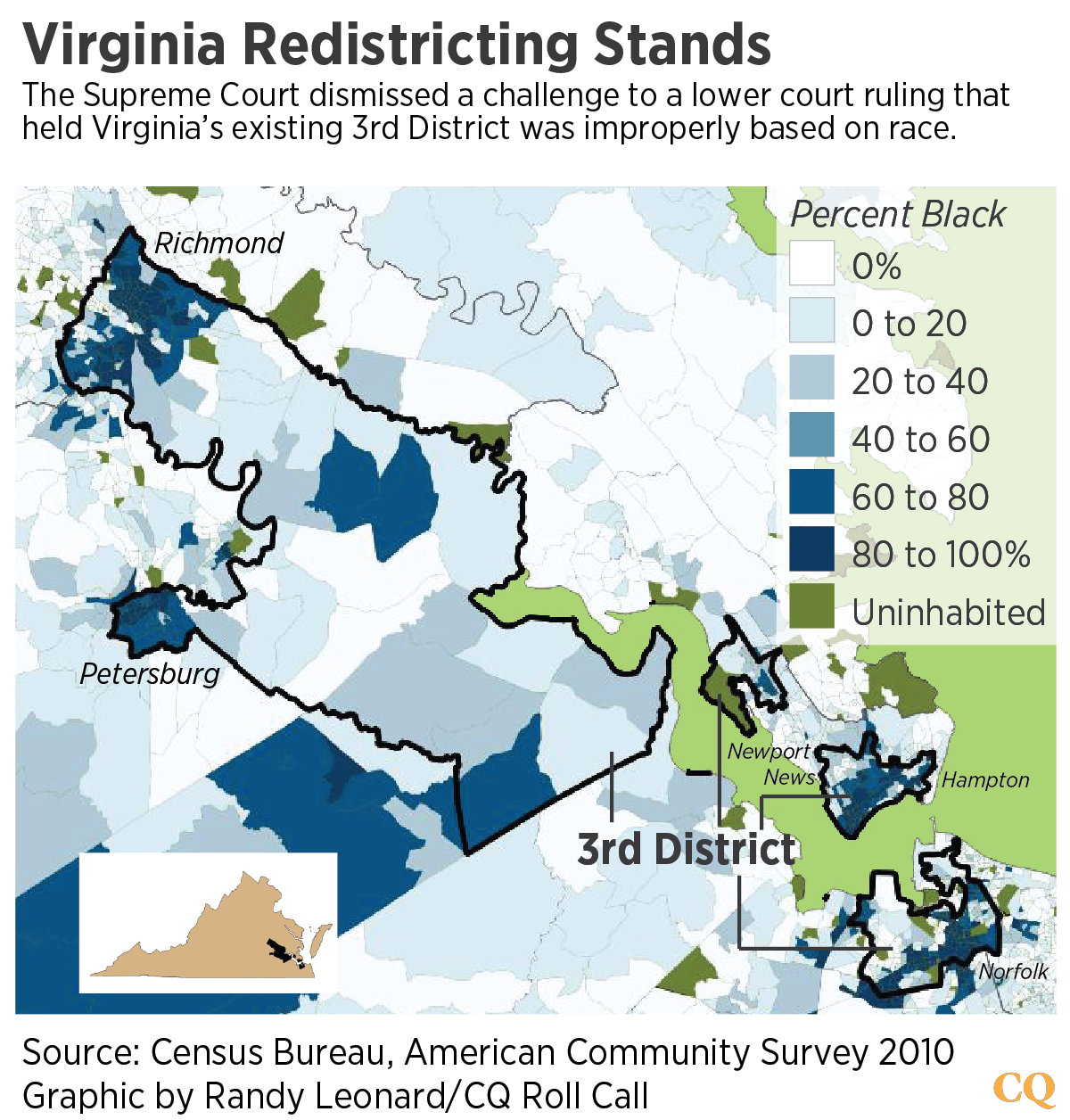 Monday’s ruling means the justices did not have to decide whether the lower-court panel erred when it found race predominated in Virginia’s drawing of the 3rd District lines. A federal three-judge panel in 2014 found those lines to be an unconstitutional gerrymander, and decided Jan. 7 to select a new congressional map and put it into effect for this year's elections.

The court found that the state drew lines to have at least 55 percent black voters in the 3rd District, which was not based on voter patterns but that Virginia's legislature viewed it as a way of obtaining preclearance from the Justice Department under the Voting Rights Act.

The 2nd District, which became slightly more Republican under the new map, opened up for Forbes when Rigell announced his retirement. Forbes will first have to make it through a primary against Virginia Del. Scott Taylor. The district is rated as "Safe Republican" by the Rothenberg & Gonzales Political Report/Roll Call race ratings map.

President Barack Obama twice carried Virginia, and the state’s two senators and governor are Democrats. But Republicans dominate the current congressional delegation with eight seats to the Democrats’ three. Under the new map, the 3rd and 4th Districts are safe for Democrats. In the 4th District, now effectively an open seat , Democrats are expected to rally behind state Sen. Donald McEachin.