Senate Votes to Go to Conference on Zika Spending

Democrats brand public health response the fight of the month

The Senate agreed by voice vote Wednesday night to join the House in formal negotiations over a Zika virus response package, the latest incremental step toward clearing a bill for President Barack Obama's signature.

The vote comes four months after Obama requested $1.9 billion in emergency spending in February to combat the mosquito-borne disease. Informal discussions between House and Senate leaders and appropriators have been ongoing for weeks, but it remains unclear how the chambers will bridge major differences in their Zika legislation.

“We all agree that the Zika virus is a real threat and needs to be addressed,” Senate Majority Leader Mitch McConnell , R-Ky., said. “Republicans and Democrats worked together to pass a bill here in the Senate to provide funding and resources. The House passed its own version. We’re ready now to go to conference and complete a final bill.”

The Senate also voted 46-49 to reject a motion from Bill Nelson , D-Fla., to instruct Zika conferees to reject proposals to rescind existing Ebola virus emergency funds and to insist that Ebola accounts be reimbursed with $510 million.

The House voted in May to go to conference over its proposed $622 million Zika package and other legislation. The Senate passed a $1.1 billion emergency spending proposal last month as part of a broader appropriations package.

The House-passed funding measure is fully offset — no new spending — and would expire at the end of the fiscal 2016 on Sept. 30, while the Senate version is not offset and has no such expiration date. 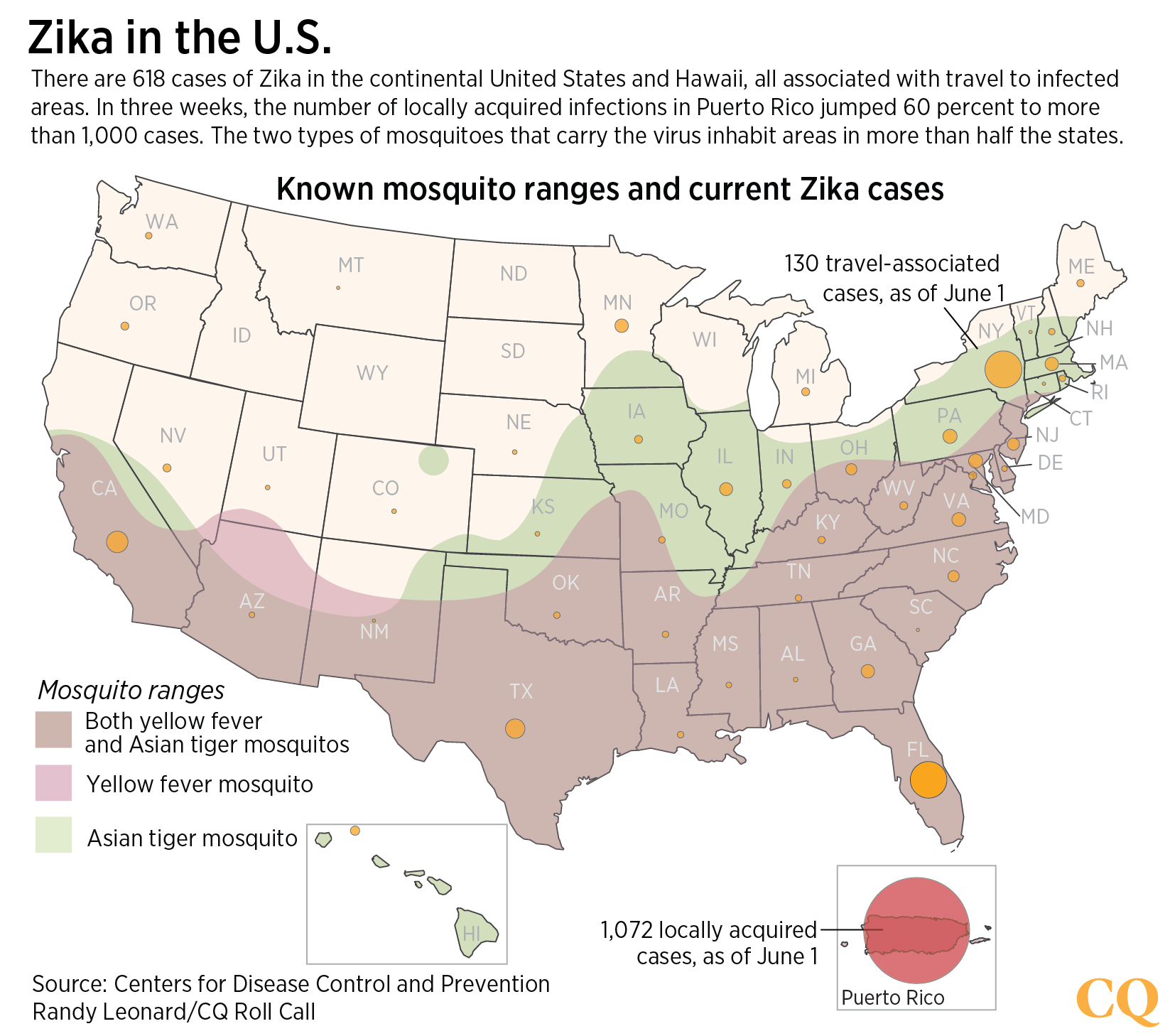 As McConnell spoke on the chamber floor earlier Wednesday, Senate Democrats gathered for a news conference nearby with public health experts and vowed to keep pressing Republicans until a bill was on the president’s desk.

“This is the fight of the month,” said Sen. Amy Klobuchar , D-Minn. “It sure better get done in this work period. What, are they going to go home for six weeks and not have any funding done for Zika as we go into these summer months? That would be atrocious.”

Congress is scheduled to leave town July 15 and return Sept. 6, a break of more than seven weeks.

Democrats have slammed Republicans for dragging their feet since February, urging them several times to cancel multiple recesses since then to stay in town and finish work on a Zika response. Congress blew past the latest deadline set by the Obama administration, which wanted a final bill for the president's signature by the end of May.

Now members on both sides are eyeing the end of June as the next, and most serious, deadline.

“I think our goal is to get this done in the month of June,” said Sen. Roy Blunt of Missouri, a member of GOP leadership and senior appropriator who spearheaded the $1.1 billion compromise measure.

Klobuchar said she wants to “definitely see it before the Fourth of July.”

In mid-April, Barbara A Mikulski of Maryland, the top Democrat on Senate Appropriations, had already tagged July 1 as the deadline for clearing a Zika response. “I don’t mean start it July 1 – complete it,” she said at a committee meeting.

Public health officials have warned that the Zika virus is likely to spread within the United States as mosquito populations grow in the summer months. Health researchers who joined Democrats for the news conference Wednesday said not enough resources are available to perform proper surveillance and diagnostic efforts, so the disease could already have begun to spread in low-income areas that face greater challenges in protecting against mosquitoes.

The experts also said that the administration’s move earlier this year to repurpose nearly $600 million to combat the virus in the absence of congressional action has hurt other public health efforts that the money was meant to support.

Senate Democrats have insisted the $1.1 billion spending level is the bare minimum they would support.

“We wouldn’t have supported it in the Senate if we wouldn’t support it in the negotiations with the House,” Klobuchar said.

The White House hasn’t committed to either supporting or opposing the $1.1 billion Senate package, while it continues to insist on the full $1.9 billion request. But Obama would veto the House’s “woefully inadequate” $622 million version, the administration said.