Sanders Gets Booed Again as He Throws Weight Behind Clinton

Vanquished rival looks forward to delegate support, but says Clinton must be elected

Bernie Sanders took the stage at the Democratic National Convention in Philadelphia trying to empathize with his supporters before leaning into his endorsement of Hillary Clinton, but the ploy didn't work.

They still booed him for promising to help elect the presumptive Democratic nominee — the second time that day Sanders supporters turned on him for backing Clinton.

Sanders's speech started off well. When he took the stage, the unrelenting applause, cheers and chants of "Bernie" delayed the start of his remarks for more than a minute as he tried to quell them with thank yous. The Sanders supporters cheers drowned out the Clinton backers boos as he told his pledged delegates he looks forward to their votes during the roll call Tuesday.

"I understand that many people here in this convention hall and around the country are disappointed about the final results of the nominating process," Sanders said in the beginning of his speech. "I think it’s fair to say that no one is more disappointed than I am. But to all of our supporters — here and around the country — I hope you take enormous pride in the historical accomplishments we have achieved."

That — and his subsequent promise that the "political revolution" they started will continue — drew loud cheers and applause from the crowd.

But then Sanders moved into the second half of his speech where he drew comparisons between Clinton and Republican presidential nominee Donald Trump.

"This election is about which candidate understands the real problems facing this country and has offered real solutions — not just bombast, not just fear-mongering, not just name-calling and divisiveness," Sanders said.

The country needs a leader who will improve the lives of working families, children, the elderly, the sick and the poor and a leader who will bring people together, not insult Latinos, Mexicans, Muslims, women, African-Americans and veterans, he said.

"By these measures, any objective observer will conclude that — based on her ideas and her leadership — Hillary Clinton must become the next president of the United States," Sanders said.

That was when some of the Sanders supporters turned their applause into boos. However, the negative responses appeared to be a minority of the crowd, drowned out by cheers of "Hillary" and "he's with her." 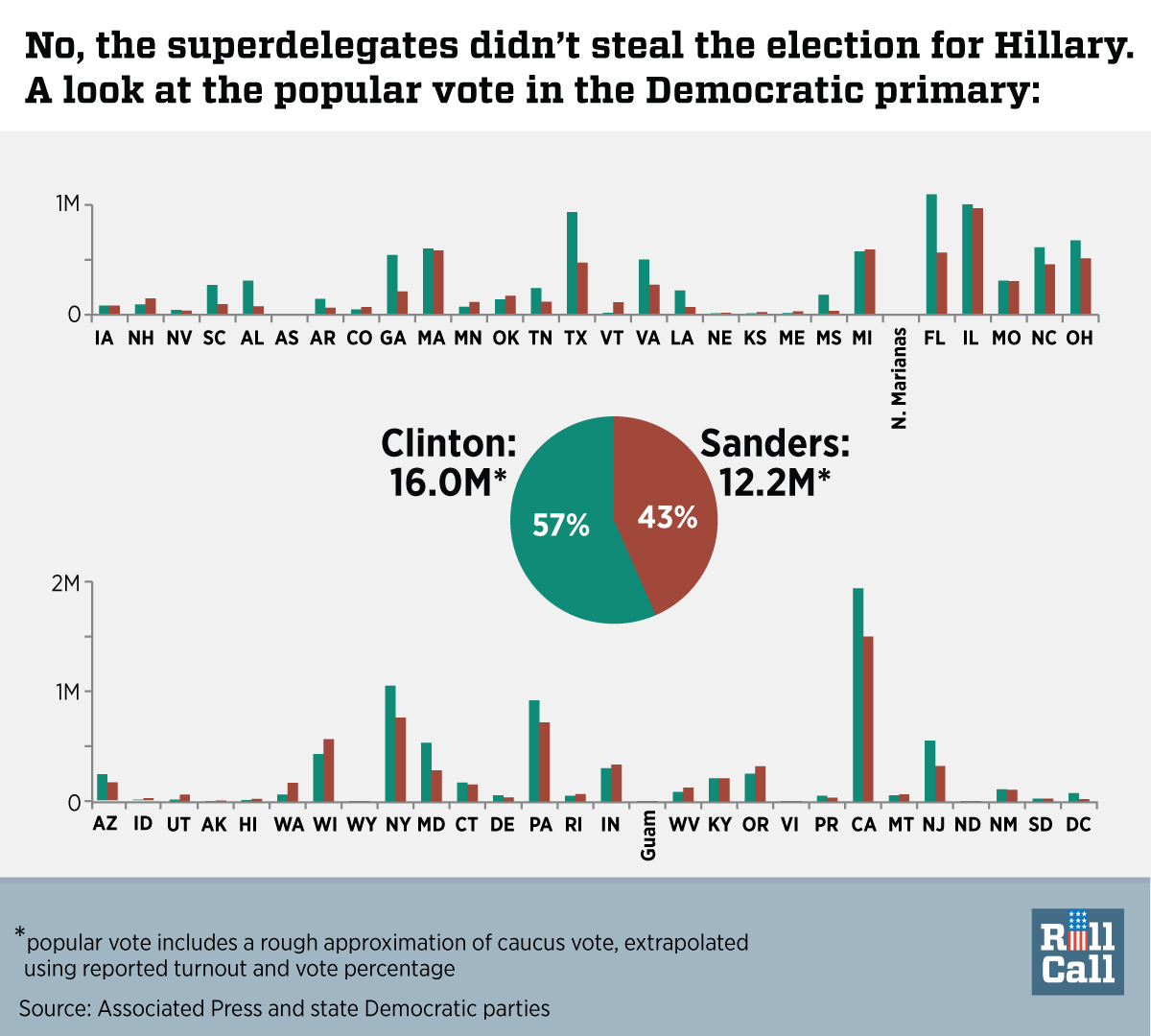 Sanders supporters in the California delegation that had caused commotion during a breakfast earlier that day remained mostly quiet as Sanders laid out his case for supporting Clinton.

As Sanders detailed the policy ideas that he and Clinton both support, the crowd mostly applauded. He said the Democratic platform is one of the most progressive the party has ever produced and highlighted language that suggests strong opposition to "job-killing free trade agreements like the TPP." That prompted chants of "No TPP."

Then Sanders concluded with a full endorsement of Clinton: "Our job now is to see that platform implemented by a Democratic-controlled Senate, a Democratic House and a Hillary Clinton presidency — and I am going to do everything I can to make that happen."

That prompted some more boos from parts of the crowd. But his conclusion also drew chants of "He's with her!" from delegations from places like Oregon and New Hampshire.

Oregon Sen. Jeff Merkley, who had endorsed Sanders, suggested the speech will help bring some of Sanders' supporters on board.

“But what Bernie Sanders reminded us about tonight was the tremendous common ground that he and Hillary Clinton share and how much more common ground they have developed in the weeks since the California primary and what a terrific and powerful president she would be in comparison to Donald Trump.”

Trump, who appeared to be listening, had a different take on the speech.

He tweeted that it was sad to watch Sanders abandon his revolution and welcomed Sanders supporters “who want to fix our rigged system and bring back our jobs” to vote for him. In another tweet he said Sanders “sold out” to Clinton, noting, “All of that work, energy and money, and nothing to show for it! Waste of time.”

Bernie Sanders totally sold out to Crooked Hillary Clinton. All of that work, energy and money, and nothing to show for it! Waste of time.

Niels Lesniewski, Bridget Bowman and Simone Pathe contributed to this report.  Get breaking news alerts and more from Roll Call on your iPhone or your Android.
Get Permissions