Zika Spending Stalemate in Congress Spills Over Into Campaigns

Lawmakers continue their debate over recess

Debate over how a divided Congress should respond to the Zika virus moved from Washington to the campaign trail in the first half of the summer recess, ranging from the presidential campaign to House contests.

While it's not clear yet that fear of the mosquito-borne virus will prove to be a major issue that moves votes, Zika certainly has emerged as a flash point in Florida, the ground zero for infections in the continental U.S.

Democratic Senate candidates in Iowa and Pennsylvania also are using Zika to attack Republicans over the slow pace of congressional action on money for vaccine development, mosquito spraying and more.

A $1.1 billion package providing funds for domestic and international Zika aid stalled in the Senate just before Congress left town in mid-July and as warnings continued from public health officials about the spread of the virus. During the first half of the seven-week recess, the first locally contracted cases of Zika within the continental U.S. were diagnosed in Miami, leading to a travel warning for pregnant women. In addition, Texas reported its first death of a newborn with Zika-related microcephaly. 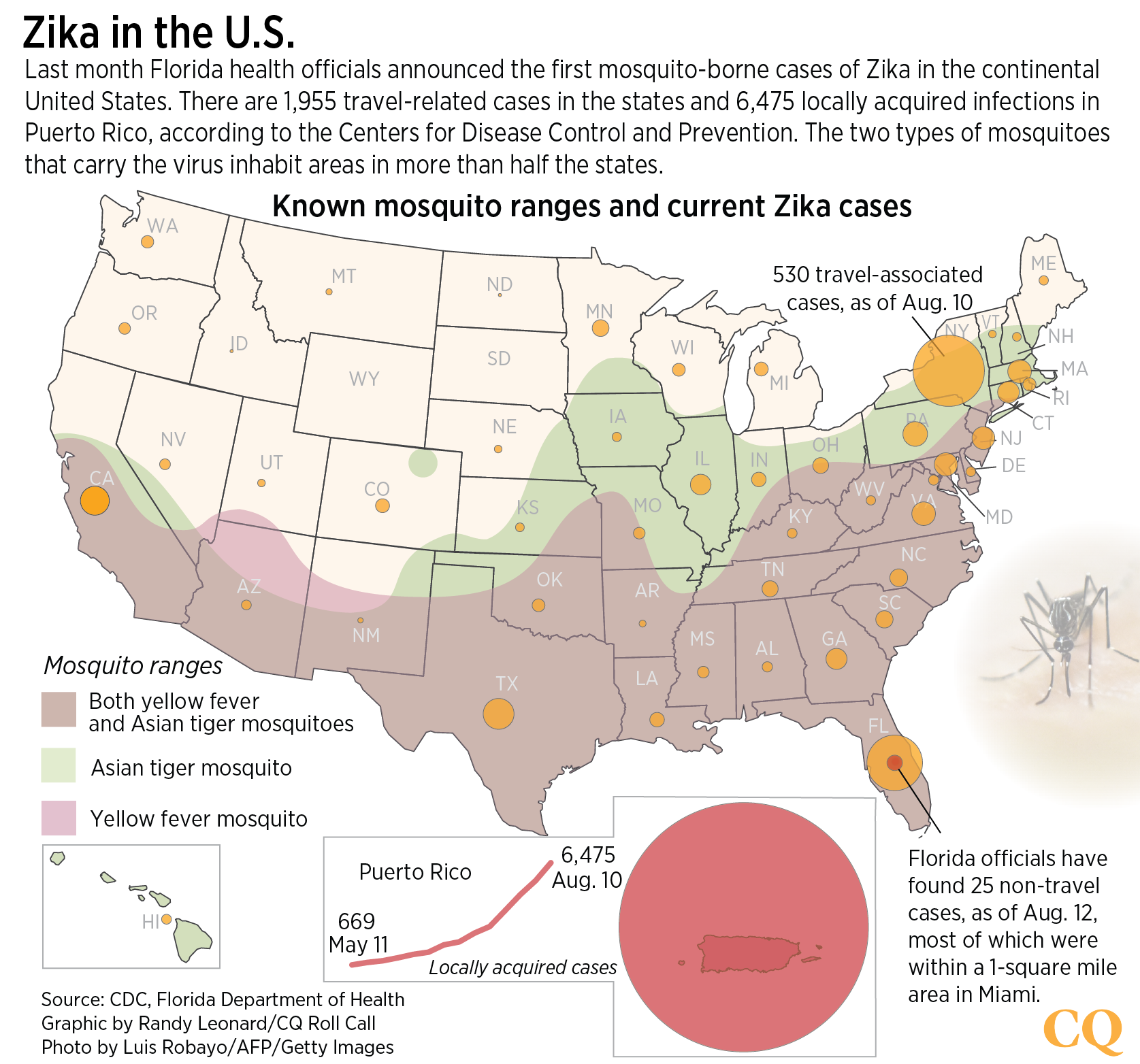 Zika headlined, too, at the Republican National Convention, as Republicans made the case that Democrats were holding up funding. “As we sit here tonight a terrifying mosquito-borne illness threatens expectant mothers and their babies along our Southern coast,” Senate Majority Leader Mitch McConnell, R-Ky., said onstage in Cleveland, while urging delegates to keep the Senate within the GOP’s control.

Hillary Clinton’s presidential campaign is blaming Republicans. The Democratic nominee recently traveled to Miami to urge congressional leadership to bring the House and Senate back into session before their scheduled Sept. 6 return to pass an emergency spending bill.

“I am very disappointed that the Congress went on recess before actually agreeing on what they would do to put the resources into this fight,” Clinton said. “And I really am hoping that they will pay attention."

“I disagree with those who say that Zika is an insignificant issue,” Clinton continued, taking a jab at Republican nominee Donald Trump, who has not said much about the virus.

In the Florida Senate race, Sen. Marco Rubio’s reelection campaign has focused heavily on the issue. He is one of the few Republicans in the country to call for funding the president’s original $1.9 billion emergency funding request, which did not include any offsetting budget cuts.

Then, in early August, Rubio said pregnant women diagnosed with Zika should not be allowed abortions, bringing one of the most contentious social policy debates into the Zika campaign.

"I understand a lot of people disagree with my view — but I believe that all human life is worthy of protection of our laws. And when you present it in the context of Zika or any prenatal condition, it’s a difficult question and a hard one," Rubio said to Politico. "But if I’m going to err, I’m going to err on the side of life."

Murphy rebuked Rubio for those comments.

“Zika is most dangerous for women who are pregnant or thinking of becoming pregnant, yet Marco Rubio still opposes a woman’s right to make her own health decisions,” Murphy said in a statement. “Florida women need a fighter who will stand up for their right to choose and who is committed to getting our state the critical funding needed to fight this virus. It’s clear that Marco Rubio will always put his ideology above women’s health care — and our families deserve better.”

Florida’s 27th Congressional District, which covers most of Miami and sections of Coral Gables, is the swing state’s first House campaign to see a Zika-specific ad campaign, from Democratic hopeful Scott Fuhrman.

His campaign released a 15–second ad in early August criticizing Republican Rep. Ileana Ros-Lehtinen for going on recess with no Zika legislation in place.

In other Southern states that could be affected by Zika, including Alabama, Texas and Mississippi, it's not been much of an issue due to the region’s solidly Republican voting record as well as the makeup of its House districts.

“My sense is it’s not going to be much of a factor in terms of the election and that’s because none of the elections are competitive,” said Richard Fording, chair of the University of Alabama’s political science department. The combination of Alabama's status as a red state and the congressional district map ensures that Sen. Richard C. Shelby and the state’s seven House members are all but guaranteed re-election in November.

“You’d never know there is an election going on here,” Fording said.

Mississippi is similar. Conor M. Dowling, associate professor of political science at the University of Mississippi, said the state’s House races aren’t close, so little has been heard about Zika.

In Texas, Senate Majority Whip John Cornyn, who is not up for reelection this year, has been talking about the issue frequently, as have Gov. Greg Abbott and Lt. Gov. Dan Patrick. “We certainly are seeing that Zika and the federal Zika funding issue are hitting on all cylinders here,” said Sherri Greenberg, Fellow of Max Sherman Chair in State and Local Government at the University of Texas.

But it won’t matter for almost all of the state’s House members, who are in safely drawn districts in a conservative state, she said.

One exception is Texas’ 23rd District, where Republican Rep. Will Hurd is seeking reelection against former Democratic Rep. Pete Gallego. Covering much of the state’s Southwestern border, the large area is one of the few remaining contested districts in Texas, according to Greenberg.

Gallego’s campaign criticized Hurd in June because he supported having the Obama administration move money from Ebola accounts to combat Zika. Gallego also rebuked the Republican-controlled House for not having moved faster to fund a Zika response, saying in a statement it was "indefensible that Congress would add to the natural stress of expectant parents by failing to address the danger of Zika in our region or anywhere in the country."

Polls show Americans are concerned but not panicked. An online, opt-in Economist Group/YouGov poll found 65 percent of voters surveyed are following news about Zika very or somewhat closely, with 64 percent of those polled saying they are very or somewhat concerned about the spread of Zika within the United States.

As far as which political party faces greater political repercussions for Congress not having passed a spending bill, 27 percent of those polled said Republicans face a greater risk, while 15 percent said Democrats are at risk from the stalemate. The remaining 58 percent were unsure.

Toomey voted for the Cornyn plan that would have approved $1.1 billion in offset funds. But Toomey opposed the Blunt-Murray bipartisan agreement as well as the Rubio-Nelson proposal.

“This is deeply troubling,” McGinty said of Toomey's votes. “Public health officials have made it crystal clear the urgency and the amount of funding that is needed effectively to combat the threat. Partisan political games should never take precedence over protecting public health and safety.”

In late June, her campaign critiqued his vote on the Republican-written conference report on Zika funding, saying that "the bill Toomey supported today is a joke."

Toomey’s campaign has not criticized McGinty on Zika, but he has gone after Democrats for blocking the conference report in the Senate.

“I can hardly believe that my Democratic colleagues are playing partisan politics and obstructing this bill,” Toomey said in an official statement.

In Iowa, Sen. Charles E. Grassley’s votes have been brought up by his Democratic rival Patty Judge. Grassley voted for the Blunt-Murray agreement as well as Cornyn’s proposal, but against Rubio and Nelson’s amendment.

“Today @ChuckGrassley voted against multiple bipartisan bills to fight the Zika virus. This is a serious threat, Iowans expect action #iasen,” Judge tweeted at the time.

Since then, she has further criticized Grassley including a statement in late July where she said she “couldn’t be more disappointed in Senator Grassley’s partisanship” or “more concerned about stopping the Zika threat.”

Grassley responded in August with an op-ed detailing his votes.

“There’s an effort to distort my votes on spending to fight the Zika virus to make it seem as if I don’t care about women and children’s health,” he wrote. “That’s not the case.”

With the September session of Congress a few weeks away, Congress still could send a bill to the president’s desk before the election.

But if the stalemate continues and Zika cases continue to rise, politicians in swing districts will have to carefully craft their message to voters.

“The protests against Congress will only grow as Zika grows in the United States and if before the elections we end up having an epidemic here, I think, it could have significant political ramifications,” said Lawrence O. Gostin, faculty director of the O’Neill Institute for National and Global Health Law at Georgetown University Law School.

“Congress has no greater duty than to protect the public’s health and the fact it simply went on recess at the moment when an epidemic was hitting our shores will be seen as wrong and unethical.”