What's a Vulnerable Republican To Do?

Hug him, hate him, pretend he isn't there.

Those are the choices that down-ballot Republican candidates now face with Donald Trump as the last man standing in the Republican primary for president.

Do they run away from Trump, whom the Republican National Committee has declared the presumptive nominee ? That strategy risks alienating the party's base.

But embracing Trump risks repelling voters that the GOP desperately needs to court, like women and minorities.

For Republicans who dare to talk about the dilemma , the answer lies somewhere in the middle.

The morning after Texas Sen. Ted Cruz dropped out of the race, and even before reports that Ohio Gov. John Kasich was planning to do the same , New Hampshire Sen. Kelly Ayotte's campaign indicated that she would support Trump.

"Kelly plans to support the nominee," Ayotte campaign spokeswoman Liz Johnson said in a statement Wednesday that did not mention Trump by name.

It doesn't matter that that nominee looks almost surely to be Trump. Ayotte still isn't endorsing him.

"As a candidate herself, she hasn't and isn't planning to endorse anyone this cycle," Johnson said.

"It’s an absolute political tightrope," said former New Hampshire GOP Chairman Fergus Cullen, a vocal Trump critic. "And there are so few historical examples to show the way. In fact, most of the history suggests it’s impossible." 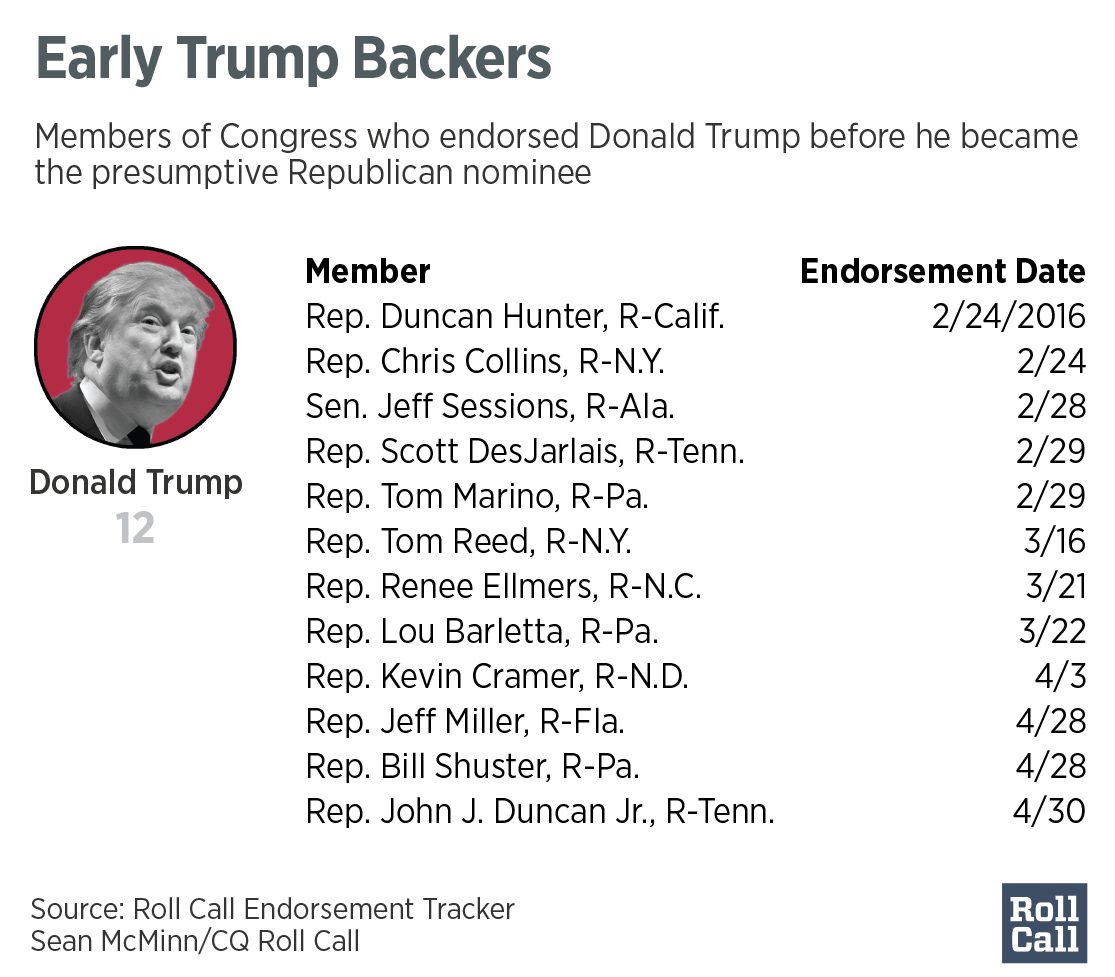 So how should an incumbent answer the question of whether he or she is backing Trump?

"I’d avoid it if I could," said Ohio Republican Bob Kish, a consultant to House candidates around the country. This year's most vulnerable incumbents are doing a pretty good job of that. For months, many of them have been saying they'd support the Republican nominee without naming names.

The Senate is on recess, but the staff of vulnerable incumbents reached by Roll Call on Wednesday still refused to say the name "Trump."

North Carolina Sen. Richard Burr's campaign said much the same. But Burr himself was willing to go one step more. He  tweeted  Wednesday afternoon that he looks forward to working with Trump at the top of the ticket.

Ohio Sen. Rob Portman, who had backed Kasich, said in March that he planned to support the Republican nominee in the fall "unless something crazy happens."

Wisconsin Sen. Ron Johnson suggested to CNN last month that having Trump at the top of the ticket could help his own re-election effort by driving up turnout, but he hadn't endorsed the front-runner. His campaign said Wednesday Johnson's position hasn't changed.

"As Ron has repeatedly said for months, he intends to support the Republican nominee, but he's focused on the concerns of Wisconsinites — not national political winds," said Johnson campaign spokesman Brian Reisinger.

[Related: Senate GOP Campaigns Prepare for the Worst: Trump] All of that rhetoric is a way of answering the question without actually saying the words that could haunt them this fall.

"I support the nominee sounds a little better than I support Donald Trump," said Kish, the Ohio consultant.

Even a tepid embrace of Trump leaves incumbents like Ayotte in a precarious position in a general election.

"If a candidate is defined by who they are supporting for president they were bound to lose regardless of the environment," said Josh Holmes, a Republican strategist and former chief of staff to Senate Majority Leader Mitch McConnell.

Many incumbents began their re-election efforts well before Trump came on the scene, said Amber Marchand, a former press secretary for the National Republican Senatorial Committee. Some of those candidates may even be getting more money from big donors who are disillusioned with Trump, she said.

But distancing themselves from Trump isn't easy since national issues dominate many Senate races, Cullen said. In that environment, the political fallout can be indiscriminate.

"So many elections are not like Passover where there’s blood on the door signifying that's the good Republican or Democrat," Cullen said. "They all get killed."

And yet, any GOP incumbent's localized general election message still needs to reflect the frustration that Trump has tapped into.

"Go ahead and empathize with the voters, because they’re telling you they’re not happy," said Kish. "Don’t be the happy warrior."

That could be good advice for Ayotte. She still could face a challenge from the right in a late September primary, before the November general election. She already has one primary challenger, and with a June 10 filing deadline, she could still draw others.

"Sen. Ayotte has a real issue — she can’t afford to antagonize Republican primary voters," Cullen said. "I don’t think she’ll get upset in the primary. But... there could be a problem if she were to condemn Trump." — Bridget Bowman, Alex Roarty and Niels Lesniewski contributed to this report. Contact Pathé at  simonepathe@rollcall.com  and follow her on Twitter  @sfpathe. Get breaking news alerts and more from Roll Call on your iPhone or your Android.