Veteran Peace Corps volunteer Steve Driehaus has rededicated himself to fulfilling President John F. Kennedy’s vision of bringing the world together via international service — a goodwill mission he worries is being seriously undermined by all the vitriol spewed by the presidential contenders.

“The apparent hostility toward foreigners that now seems to be so common on the campaign trail is confusing to our friends abroad,” the single-term lawmaker, who is currently serving as country director in Morocco, told Roll Call of the way the incessant sound bites trumpeting impossibly high walls and punitive anti-immigrant policies are playing overseas.

“It is important for us to remember that what is said in the heat of battle, often to mobilize the partisans in our political process or to engage the apathetic, is heard by our friends abroad,” he warned pols with access to open mics.

Driehaus caught the travel bug while in college, signing up for a semester abroad (he wound up in Luxembourg) during his junior year. He continued racking up frequent flier miles post graduation, landing an assignment from the Peace Corps to improve living conditions in Senegal from 1988-1990.

Current Members with Peace Corps experience (and where they volunteered):

Driehaus immersed himself in politics after returning stateside, working his way up from campaign staffer to serving in the Ohio legislature.

In 2008 he interrupted then-incumbent Republican Steve Chabot’s tenure in Washington by convincing voters in the first district that it was time for a change. Chabot reclaimed his seat during a rematch the following November, a twist of fate that prompted Driehaus to re-up with the Peace Corps, his home (far) away from home for the past six years. 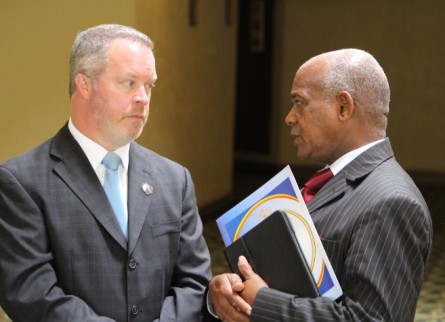 Though now thousands of miles away from the battleground states GOP- and Democratic-hopefuls with designs on the Oval Office continue stumping in, Driehaus says all the bluster voiced by the base-stirring leaders resonates beyond the individual town halls.

“It is hard to explain to my friends here [Morocco] the rhetoric we hear coming from the campaign trail. It is the antithesis of what they know the United States of America to be,” he said. “As flawed as we are, we still serve as the example for so many countries abroad.”

But it is doable.

He pointed to a plan developed by New Arab Foundation founder Sami Jamil Jadallah to foster better understanding between the Middle East and the remainder of the globe as the step in the right direction. The proposed “Arab Peace Corps” initiative would aim to recruit politically motivated youths that might otherwise fall in with the self-styled Islamic State.

According to Driehaus, uniting people of different races, religious beliefs and/or socio-economic backgrounds under the banner of the shared human experience is essential to bridging long-standing divides.

“It makes us a better country when men and women in remote villages and forgotten corners of the world have the ability to live and work with Americans every day. It is hard work, but it is rewarding,” he shared.

Driehaus remains hopeful that a new generation of activists will rally to the cause.

The question is whether the example set by those that heeded 35’s original call will survive the rough-and-tumble electoral brawl.

“I hope that our work in promoting peace and cooperation is able to withstand the caustic rhetoric that campaigns seem to employ daily, not to bring out the best in America, but to play to our lowest common denominator,” Driehaus said.