Some Conservative Women Troubled by Trump 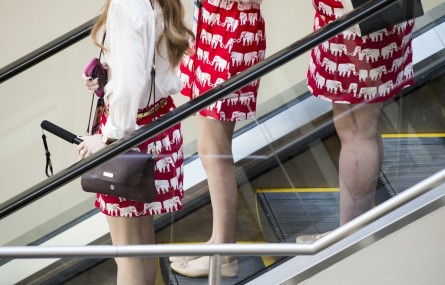 Women in matching red elephant skirts ride the escalator at the CPAC conference. Some think Donald Trump could have problems in a general election fight over comments some view as sexist. (Photo By Bill Clark/CQ Roll Call)

As we all know by now, Donald Trump wants the voters of America to know that he is well-endowed, that women love him, and that he "cherishes" them.

But some of the women in his party aren’t impressed.

As Trump and Democrat Hillary Clinton lead the field in this year's presidential campaign, both are preparing appeals to the swing-voting women voters they'll need to win.

Cheryl Lankes of Florida nodded and rolled her eyes at the mention of his name. "His book even has quotes of him slamming women," Lankes said at last week's Conservative Political Action Conference in Maryland. "You can tell by his body language that he doesn’t really respect women.”

Adrienne Carrier, a Hillsdale College student, said at CPAC that she won't support Trump as a nominee under any circumstances, in part due to his comments about women.

“I think the executive should represent the United States with dignity and with grace, and I think Donald Trump is the opposite of that in so many ways,” Carrier says. “That would be a real big problem for me.”

Carrier is supporting Cruz for president, and said she’ll vote for a third candidate, likely libertarian Gary Johnson, if Trump is the nominee.

Muffin Grant, who came to CPAC from Charlotte, N.C., has some serious complaints about her party's front-runner, too: "I don’t like how he talks, how prickly he is, how defensive he is." Her friend Connie Dunn, also from Charlotte, said that she thinks Trump is "egotistical."

"But, we would rather have Trump than Hillary Clinton," Grant added.

Alexandra Smith, who chairs the College Republican National Committee, doubts that Trump’s comments will hurt his standing with women.

“Our candidates don’t have to be in perfect sync with a voter on every single issue, or with every tone or with every word that’s said,” Smith said in an interview after a session at CPAC that focused on the female vote.

Some women said they were rejecting Trump not for anything he's said about women, but because they don't consider him conservative enough. Others wore their support for Trump literally on their sleeves, with buttons or shirts or “Make America Great Again” hats. And, for them, neither Trump’s comments nor his demeanor are an issue.

“Absolutely not,” said Tracey Lewis, 53, of Pawleys Island, S.C. “He’s not a politician,'' said Lewis, who was wearing a Trump 2016 shirt. "And if you look at the successful women in his corporation, including his daughter ... there’s no way that you can square that circle.”

On Capitol Hill, Republican women have not been noticeably more critical of Trump  than their male counterparts.

Asked about some of Trump's specific comments about women, including remarks suggesting that Fox News anchor and debate moderator Megyn Kelly was menstruating and that his GOP rival Carly Fiorina was unattractive, she was unequivocal:  “Across the board, absolutely this is wrong,” said McMorris Rodgers, the highest ranking female Republican in the House, in response to a question. “It’s inappropriate.”

Yet like many of her male colleagues, McMorris Rodgers did not rule out supporting him in a subsequent interview. “We still have a long way to go; I’m not making that decision.”

Dianne Bystrom, director of the Center for Women and Politics at Iowa State University and author of several books on women, gender and politics said that Trump's current popularity poses a problem for all Republicans.

Those who distance themselves from him now risk losing the support of the sizable portion of the electorate that is voting for him, she said. Those who don’t -- especially candidates in moderate districts -- become vulnerable to attacks from Democrats, who will undoubtedly seize on Trump’s perceived sexism to gain an edge with women. She predicted a rash of advertisements featuring some of Trump’s choicer sound bites.

“These comments he made will live on in ads,” she said. “When you make remarks like this, it lives on for eternity.”

There would be no shortage of fodder for such ads, including Trump’s infamous comment that Megyn Kelly had “blood coming out of her whatever,” his assessment that Hillary Clinton had gotten “schlonged" by Obama when his campaign prevailed in '08, and his crude, rude Howard Stern interviews, unearthed recently by BuzzFeed, detailing which female celebrities he would sleep with and rating them by the size of their breasts.

Then there was this doozy from the March 3 debate: "And, he referred to my hands -- 'if they're small, something else must be small.'” Trump said, a reference to Florida Sen. Marco Rubio's description of Trump's fingers as stubby.  “I guarantee you there's no problem. I guarantee.”

Roll Call Race Ratings Map: Ratings for Every House and Senate Race in 2016 Get breaking news alerts and more from Roll Call in your inbox or on your iPhone.