Senate Republicans Became More Bipartisan in the Last Congress — Democrats, Not So Much

Sens. Elizabeth Warren, D-Mass., and Susan Collins, R-Maine, talk before a committee hearing. Collins was identified in a report as the most bipartisan senator of the 114th Congress. The report ranked Warren 88th. (Tom Williams/CQ Roll Call file photo)

Senate Democrats, once happy to rail against what they called obstructionist Republicans in the chamber, flipped positions with their friends across the aisle when it came to partisanship in the 114th Congress.

A new report from the Lugar Center and Georgetown University shows that most senators — almost two-thirds of the chamber — acted more bipartisan when it came to cosponsorships on bills during the most recent Congress, compared to the Congress before.

“We are encouraged to see that even many lawmakers with strong ideological positions have found more common ground with their colleagues across the aisle,” said Lugar Center President Richard G. Lugar, who served as a Republican senator from Indiana for more than three decades. “Cooperative efforts to address real challenges is what the American people want to see from their leaders, and we are hopeful it will be a growing trend during the 115th Congress.” 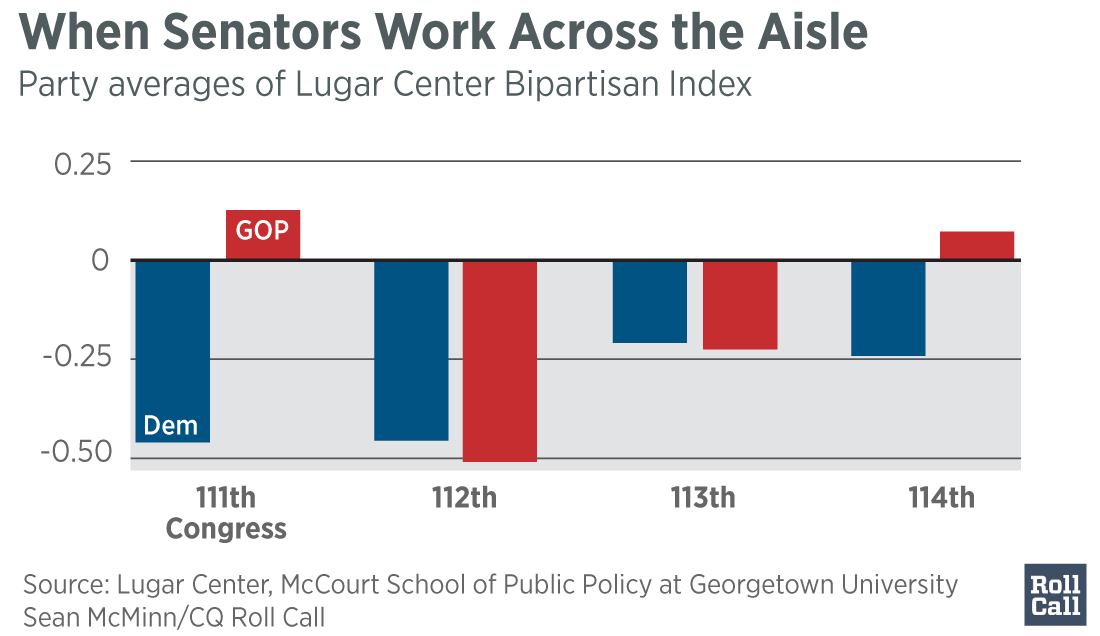 The Lugar Center uses a formula that rates each member of Congress on how bipartisan they act based on cosponsorship of bills. The score objectively factors in how often members sponsor bills that attract support from across the aisle, as well as how often bills they cosponsor were originally introduced by members of the opposite party. It also uses a measurement the center has dubbed the “bipartisan intensity” of bills, which grows as more members sign onto a bill who are not in the same party as the bill’s sponsor.

The scores in the 114th Senate represent the second overall uptick in a row, following the extremely partisan 112th Congress. That Congress, when gridlock overtook Washington following the wave of far-right Republican winners in midterm elections, was the least bipartisan the center has on record, said Dan Diller, the director of policy at the Lugar Center.

Since then, “especially in the Senate, there were impressive figures in the number of senators who improved,” Diller said.

Consistently near the top of the list, Republican Sen. Susan Collins of Maine was named the most bipartisan senator for the second Congress in a row. In a press release, she said that because of “today’s highly charged partisan atmosphere, it is more difficult than ever to find common ground.”

Democratic Sen. Joe Donnelly of Indiana came in second — one of only three Democrats in the top 10.

Last in the rankings was Sen. Bernie Sanders, one of the two independents in the chamber. Sanders, who caucuses with Democrats, spent much of the 114th Congress on his failed run for the Democratic presidential nomination and developed a nationwide reputation as a staunch liberal.

Republicans Ted Cruz of Texas and Richard C. Shelby of Alabama joined Sanders near the bottom of the rankings.