Republicans keep majority in winning some races they had written off

Democrats spent months plotting how they could take back the Senate: Win Pennsylvania, steal an unexpected victory in Missouri, and up the score in blue states like New Hampshire, Wisconsin, and Illinois.

All of their paths to a majority — every one of them — was built on the idea that Hillary Clinton would comfortably win the presidential race. As it turns out, that was a fatal flaw.

The almost unfathomable strength of Donald Trump in Tuesday’s election gave Senate Republican candidates a boost they didn’t expect but happily embraced. It not only led them to keep a majority many top GOP officials considered in serious jeopardy, but win races they had long since considered lost. 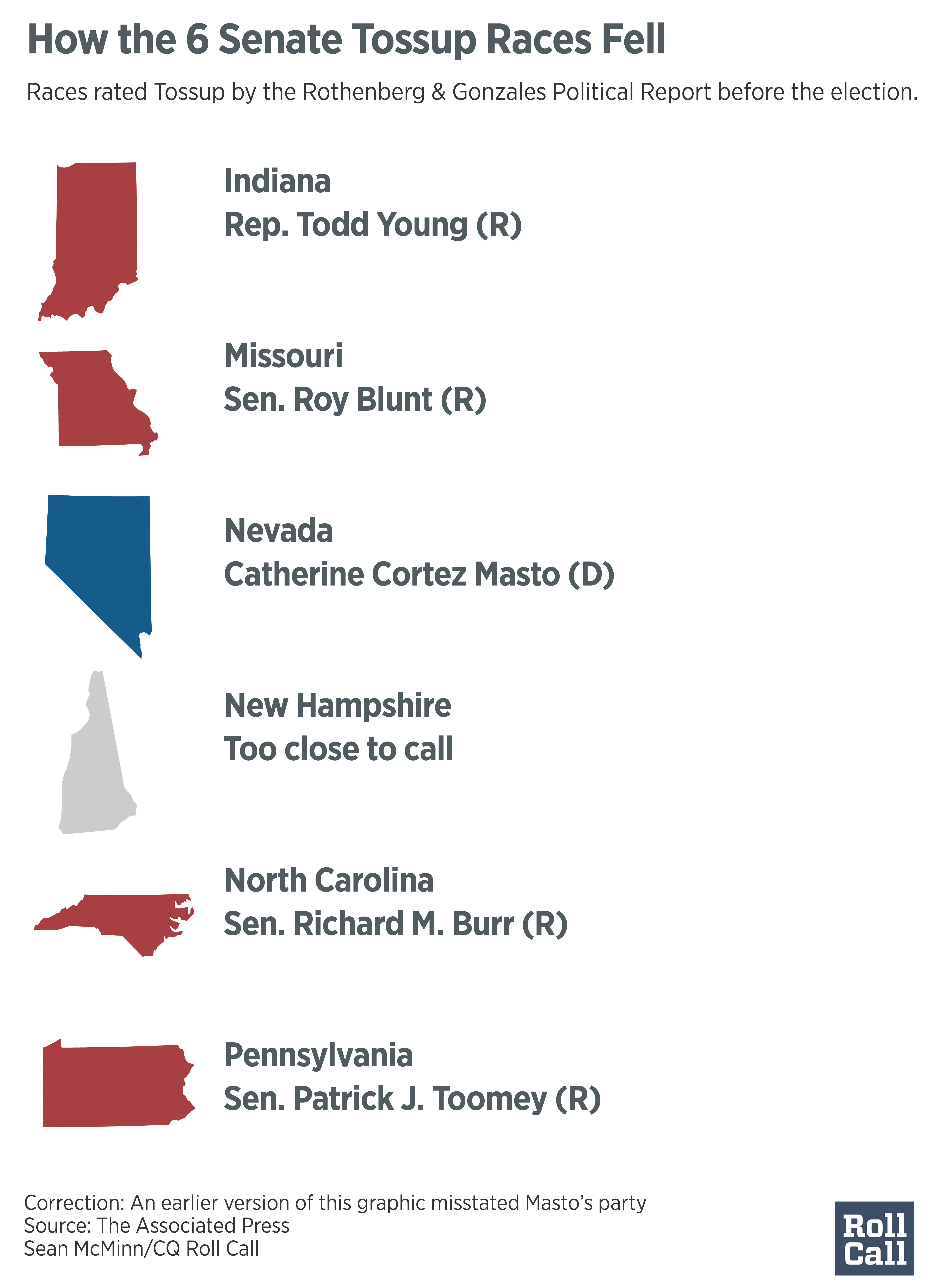 Instead of losing their majority, the GOP is on track keep control of the Senate — and possibly lose just one seat.

“Trump’s message resonated very deeply with a huge population of working class voters and their desire for change lifted Republicans across the map on Election Day,” said John Asbhrook, a Senate GOP strategist.

The pro-Trump surge was evident in Indiana, where GOP Rep. Todd Young dispatched former Sen. Evan Bayh by roughly 10 points thanks to a surge in Republican turnout.

It was evident in North Carolina, where both parties expected a very tight race only to see Sen. Richard Burr win with relative ease, by almost 6 points.

It was evident in Pennsylvania, a race that was considered a dead heat until well into the night. Sen. Patrick Toomey eked out an almost 2 point victory.

And it was most evident in the night’s most shocking Senate result, in Wisconsin, where Republican Sen. Ron Johnson crushed former Democratic Sen. Russ Feingold.

A Johnson victory was unthinkable as recently as a month ago, when most Democratic and Republican officials had all but written the race off. Democrats, in fact, considered the race a sure victory since last year, when polls in the state showed Feingold winning by more than 10 points.

Polls showed it tightening late, and outside groups from both parties poured money into the state in the race’s final weeks. Even then, Republicans expressed doubt he could come out on top because of the state’s partisan lean and the headwinds faced in the presidential race.

Instead, Trump won Wisconsin. And Johnson won 50 percent of the vote — about three points clear of Feingold.

“Obviously, Trump exceeded expectations every bit as much as Hillary Clinton fell short of both expectations and Obama’s 2012 results,” said Doug Heye, a Republican strategist.

As of early Wednesday morning, Democrats could only win as many as 48 seats in the Senate — pending the outcome of the too-close-to-call race in New Hampshire.

Republicans also won races in Missouri and Pennsylvania, both of which Democrats thought they could win.

The discrepancy between Trump’s expected performance and what actually happened was perhaps most evident in the number of seats Democrats thought they needed to win: 50. Though not a majority, the assumption among party strategists was that Vice President Tim Kaine could cast a tie-breaking vote in favor of Democrats.

That is not the case now that Trump has won. Mike Pence will be the vice president, and the GOP can cast the tie-breaking vote.