Who's Mike Pence and Why Has Trump Picked Him?

He has a credible record of executive accomplishment, pushing to enactment the largest tax cuts in Indiana history and an elimination of the state’s estate tax during his term as governor.

Before that, he had a diverse and lengthy experience as a congressional playmaker over six terms in the House, having headed the caucus of the most conservative members and also holding the No. 3 position in the Republican leadership.

His rhetoric has a punchiness that may fairly be labeled “attack dog” in style, but he also prefers the sort of messaging discipline and cool-headed tone of voice– “Rush Limbaugh on decaf,” in his own words – that Trump hyperkinetically eschews.

Hawkings on Pence: ‘Almost Everything Trump is Looking For’

He counterbalances Trump’s weaknesses in other ways. From his time on the Hill and on the executive committee of the Republican Governors Association, he is plugged in to many of the wealthy GOP donors, Main Street advocates and Wall Street lobbyists with whom the presumptive nominee has rocky relations.

He knows about international affairs from his time on the House Foreign Affairs Committee, where supporters of Israel view him as an unambiguously reliable ally.

[ Trump and the Ultimate Outsider-Turned-Insider ] 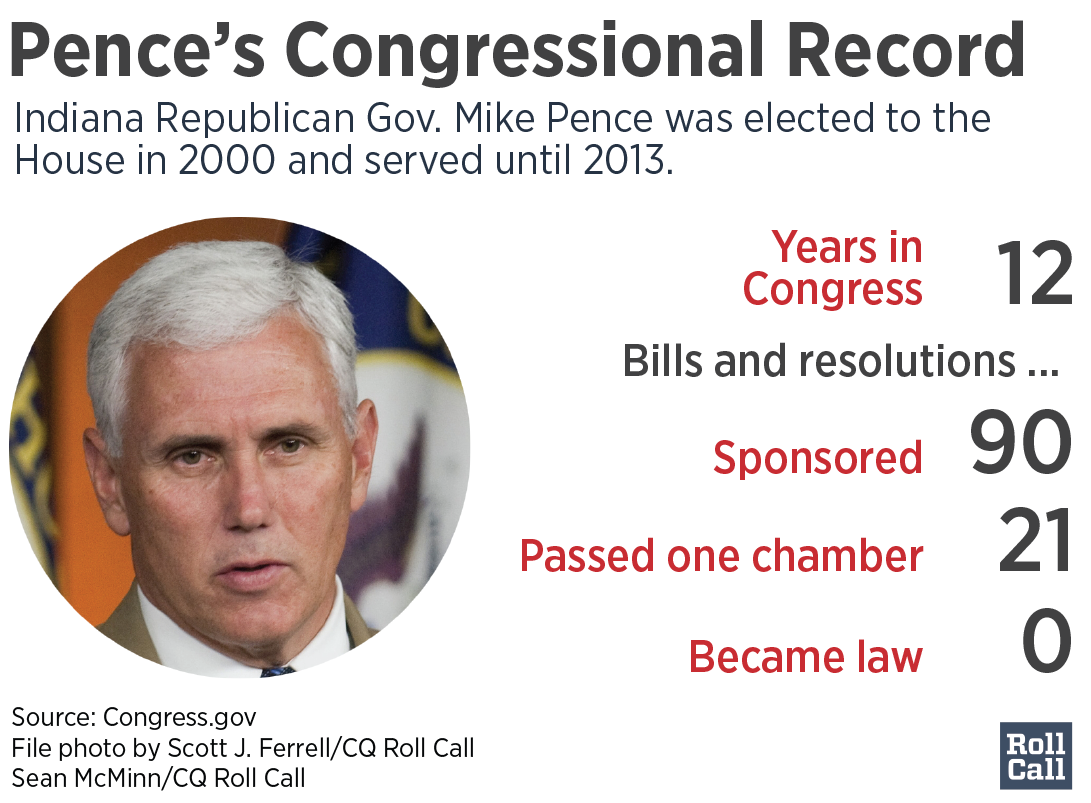 His credentials in the eyes of grassroots conservative and evangelicals approach the unimpeachable, whereas the tea party-types and the religious right continue to view Trump with considerable suspicion. His mantra at the Capitol was that he was “a Christian, a conservative and a Republican — in that order.”

That prioritization did not always sit well with his colleagues, either on the ideological edges of the House GOP or in the leadership suites, because it led him to some iconoclastic positioning that sometimes displeased the hard right and other times annoyed the establishment. But he was reliably able to persuade critics that his views were consistent with his principles, and was broadly popular in both GOP camps by the time he left the Capitol for the governor’s mansion in 2012.

[ Running for Governor? The House Might Not Be the Place to Start ]

Pence’s tenure has produced approval ratings well below 50 percent this summer, so it made sense for him to grab this 11th hour opportunity to forgo a tough race for re-election in favor of a shot at a much bigger prize.

Although the state’s economy is strong and unemployment low — realities he ascribes to his pro-business deregulatory policies — Pence has struggled to overcome the biggest controversy of his term, one which has managed to alienate both moderates and conservatives.

The resulting wave of threatened boycotts — from those labeling Indiana newly intolerant of lesbian, gay, bisexual and transgender people — prompted the business community to persuade Pence to sign new legislation designed to prevent state law from usurping local human rights protections. That only prompted more anger, albeit entirely on the right, from people who said Pence had sold out his principles. 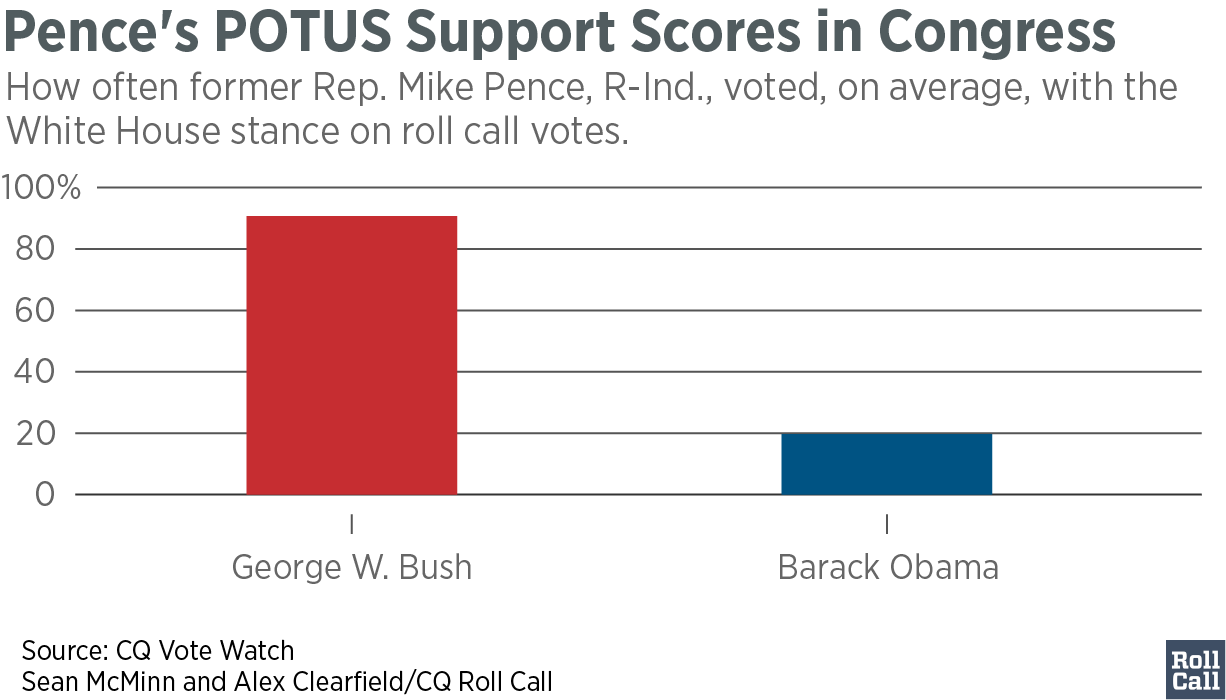 There was no criticism of Pence as a panderer in the culture wars during his time at the Capitol. His reputation as a culture warrior was unsullied. He opposed federal spending on embryonic stem cell research, was active in efforts to advance a constitutional amendment against same-sex marriage, fought expansion of abortion rights and got new federal funding for Planned Parenthood cut off for a time.

[ Planned Parenthood Once Had GOP Pals ]

More provocative are the varied ways in which he went against the Republicans.

He fought against the No Child Left Behind education law and worked even harder to muster conservative opposition to the creation of the Medicare prescription drug benefit; he viewed President George W. Bush’s top first-term top domestic policy objectives as overly broad and unduly expensive expansions of federal reach. He opposed Bush at the end of his tenure, as well, on the massive infusions of federal help for Wall Street and the auto industry during the 2008 economic calamity.

Perhaps his furthest stray from orthodoxy came a decade ago, when he proposed a comprehensive immigration bill that would have required illegal immigrants to leave the country but would have allowed them to eventually return and become eligible for U.S. citizenship. Pence said the Christian virtues of thriftiness, hard work and second chances should be honored, siting the example of a beloved grandfather who emigrated from Ireland in 1923.

Michael Richard Pence was born on June 7, 1959, in Columbus, a small city 45 miles south of Indianapolis known for its impressive array of modern architecture. His father ran a group of gas stations. The family was Irish Catholic and Democratic, and President John F. Kennedy was practically an icon. But Pence’s political views changed after he joined an evangelical fellowship group at Hanover College. He met his wife, Karen, at an evangelical church service, where she was playing the guitar.

In 1988, at age 29, Pence challenged veteran Democratic Rep. Philip R. Sharp in Indiana's 2nd District and lost by 6 percentage points. Two years later, Sharp won again, by almost 19 points. In the latter race, Pence ran a harshly negative campaign. He later repented with an article called “Confessions of a Negative Campaigner,” in which he wrote, “It is wrong, quite simply, to squander a candidate’s priceless moment in history, a moment in which he or she could have brought critical issues before the citizenry, on partisan bickering.” 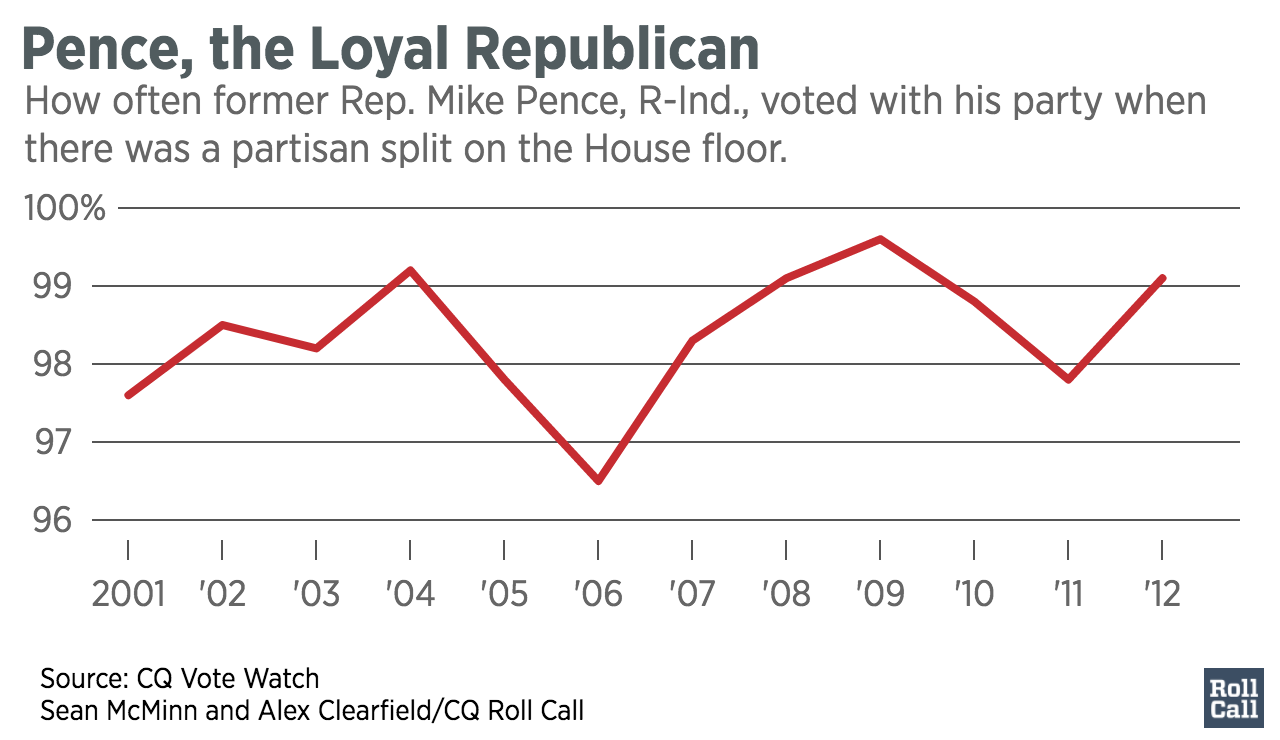 It was during that period that Limbaugh captured Pence’s imagination. Pence’s first radio show aired in 1989 in Rushville, Indiana. He eventually built up a syndicated talk show that was heard on 18 stations across Indiana, sometimes as Limbaugh’s “warmup act.”

His years as a radio broadcaster and host of a public affairs television show in Indianapolis kept his name before the public. When he decided to make his political comeback bid in 2000, by running for the House seat that opened when Republican David McIntosh ran (unsuccessfully) for governor, Pence easily beat five opponents in the primary and then topped Democratic lawyer Bob Rock by 25,000 votes in the general election. He won by much more lopsided margins the next five times.

Pence’s additional ambitions, evident from the time he arrived at the Capitol, were initially fueled by his abilities formulating pithy sound bites and his facility with all forms of media. He was ahead of the curve in embracing a snazzy congressional website and communicating on social media. He even set up a small radio studio in his House office, although he couldn’t use it for a couple of months in 2001 after his suite was inexplicably contaminated during the anthrax-by-letter attacks targeting several senators.

In his third term, he was named chairman of the Republican Study Committee, which at the time was home base to 100 or so of the most conservative Republicans.

[ A Conservative Revolt in Full ]

His biggest setback came two years later, when he got trounced 168-27, challenging Ohio’s John A. Boehner for minority leader after the GOP lost control of the House in 2006. Pence had the backing of many conservative interest groups outside the Beltway (he was even named Human Events man of the year) but many colleagues groused that he’d gone too far in his criticisms of the GOP’s fondness for higher spending and parochial earmarking.

But just one election later, Pence secured Boehner’s backing and ended up unopposed for a two-year term as chairman of the House Republican Conference.

Of the current House GOP membership, 73 worked with Pence when he chaired the conference. And 60 more were freshmen during Pence’s final term, when he largely stepped away from the limelight while pondering a presidential run before deciding instead to run for governor. He won by 3 points against John Gregg, a veteran state legislator who is back as the Democratic nominee this year.