Out of Options, Obama Now a Bystander in Gun Debate

No indications president will take new action on his own; He will visit Orlando on Thursday, however

A member of the Orange County Medical Examiner’s Office wheels a body out of the Pulse nightclub in Orlando, Florida, where an ISIS-inspired gunman killed at least 49 people on Sunday. (Joe Raedle/Getty Images)

That means a president who has pushed hard for legislative overhauls of gun laws and even acted alone to implement restrictions is essentially leaving the matter to be decided in November. Out of room to maneuver, Obama appears unlikely to choose between new executive actions and what's best for his political party.

At first glance, the attack that left 50 people dead inside the Pulse, a popular gay nightclub, appeared to put Obama in a tough spot politically. But what came into focus Monday was that his inaction was more of a legal calculation than a political one.

The thinking in some circles was that if the president moved too aggressively in calling for new gun control measures or too swiftly in enacting additional executive actions, he could have undercut presumptive Democratic presidential nominee Hillary Clinton and his party’s chances of retaking control of the Senate.

But less than 48 hours after 29-year-old Omar Mateen carried out America’s worst mass shooting in history, Democratic candidates were meeting or outpacing Obama — who will visit Orlando on Thursday — in both rhetoric and actions.

Clinton used a series of television interviews and a campaign stop in Cleveland to call for an assault weapons ban. Democrats in the House and Senate readied gun-control proposals, sensing a chance to force Republican leaders into tough decisions as the country mourned.

Rather than suggesting Obama was studying potential executive actions, White House aides sought to put the onus for any Washington-based response to the Islamic State-inspired shooting squarely on congressional Republicans.

Congressional aides and sources within gun control groups who have worked with the administration before say they have heard nothing from the White House in the wake of the nightclub killings . And most expect the silence to continue.

“The president has done almost everything he can via executive orders on guns,” said one gun-control source with ties to the White House.

Several senior Democratic aides said the White House has not given any notification of coming executive actions or legislative proposals . Nor are those aides, all who have been involved in previous gun-control efforts, expecting such calls or emails.

When asked if the administration is considering new executive actions, several White House aides said they had nothing new to report.

Press Secretary Josh Earnest  told reporters Monday he is “not aware of any announcement” about new actions Obama might take without seeking lawmakers’ approval. And while he declined to rule it out, Earnest made it clear that the president wants Congress to act.

He said executive actions Obama took in January to tighten gun access laws were “substantial,” and seemed to indicate the president has gone about as far as he legally can.

[ In Wake of Orlando Shooting, Clinton Tacks to the Center on Terror ]

The January executive actions target the federal background check process, including the definition of who is a legitimate firearms dealer.

The action was tailored to "clarify that it doesn’t matter where you conduct your business — from a store, at gun shows, or over the Internet: If you’re in the business of selling firearms, you must get a license and conduct background checks," according to a White House fact sheet.

Previously, only gun dealers who were officially licensed were required to conduct background checks.

The White House now wants Congress to build on those moves.

“It’s time for them to step up to the plate and do their job,” Earnest said referring GOP members, adding that Obama is “quite frustrated” by congressional “inaction” on what the president often dubs common sense bills.

Earnest refused to completely close the door on executive actions, saying if a “good idea” comes across Obama ’s desk, “he’s not going to hesitate to act.” 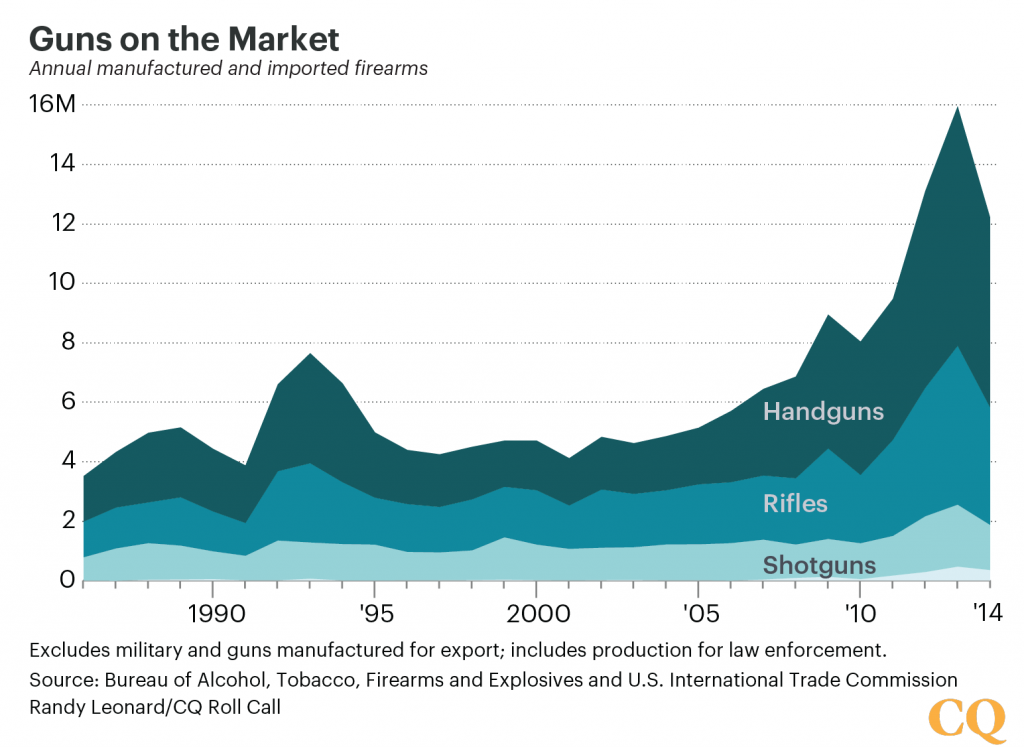 But it was clear Monday that the White House believes Obama has done just about all he can on his own. That’s a big reason why Earnest said the president will be a “forceful advocate” of a bill Senate Democrats are pushing that would prohibit suspected terrorists from acquiring firearms.

Obama’s best chance to get some kind of gun-themed legislation passed will come by helping Clinton win the White House and his party wrestle back control of the Senate, while also chipping away at the GOP’s House majority.

To that end, the White House on Monday renewed Obama's threat that he will not raise campaign funds for any Democratic incumbent or candidate who opposes, as Earnest put it, "commonsense" gun control legislation.

Obama’s chief spokesman also reiterated the administration’s belief that a majority of Americans want stricter gun laws. He issued a call for more Americans to let their members of Congress know that.

Clinton began making the case in Cleveland on Monday, saying “weapons of war have no place on our streets.” That was a reference to the AR-15 assault rifle Mateen purchased legally and used inside the club.

She said if the FBI is investigating an individual for suspected terrorist links, that person should not be able to purchase firearms “no questions asked.” Clinton also endorsed closing the so-called “gun-show loophole” and prohibiting anyone on the no-fly list from being able to buy guns.

But in a notable example of the politics of combating such “homegrown extremists,” Clinton first went through a hawkish and lengthy section of her speech focused on her plan for defeating ISIS.

Brad Bannon, a Democratic political strategist, suggested Obama, Clinton and Democratic candidates have an opportunity to “frame” the attack in terms they prefer.

“This seems like a classic moment in political communications where the issue is about to be framed,” Bannon said. “And the president has the opportunity, better than anyone thought [through] his bully pulpit, to frame it as a gun-control issue.”

Bannon called it wise for Clinton to talk at length about her counter-ISIS plan and her preferred gun-control policies because “Trump is already trying to frame this as terrorism — it’s right in his wheelhouse.” That’s because, Bannon said, “the polls indicate fairly clearly that she has a big lead when people are asked who is more qualified to be the next commander in chief.”