Net Worth of Leaders Held Stable During Tough 2015 Investment Year

Paul Ryan may have ascended to the House speakership in 2015, but closer to home, his personal net worth fell by $1 million.

The Wisconsin Republican, who just won the House Republican Conference backing for another term in the 115th Congress, reported a minimum net worth of just under $2 million according to his personal financial disclosure report.

It amounted to the biggest change among the top-ranking Republicans and Democrats in the House and Senate, according to Roll Call’s annual Wealth of Congress survey.

Since 1990, Roll Call has raked through congressional financial disclosure forms to discover scores of interesting facts that illustrate how lawmakers make their money, how they keep it and how some use the illusion of transparency to their advantage.

The lawmakers are required to break down their finances every year, and these reports are made publicly available by the House and Senate clerks. The forms are intended to present a full accounting of their finances and are instructive for showing how those entrusted with managing the nation’s affairs manage their own.

For the most part, the wealth of Senate Majority Leader Mitch McConnell, incoming Senate Minority Leader Charles E. Schumer, Ryan and House Minority Leader Nancy Pelosi remained relatively unchanged from 2014 to 2015. Half of Ryan’s net worth comes from the trust of Prudence Little, the late mother of his wife Janna.

It was not a banner year for investments. The S&P 500 and Dow Jones industrial average had their worst year since 2008 while bonds, cash and commodities offered few appealing alternatives. Most members of Congress hew to more traditional investment choices, though a few have made fortunes in unusual ways. California Republican Rep. Darrell Issa, the richest member in recent years, invested $7,000 in savings in a struggling Cleveland consumer electronics business in the early 1980s, turning it within a few years into the manufacturer of the enormously popular and profitable Viper car alarm.

For 2016, Roll Call examined the most recent disclosures of 27 power players in the 115th Congress, covering calendar year 2015. This group includes leadership, as well as expected chairmen and ranking members of influential committees.

But the calculations reveal one of the flaws of the financial disclosure process.

Take Rep. Adam Smith of Washington, the top Democrat on the House Armed Services Committee. Smith reports $199,000 in assets that is effectively offset by a $250,000 mortgage on his home. While mortgages are certainly liabilities, most would consider them a different kind of liability than a credit line. Additionally, the ranges for asset values widen with increasing value, so estimates invariably come in low for those worth millions.

The 27 leadership figures covered in this year’s survey had widely varying net worths. Pelosi topped the list with at least $28 million while House Majority Whip Steve Scalise, ranked last, with no assets and $375,000 in liabilities.

A number of top lawmakers derive much of their wealth through their spouses or other family members. Pelosi’s husband Paul is a venture capitalist with interests ranging from technology to real estate to professional sports. The mother of GOP Rep. Rodney Frelinghuysen, the incoming chairman of the House Appropriations Committee, was an heir to Procter & Gamble. The family of Senate Armed Services Chairman John McCain’s wife Cindy, owns a large beverage distributorship in Arizona. And the husband of Nita M. Lowey, ranking Democrat on House Appropriations, is a partner in a suburban New York law firm.

Perhaps more striking is how many congressional leaders report more in liabilities than assets. According to Census data from 2011, the most recent year available, 18.1 percent of households had a negative net worth. Among the leaders surveyed, seven of 27, or 26 percent, were in the red. An additional two, Sen. John Thune and House Minority Whip Steny H. Hoyer, are worth less than $100,000.

Hoyer lists only three assets to his name: a bank account with over $50,000 in it, and two investments worth less than $1,000 each.

While there is no single answer why these members are worth so little, one common thread is that many have spent much of their careers in public service, where it is harder to build a large net worth than a career in the private sector. For example, Scalise was a programmer before being elected to the Louisiana House at age 30. Sen. Patrick J. Leahy of Vermont, $350,000 in the red, has been in the Senate since age 34.

McConnell, whose book “The Long Game” detailed his humble beginnings growing up in the South, is now worth over $10 million. The Kentucky Republican lists, among his assets, multiple, million-dollar investments in indexes. Interestingly, most of his money is not under his name; $4 million is held jointly with his wife, former Secretary of Labor Elaine Chao, and nearly $6 million is held in her name alone.

His Democratic counterpart, Schumer, is worth $367,000. Much like Vice President Joseph R. Biden Jr., whose net worth was famously low due to his long career in politics, Schumer has never held a job outside of elected office. He began as a state assemblyman in 1975, just after graduating from law school, and then moved to the House in 1981 and the Senate in 1999.

Though they’re undeniably well off, the median net worth of the group is roughly in line with Congress as a whole; last year, the median was Sen. Bill Nelson, worth $440,000. Among the leadership group, it’s Sen. Patty Murray, who is worth $591,000. They’re still far outpacing the average American household, which according to most recent Census data had a net worth of $68,826 in 2011.

Although not included in our analysis, Rep. Tim Ryan, who is challenging Pelosi for the position of House minority leader, would fall at the lower end of the leaders group. He is worth $4,000, and has spent his entire career as a congressional aide or elected official. Close to half of his assets are royalties from his two books, “A Mindful Nation” and “The Real Food Revolution.” 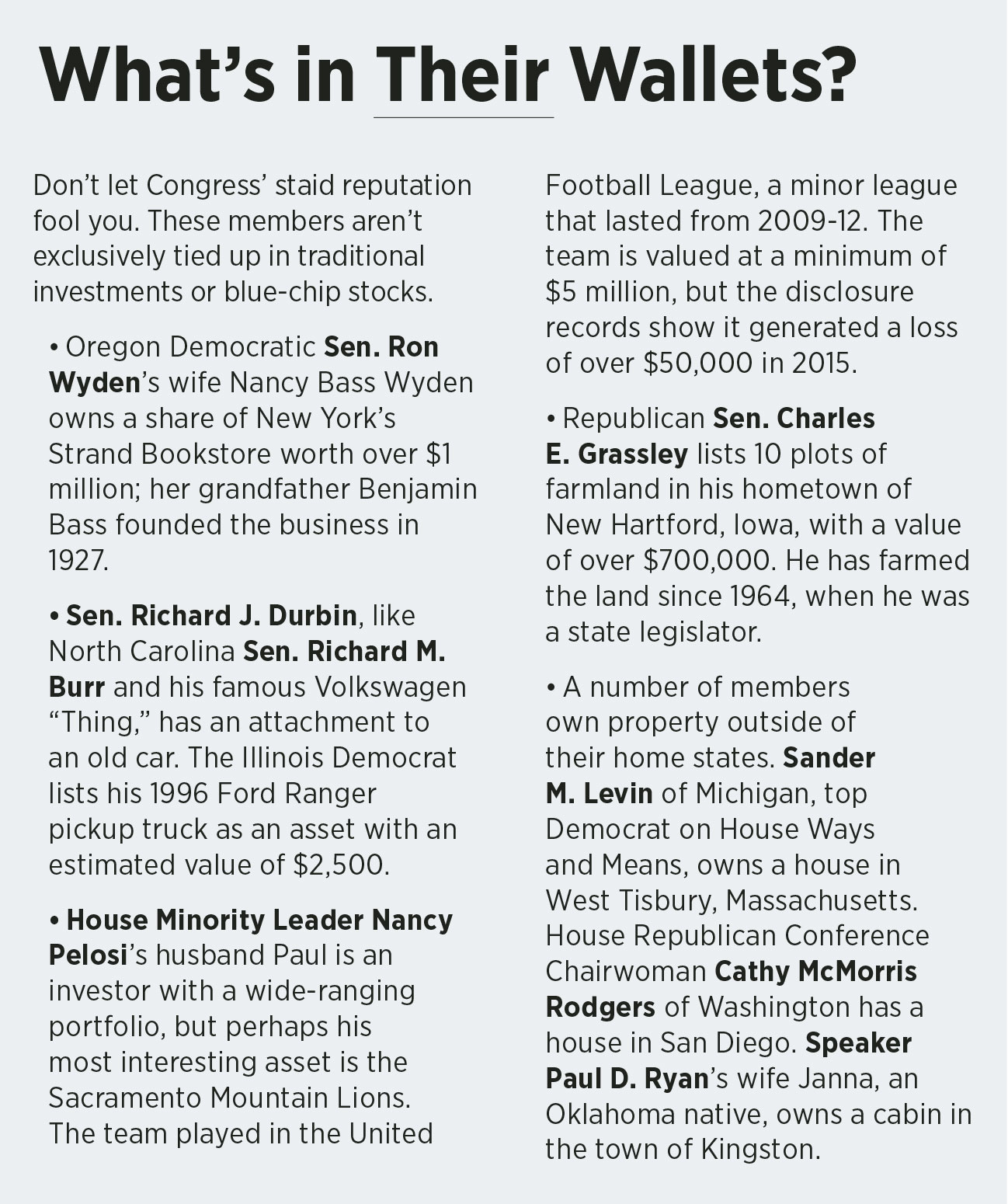