An election year filled with anti-K Street rhetoric hasn't stopped candidates up and down the ballot from pressuring prominent Washington lobbyists to pony up record sums of political cash.

Lobbyists may well give more in 2016 than they did in previous cycles. The 2014 Supreme Court ruling in McCutcheon v. Federal Election Commission did away with an aggregate limit on donations to candidates for federal office. And with control of the Senate in play, it's increasingly difficult for lobbyists from both parties to resist fundraising pleas.

New arrangements such as joint fundraising committees have also driven up the requests for money. And registered Democratic lobbyists, who for two presidential cycles were blocked by President Barack Obama from donating to his campaigns, have now been liberated. They have made Democratic front-runner Hillary Clinton the top recipient of K Street cash among White House hopefuls this election cycle. The Democratic National Committee is also once more welcoming lobbyist checks.

“I liked it better under Obama’s regulations,” joked Democratic lobbyist Tony Podesta of the Podesta Group. “I would’ve had $36,000 more money if Obama had run for a third term.”

Donald Trump, the Republican Party's presumptive White House nominee, does not discourage lobbyist donations, but his unconventional candidacy has not drawn a big response from K Street, according to federal election data. The emergence of joint fundraising committees merging Trump's effort with those of the Republican National Committee and state Republican parties has yet to foster more back-and-forth between the lobbyists and Team Trump.

“I haven’t gotten any call,” said Ken Kies, a tax lobbyist with the Federal Policy Group. “I think they’re looking for big money.”

The top 20 givers among registered federal lobbyists, as identified by the nonpartisan Center for Responsive Politics, have collectively donated more than $2.5 million. But they're quick to note that their giving is a pittance compared to high rollers that have given millions of dollars, mostly to super PACs.

GOP lobbyist Pat Raffaniello, who runs Raffaniello & Associates, said that when it comes to presidential fundraising, it’s hard to get a candidate’s attention without bundling together big money from other donors.

“Unless you are raising hundreds of thousands of dollars, it seems like a wasted effort from a lobbying point of view,” Raffaniello said. “You don’t get on anybody’s radar screen.” 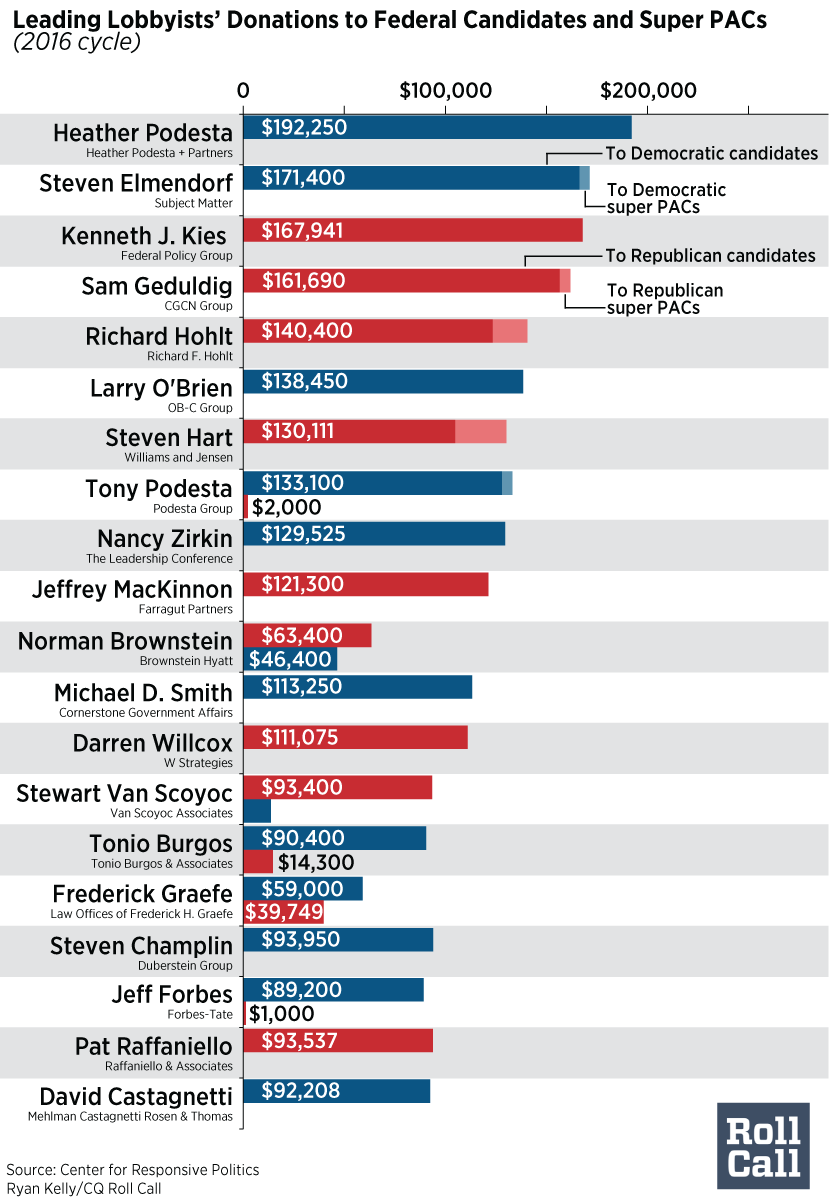 K Street’s top donors are mostly white males, and lobbyist Heather Podesta said she urges more women to get involved, even in low-dollar events or volunteering to work phone banks for candidates.

Fellow Democrat Nancy Zirkin of the Leadership Conference on Civil and Human Rights got Podesta started in fundraising back in 2004 when John Kerry was the Democratic nominee. Zirkin, Podesta said, first assigned her to raise $10,000.

“I started asking everybody,” said Podesta, who was previously married to Tony Podesta. She eventually helped raise nearly $500,000.

Campaign finance experts say the direct donations from lobbyists to lawmakers and congressional candidates have special value, even if they're comparatively low.

“Lobbyists don’t have the big checks, but lobbyists’ money, because it’s going directly to the campaigns, is pure gold,” said Nick Penniman, executive director of Issue One, a group that advocates campaign finance reform. “It’s the highest currency in political giving.”

Some of the top lobbyist donors give exclusively to one party, but others, such as Fred Graefe, distribute dollars to both sides of the aisle. Graefe, a health care lobbyist, donates to members on the committees his clients deal with the most, such as the tax-writing Senate Finance and House Ways and Means committees, as well as to leadership.

“People in the heartland believe that everybody’s terrible here,” Graefe said. “But I work hard, members and their staff work very hard, and so I support my friends.”

Daniel Auble, senior researcher with the Center for Responsive Politics, said such bipartisanship in giving is unique to K Street donors. “One thing we see with lobbyists much more than the general population is people giving to both parties,” Auble said. “That lends some credence to the idea that some of these contributions are more transactions or practical than ideological.”

Such giving, Penniman said, is the type that has fueled voters’ frustration and has led to much of the campaign-trail rhetoric demanding a revamped political financing system. If elected officials fail to channel that anger and anxiety by pushing for new political money laws, the public will end up more cynical than ever, Penniman said.

Even some lobbyists said they’d like to see the campaign finance system overhauled — and not necessarily just to preserve their own bank accounts.

“I don’t think the process is dirty,” said Democratic lobbyist Steve Elmendorf. “But elected officials spend too much time raising money, and their time would be better spent focusing on policy.”