100 Years on the Front Lines of History

If the filmmaker putting the finishing touches on a biopic about former Sen. Harris L. Wofford had waited for the lifelong activist to hang it up before rolling tape, the forthcoming documentary might never have gotten made.

The Pennsylvania Democrat, who is poised to join the nonagenarian set in a few weeks (April 9, to be exact), shows no signs of slowing down, doggedly championing progressive policies — like he did in 1936 while distributing campaign materials for President Franklin D. Roosevelt’s first re-election push — same as he has for going on a century.

“So it’s been a very long road that I’m enjoying,” he said of a personal drive that’s kept him on the front lines of modern history.

In It to Win It According to Jacob Finkel, director of the aforementioned film and founder of the Corporation for Civic Documentaries , shining a light on Wofford’s far-reaching career — from helping shape the course of the Civil Rights movement to ongoing efforts to bolster volunteerism — seemed like a civic duty itself.

“I want more people to know about the unheralded impact Harris Wofford has had… It’s a story more people in this country should be aware of,” Finkel said of the feature-length flick he hopes to unveil in the coming months.

Wofford’s time on Capitol Hill may have been brief, but he said he tried to make the most of it.

Originally appointed by Pennsylvania Gov. Bob Casey in early 1991 to fill the vacancy left by the death of Sen. John Heinz, R-Pa., Wofford that fall mounted a campaign to formally serve out the rest of Heinz’s third term. 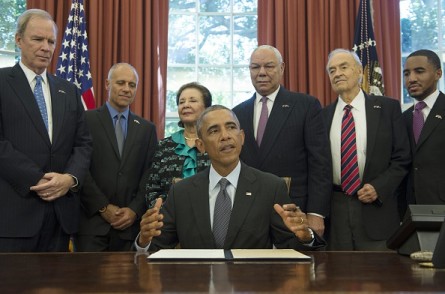 As chronicled in “The Road to Nowhere: The Genesis of President Clinton’s Plan for Health Security,” a pair of Democratic strategists — namely James Carville and Paul Begala — hatched a risky plan to propel their guy past GOP front-runner Richard Thornburgh: Promise the public universal health care.

Wofford scored a come-from-behind victory and poured himself into fulfilling the lofty goal.

Senate Republicans, he soon discovered, had no such interest in the goal.

“Health care was a total fiasco and a complete failure,” Wofford conceded.

Wofford did manage to move other priorities through the closely divided 102nd Congress, but was still swept out of office in November 1994 by conservative firebrand Rep. Rick Santorum, R-Pa.

“It made King’s birthday a day on, instead of a day off,” Lewis said of the collaboration.