How Republicans Held the Senate

GOP prepared diligently for Trump, but he turned out to be a much different candidate than expected

Republican and Democratic strategists alike felt the shock set in when they saw the Dane County returns in Wisconsin, the early vote tallies in rural Florida, and the struggles of a Democratic gubernatorial candidate in Indiana who was supposed to run well ahead of the party’s candidate for Senate, Evan Bayh.

The unthinkable was happening: Donald Trump was going to win the presidential race. And with it, he was smashing a year’s worth of strategy in a dozen competitive Senate races.

The outcome was an unalloyed good for the GOP, which lost just two seats in a year its ranks could have shrunk by as many as seven members.

But the reasons behind its success were wholly unexpected: Instead of being a drag, Trump’s surprising strength proved crucial in a handful of key races where Republican candidates won narrow victories.

In Missouri, for instance, Sen. Roy Blunt won his battleground race in large part because Trump carried the state by 19 points — 16 points more than the senator’s 3-point margin of victory.

It’s hard to overstate how much Trump’s victory caught people off guard. In interviews with a dozen top Senate strategists from both parties before Election Day, not a single one expected him to win. (Many thought he would lose even worse than the polls suggested.) His looming defeat was the single biggest reason that to most of them, Democrats had a good chance of taking the majority.

It’s why Republicans conceived of and executed a detailed plan to distance themselves from Trump, one they thought they were pulling off remarkably well even if their majority was imperiled.

In the end, they didn’t need it.

“This is a race the political elite in Washington totally missed because they haven’t spent enough time in towns with rusty former factories, and they didn’t properly calibrate how bad a candidate Hillary was,” said Brad Todd, a GOP strategist.

Now, these same officials are trying to comprehend how they misjudged the race so badly.

“No one understands what happened,” said one senior Democratic strategist. “Everything was wrong — the polling, the modeling, the targeting — everything. Now we try to figure out a way forward.”

The degree to which this election confounded expectations is evident in a comparison of two GOP candidates: Sen. Patrick J. Toomey of Pennsylvania and Sen. Richard M. Burr of North Carolina.

GOP officials thought Toomey was running the best campaign of the year (with the exception of Republican Sen. Rob Portman), a campaign complete with a hard-working incumbent, fully developed ground game, and smart strategy for dealing with Trump’s presence. (Toomey didn’t announce he supported the GOP nominee until Tuesday evening, concerned that his support would have alienated key moderate voters in the traditionally blue state.)

But Burr drove Republicans to the point of rage. The two-term incumbent took such a hands-off approach to his race that the National Republican Senatorial Committee this summer forced him to take on a communications director, whose salary it paid with money out of the coordinated campaign. Burr’s de-facto digital director, an NRSC staffer, wasn’t technically on Burr’s campaign at all.

The Republican’s campaign conducted only two polls the entire election cycle, one in May and another in late September, according to five people with knowledge of the situation.

The final straw, according to three people, was Burr’s decision to attend an NRSC retreat in Sea Island, Georgia, for three days in mid-September, where the senator played golf a month and a half before Election Day. Burr was the only Senate Republican at the gathering who was running in a competitive race.

(A source inside Burr’s campaign couldn’t confirm details of Burr’s whereabouts in September, saying they usually don’t know what Burr is doing during the campaign.)

And yet, when it was all said and done, Toomey over-performed Trump by less than one point in Pennsylvania.

Burr’s margin? Two points. (Republicans do say that Burr’s opponent, former state lawmaker Deborah Ross, was an especially weak candidate because of her past work for the American Civil Liberties Union.)

Regardless, Trump boosted both candidates: The GOP nominee won Pennsylvania by a point, and North Carolina by 4 points. He wasn’t expected to win either state.

Where Trump didn’t win, GOP candidates struggled. Sens. Mark S. Kirk in Illinois and Kelly Ayotte in New Hampshire, and Rep. Joe Heck in Nevada, all lost their races. (Hillary Clinton is considered likely to win New Hampshire though the race has not been called as of press time.) 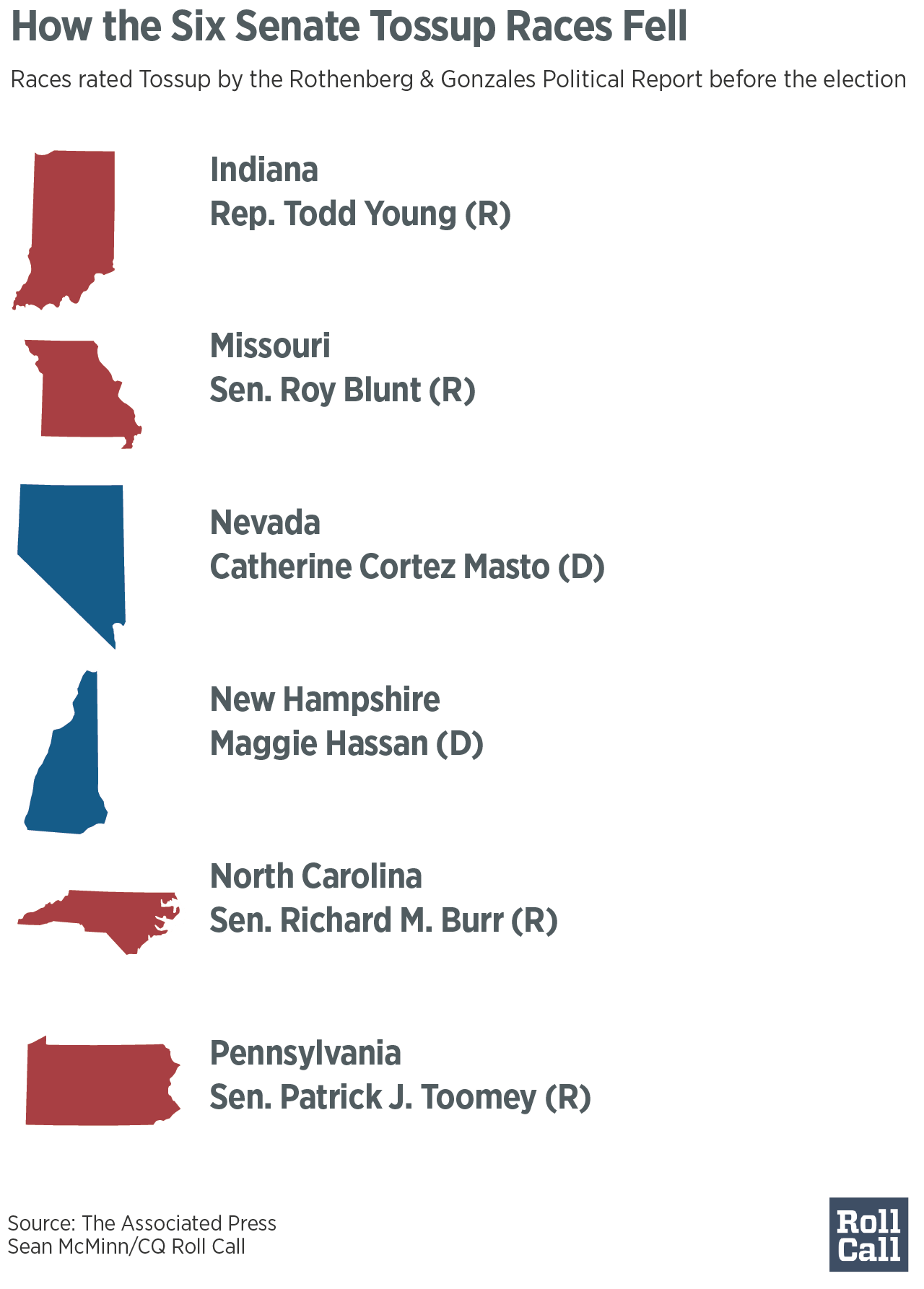 All three also publicly declared that they did not support Trump’s presidential bid. Strategists came to see this tack as a mistake, especially for Ayotte, whose numbers took a dive after withdrawing her support from Trump in October, according to operatives in both parties.

In what was a pivotal moment of the campaign, one GOP strategist said other senators were also “very close” to abandoning Trump en masse after the revelation of the “Access Hollywood” video, in which he bragged about touching woman on their genitals. They didn’t, the strategists said, when Trump performed well enough during the second debate to stabilize his support.

Leading Republican strategists didn’t expect much of any kind of help from the New York billionaire.

It’s why as early as last fall, their Senate candidates began preparing to run separate races from Trump. Such a step was unusual, especially that early, but it’s one NRSC Executive Director Ward Baker said he deemed necessary because he believed Trump would be the nominee.

“We were doing that … every single week, if not every day,” Baker said in an interview before Election Day. “Look, it hasn’t been easy, but we’re prepared so much, that’s why we’re holding on.”

Their concern proved prescient on some measures: The president-elect’s campaign didn’t build much of a ground game, and a persistent lack of TV ads in battleground states stirred worry that the party’s image was taking a beating.

Despite Trump’s many rhetorical provocations, operatives in both parties agreed that the most competitive Senate races were remarkably stable through the late summer and early fall. Even after the Democratic National Convention or the first presidential debate, when Trump’s numbers dipped considerably in public polling, numbers for GOP or Democratic candidates would barely budge.

It was then that, even if the operatives didn’t know it, they were witnessing Trump’s remarkable, if undetected, political resiliency.

“The worry was that the bottom would fall out at some point,” said Carl Forti, political director for the Senate Leadership Fund, a super PAC designed to boost GOP Senate candidates. But he said even when he expected the numbers to keep dropping, Trump held firm in at least the mid-to-high 30s.

“So could it get any worse?” Forti asked. “When you actually looked at the polling numbers, the answer was probably not. … His base wasn’t going anywhere.”

A top Senate Democratic strategist, interviewed before the election, marveled at Trump’s ability to bounce back, no matter the controversy he incited.

“It was every time he would do that, he would end up recovering in the polls,” the strategist said. “Overall, that was kind of an unexpected and very different outcome than anybody anticipated.”

She added: “He was a different kind of Republican candidate.”