Ellmers is now the first GOP member of the year to lose. She faced not only a redistricting challenge but also an onslaught of opposition from outside groups.

North Carolina's General Assembly did away with the 40 percent threshold requirement when it moved its House primaries from March to June.

But after court-mandated redistricting moved the 13th District across the state, Holding decided to run in the new 2nd District instead.

He represents more of the new district than Ellmers does, but he currently lives in the 4th District, which is represented by Democrat David Price. 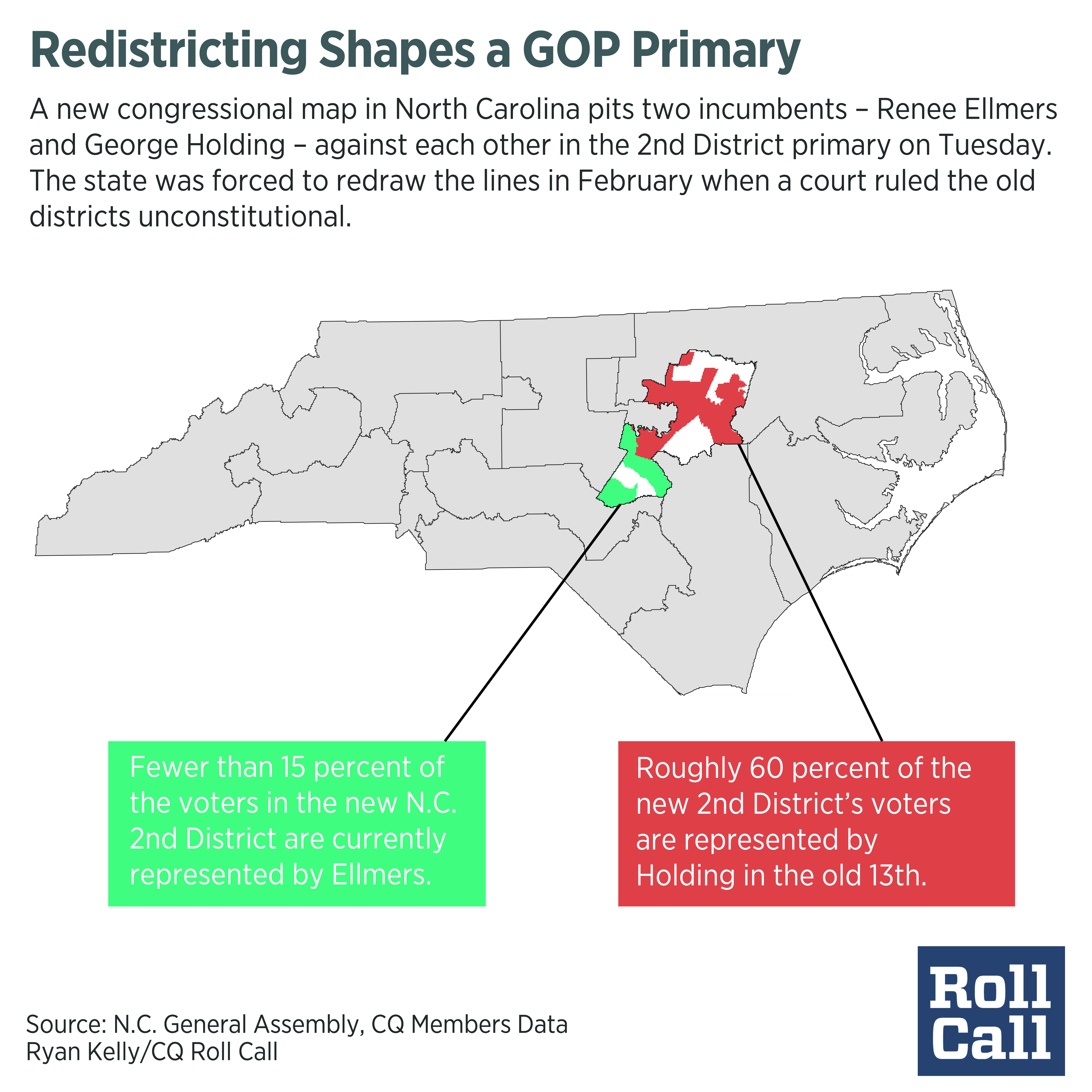 As the son of a wealthy banking family, Holding, the 99th wealthiest member of Congress , had more resources at his disposal. He also has a Super PAC on his side spending against Ellmers, who was backed by Defending Main Street Super PAC.

Ellmers attacked Holding for spending too lavishly on congressional trips.

But the attacks on Ellmers for alienating her conservative base have been non-stop. Outside conservative groups have piled on her for legislative actions she’s taken on spending, immigration and abortion.

Americans for Prosperity, a group backed by the Koch brothers, has spent big against her — the first time the group has targeted a GOP member in a primary.

Susan B. Anthony List, which is dedicated to backing GOP women who oppose abortion, took the unprecedented step of supporting Holding over Ellmers, who also opposes abortion.

Even a late-in-the-game endorsement from the presumptive GOP nominee couldn’t boost Ellmers, who had been facing a difficult primary before redistricting pitted her and Holding against each other.

Elected in 2010 with tea party support, Ellmers, a nurse, has since angered conservatives and outside groups, like the Club for Growth, which endorsed one of her challengers in the old 2nd District.

In its endorsement of Holding earlier this week, Tea Party Patriots Citizens Fund said Ellmers “was seduced by Washington once she got to the nation’s capital.”

[ The Rise and (Probable Fall) of Renee Ellmers ]

In particular, she’s taken heat for backing reauthorization of the Export-Import Bank. She’s argued  the export credit agency supports jobs in her district.

She also sided with 75 other Republicans in passing a Homeland Security spending bill that did not address President Barack Obama's executive order on deferred deportations.

Ellmers angered anti-abortion activists when she helped pull from the floor a bill that would have originally required rape survivors to report the crime  to the police in order to get an abortion more than 20 weeks into a pregnancy.

“If you remember back to the 2012 election, this is the conversation that started the whole 'war on women' issue with 'legitimate rape,” Ellmers told Roll Call in March when explaining her actions. She supported the revised bill.

Ellmers rose quickly through the ranks in leadership as an outspoken critic of the Affordable Care Act, chairing the Small Business Subcommittee on Healthcare and Technology as a freshman and working on the Republican Study Committee's replacement bill in 2013.

Holding will face an easy election in November in a district the Rothenberg & Gonzales Political Report/Roll Call rates Safe Republican.