Senate Majority Leader Mitch McConnell Wednesday said there were not 50 votes in the Senate for a health care bill. And that was before the CBO score came in. (Bill Clark/CQ Roll Call File Photo)

BY KERRY YOUNG AND SANDHYA RAMAN

A House-passed health care bill would reduce federal spending by $119 billion over a decade, compared to a previous estimate of $150 billion over a decade. And it would cause the number of Americans lacking medical insurance to rise by 23 million by 2026, which is 1 million less than under previous iterations of the measure, the Congressional Budget Office said Wednesday.

CBO released its new estimate of the bill that Republicans intend to use as a base for the first major health care legislation of the Trump administration. This marks the third time that the fiscal scorekeeper has had to review this bill, which GOP leaders struggled to move through the House. The previous estimate was released March 23.

Republicans added amendments during the May 4 debate, and the CBO found their inclusion did result in some modest improvements in the number of people who would lose coverage, as compared to the previous bill. The previous version of the bill was estimated to have caused about 2 million more people to become uninsured in 2020. “Those changes are primarily attributable to lower premiums,” the analysis said. By 2020, 19 million more people would be uninsured as compared to current law.

The effects of the bill would be immediate. In 2018, 14 million more people would be uninsured if the bill became law. Premiums would rise by an average of about 20 percent in 2018, CBO said. However, average premiums starting in 2020 would partially depend on changes states might seek to Obamacare insurance requirements. 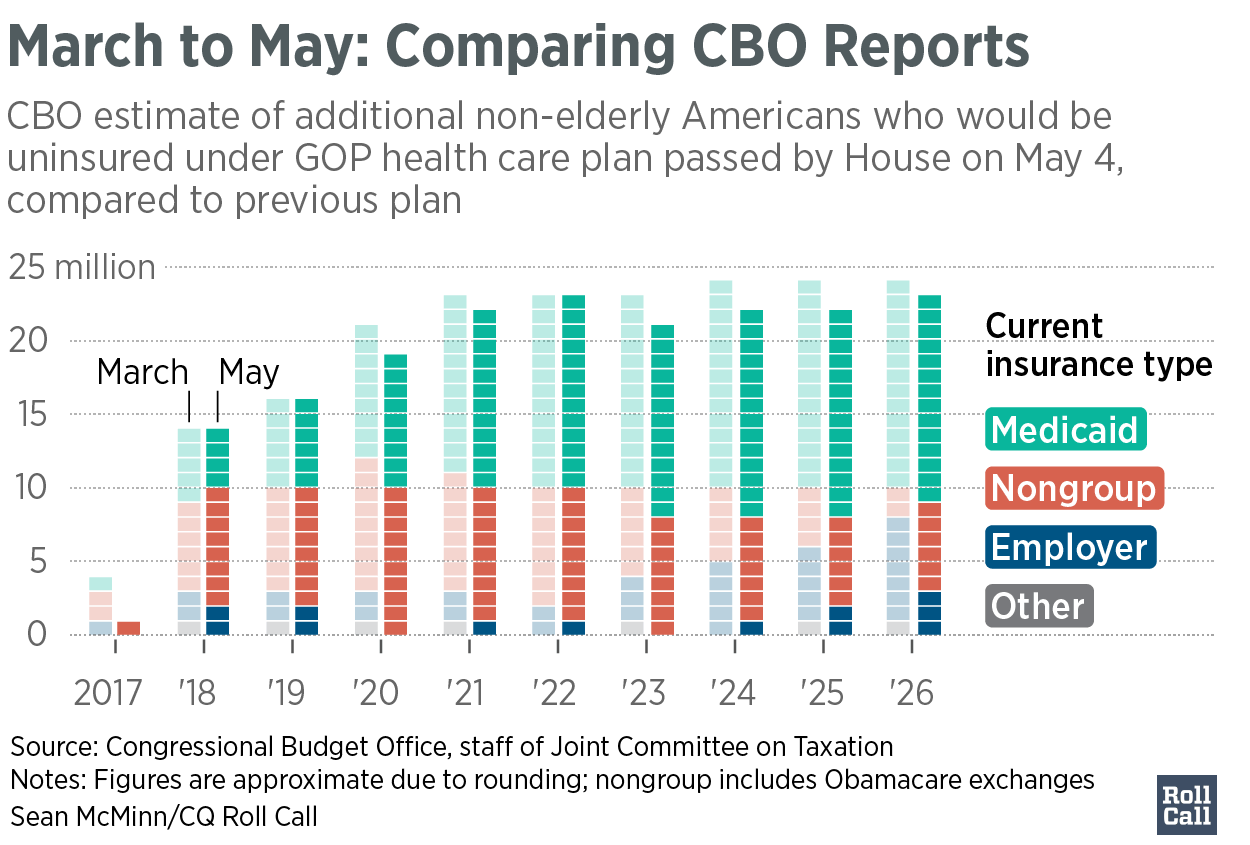 Overall, the program that would face the biggest long-term impact under the bill is Medicaid, the federal-state program for the poor, which would face a $834 billion cut in spending growth over the decade.

In total, the number of Americans lacking health insurance in the United States could hit 51 million by 2026 under the GOP law, compared with an estimated 28 million under current law. The previous version of the GOP health bill would have raised the number of uninsured to 52 million.

The GOP health bill also could lead “a few million” to purchase insurance policies that would not cover major medical risks, the CBO said.

In assessing the effects of the House-passed bill, CBO predicted scenarios in which people in ill health would struggle to obtain insurance, while healthier ones would find it easier.

About one-sixth of the United States population, for example, resides in states that would obtain waivers to let them change requirements on health benefits and ratings used to set premiums, CBO said. Average premiums would drop compared to current law because a “younger and healthier population would be purchasing the insurance.” People with medical conditions would face “extremely high premiums,” despite the additional funding added to the measure to help them obtain coverage under the GOP bill, CBO said.

“Over time, it would become more difficult for less healthy people (including people with preexisting medical conditions) in those states to purchase insurance because their premiums would continue to increase rapidly,” CBO said.

People living in states that narrow the scope of so-called essential health benefits might experience “substantial increases in out-of-pocket spending” for certain services or opt to skip them, CBO said.

Republican senators have been waiting to see the latest estimate on the costs and effects of their House colleagues’ health care bill, even though they plan to write their own version of the measure. The House bill will serve as a “foundation” for the Senate measure, with some of the same themes incorporated, said Sen. John Thune of South Dakota, the third-ranked Senate Republican. The chamber’s No. 2 Republican also expects to reincorporate much of the House measure in the Senate’s bill.

“The practical matter is that 80 percent of what the House did we’re likely to do, but you know the first thing we have to do is hit 50 senators and the VP and then we can work out those differences,” Senate Majority Whip John Cornyn of Texas said Wednesday. Republicans have opted to try to move their bill under special budget rules and intend to pass it in the Senate with only GOP votes. At least a simple majority will be required.

Before the release of the new CBO score, Cornyn said GOP efforts to revise the 2010 health law should try to bring down costs for consumers.

“The most important part about this to me is to make it more affordable and that’s where we need to focus our goal,” he told reporters. “That’s where we can help people who want to buy health insurance.”

Cornyn said he expected his Senate colleagues to begin to piece together legislative proposals soon. “We’re going have to start putting things on paper because we need to get it voted on,” he told reporters.

Separately, Senate Majority Leader Mitch McConnell, R-Ky., spoke to Reuters ahead of the release of the CBO score about the challenges in moving a health bill through his chamber.

McConnell has made this legislation a top priority for his conference, with the topic dominating its gatherings.

Sen. Roger Wicker, R-Miss., on Tuesday referred to the latest meeting as “part of our continuing three-day-per-week, hour-and-a-half focus group” of 52 GOP senators working on the health bill.

GOP leaders have delayed sending the health bill to the Senate until the new estimate was released, which last week sparked concern about what the estimate could say. Republicans need to keep the bill within the dictates of the budget reconciliation process to move the bill with a simple majority in the Senate.

The fiscal 2017 budget resolution calls for proposals for at least $2 billion in savings from each chamber, with that target split in the House between the Ways and Means and the Energy and Commerce committees. In the Senate, this work falls to the Finance and the Health, Education, Labor and Pensions committees.

Thune, who serves on Finance, said Republicans in his chamber may look to keep in place the House’s approach to the Medicaid program. The House bill intends to end the current open-ended federal commitment, and move to a system based on per-capita caps or block grants. It also calls for allowing states more flexibility in managing these programs. The House bill would halt higher federal payments for the Medicaid expansion created by the 2010 health law by 2020.

The House bill’s changes to Medicaid lost the support of moderate Republicans in that chamber, and may prove a tough issue in the Senate.

“We’ll probably have a slightly different glide path for expansion states for a phaseout, “ Thune said.