Boots on the ground or paid vacation?

Staff travel makes up a significant chuck of the amounts spent on travel by the Appropriations and Budget committees. (Bill Clark/CQ Roll Call file photo)

Members of the Budget and Appropriations committees have spent about $2 million on foreign travel since the start of 2016, including trips to Argentina, Tanzania, Italy and the United Kingdom, according to an analysis of congressional records. 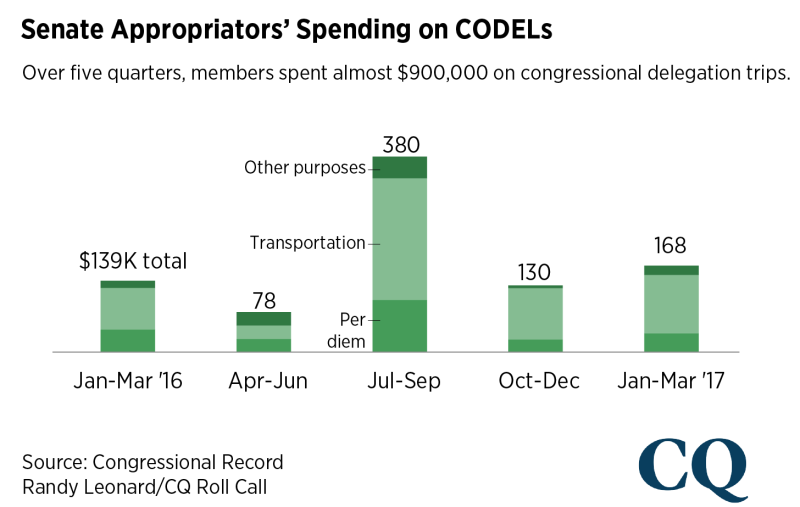 Staff travel is a significant chunk of the total committee travel amount, with key aides often traveling abroad — sometimes with congressional delegations, or CODELs, and sometimes independently of lawmakers.

The trips are part of the unlimited pot of money that Congress can tap for foreign travel, which is arranged by the State Department and paid for by the Treasury Department.

“Official travel helps the Committee and the Congress identify areas of need or waste, prioritize future projects, and provides critical information necessary to make the best possible funding decisions and the most out of every dollar,” Jennifer Hing, House Appropriations Committee spokeswoman, said in a statement. “Putting boots on the ground is often the only way to gain this important perspective.” 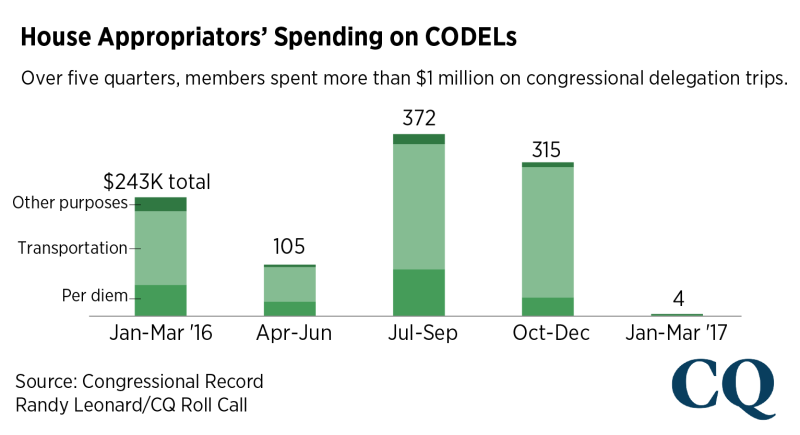 Stephen Worley, spokesman for the Senate Appropriations Committee, had a similar answer, saying in a statement: “The firsthand knowledge of on-the-ground realities helps inform the Committee’s work as it drafts legislation funding federal programs.”

The analysis focused on foreign travel by the Budget and Appropriations committees because they are the two key fiscal panels in Congress. Their members set the toplines for discretionary spending and divvy up funding for each of the 12 individual spending bills, wielding enormous influence.

The most-traveled member of either committee during the five-quarter time frame is Rep. Henry Cuellar, D-Texas, who visited 16 countries. He is a member of the Defense and Homeland Security subcommittees.

He’s followed by Rep. Steve Womack, R-Ark., who visited 11; he sits on the Defense, Labor-HHS-Education and Military Construction-VA subcommittees.  Next was Senate Appropriations Chairman Thad Cochran, R-Miss., who traveled to 10. He also chairs the Defense Subcommittee and sits on the Agriculture, Energy-Water, Homeland Security, Interior-Environment and Labor-HHS-Education subcommittees.

The countries visited range from ideal vacation locations to active war zones, and from nations that strongly align with U.S. foreign interests to those that are unlikely to roll out the red carpet for members of Congress.

In July 2016, Frelinghuysen traveled to Afghanistan, Iraq, Kuwait and Qatar on a six-day trip that cost $11,686.

During the first quarter of that year, Enzi traveled to Australia, Singapore, Tanzania, Rwanda, Ethiopia and Spain. He used the Department of Defense for transportation and his per diem totaled $2,389, but the total cost is unclear because DOD does not have to disclose travel costs.

Enzi’s trip was organized by Sen. James M. Inhofe, R-Okla., and was designed so lawmakers could visit the U.S. Pacific Command, U.S. Africa Command and U.S. European Command. During those visits, Enzi and others met with military members, ambassadors and embassy staff.

“The focus of the meetings were on national security, counter terrorism, ongoing contingency operations, bilateral and multilateral cooperation, trade, commerce and infrastructure,” Max D’Onofrio, Enzi’s spokesman, said in a statement.

But it’s not just lawmakers who take foreign trips. Staff have accompanied lawmakers on many of their trips and often take delegation trips without members.

For example, four House Appropriations staffers took a 10-day trip to Australia, New Zealand and Antarctica from Jan. 30, 2016 through Feb. 8, 2016. The total cost of the trip — which was taken by then-Staff Director Will Smith, Deputy Staff Director Jim Kulikowski, staff member Leslie Albright and staff Member B.G. Wright — was more than $56,000.

Meredith McGehee, chief of policy, programs and strategy at Issue One, a nonpartisan group that says it  is “dedicated to political reform and government ethics in order to strengthen democracy and return government to the American people,” said that staff travel can be “much better and more productive” than member travel.

The most popular time for staff or members to travel abroad is the third quarter of each year, which is also when Congress breaks for the August recess.

The Appropriations Committee does not set a limit on the number of trips that members and staff can take.

In order to travel abroad, a committee member must get the permission of the chairman and the State Department. The trip is then financed by the Treasury Department with a fund that does not have an annual limit set through the appropriations process.

The process is similar to that of other House panels.

The trips are disclosed in the Congressional Record about two months after the quarter ends. The forms list the dates, countries and amount of money spent on per diem, other purposes and transportation, unless the travel is through the Department of Defense.

Lawmakers and staff are not required to explain why they took the trips, with whom they met, or how the foreign travel relates to their committee assignments.

The amount of money Congress spends annually on travel outside of the country has steadily increased in recent years.  During 2015, lawmakers and staff spent about $11 million and that number increased to $19.4 million during 2016, according to Holman and a recent report in USA Today.

But the Treasury Department’s reported numbers differ – sometimes by quite a bit – from the detail in the congressional reports. That is one of the reasons Holman wants the reports to become more detailed and easier to access.

“Even though official travel may not be a source of corruption, it can be an abuse to tax dollars,” he said.

McGehee said she supports lawmakers traveling abroad, because that allows them to better understand the implications of policies they’ve implemented. “If you are going to make policy that affects the world, which is what we do here in America, you need to have first-hand experience,” McGehee said.

But she says members need to provide more information when returning from those trips, so that taxpayers know they were traveling abroad to work, not play.

“If it’s going to be on the taxpayer dollar, it should be a trip that has a fairly robust policy agenda and you only know that if the agenda is disclosed,” McGehee said, noting that the schedule could be released after the trip is over to avoid any security concerns. “Is it truly a working trip, or is the travel being used as a pretext for vacation?” 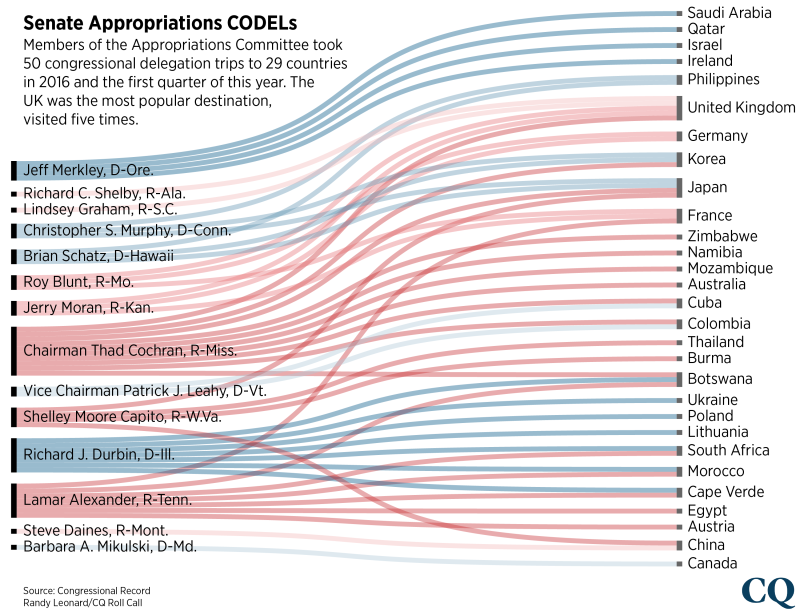 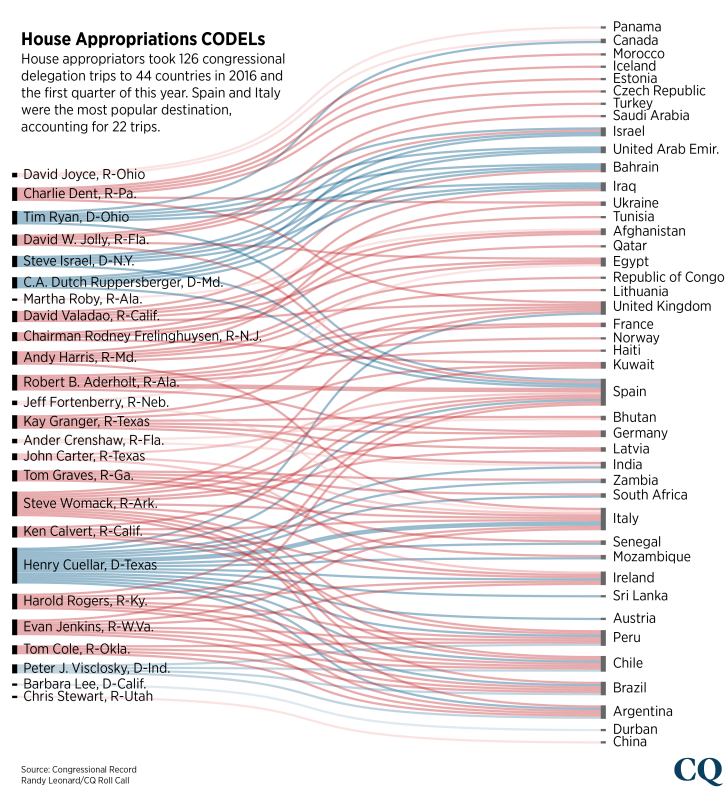