Absences Pile Up for Some House Members Seeking Other Offices

But others manage perfect voting records in September

As Labor Day comes and goes, it can be hard for candidates to peel away from the campaign trail to get back to their day jobs — even if that involves voting as a member of Congress.

House members running for a different office, most of whom are seeking promotions to the Senate, have missed about 10 percent more roll call votes this month through Sept. 22 than their colleagues seeking re-election, according to a Roll Call analysis. The lawmakers include a few contenders in high-profile races who have missed a substantial number of votes this month.

California Rep. Loretta Sanchez missed the most votes of any House member running for a different office, showing up for only 22 of 63 roll calls. She is running for the seat of retiring Democratic Sen. Barbara Boxer against the state's Attorney General Kamala Harris, in an all-Democratic contest.

Sanchez’s campaign did not respond to a request for comment last week. But, she’s not alone in piling up absences.

Seven House members running for other office, including Sanchez, voted in fewer than 96 percent of roll calls so far this month, which is the average for the chamber. That list includes four Democrats (Reps. John Carney of Delaware, Ann Kirkpatrick of Arizona, Tammy Duckworth of Illinois and Sanchez) and three Republicans (Reps. Todd Young of Indiana, Candice S. Miller of Michigan and Charles Boustany Jr. of Louisiana).

“Ann has been hard at work, which is why the House passed her bipartisan legislation to protect [Veterans Affairs] whistleblowers and hold the VA accountable just last week,” Kirkpatrick spokesman D.B. Mitchell said, when asked about the voting record. “And it’s no secret Ann logs thousands of miles traveling across Arizona to listen to and share the concerns of families who want better paying jobs, stronger schools and comprehensive immigration reform after John McCain's 33 years in Washington.”

Kirkpatrick is challenging McCain, a five-term GOP senator, in November. 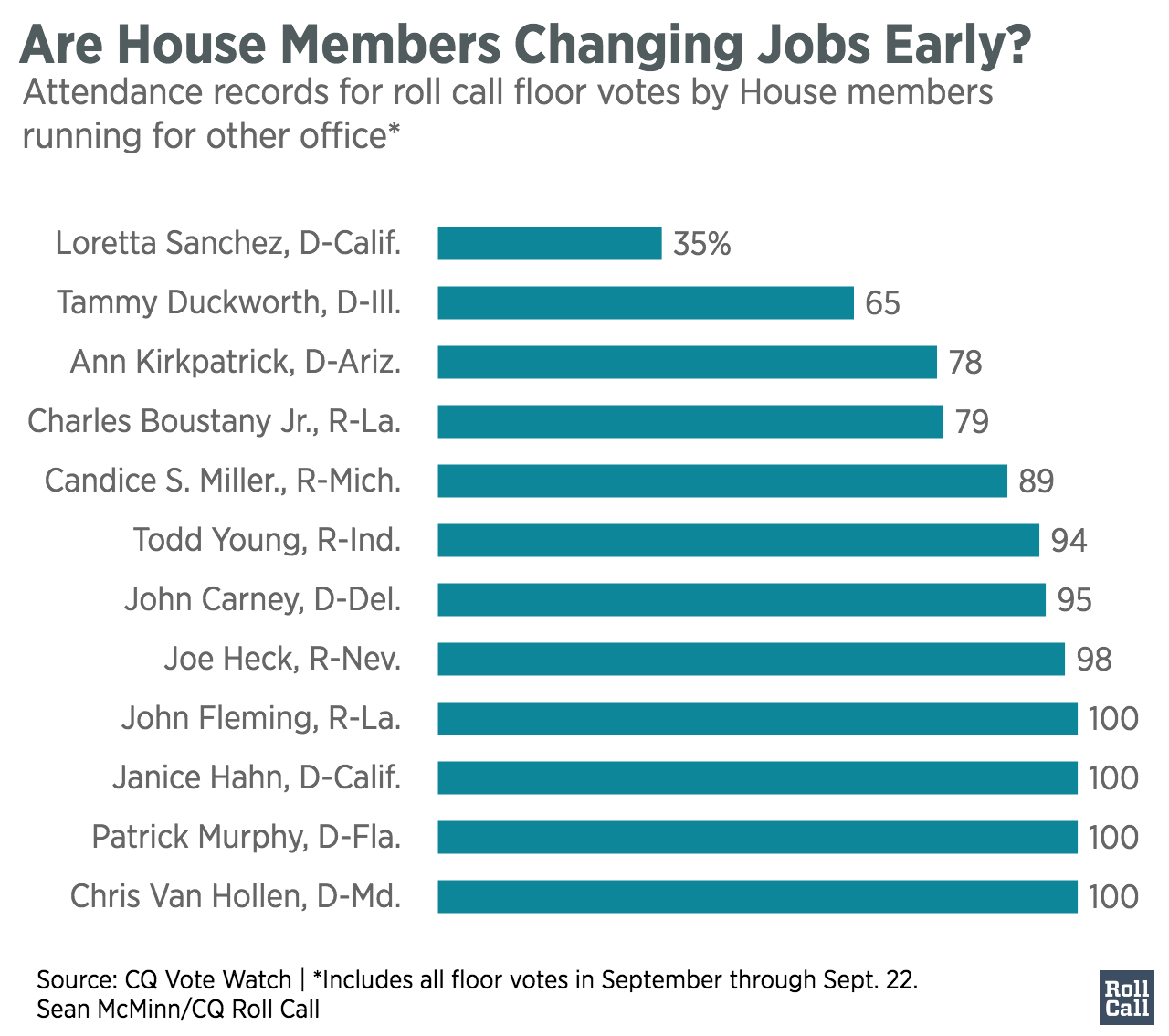 Many of the missed votes have been on generally noncontroversial suspension bills, which can move through an expedited process and require a two-thirds majority to pass. It doesn’t mean they are all insignificant, but generally a handful of absences will not affect the outcome.

“When there are votes in Congress to actually get something done, I’d be more than happy to go and vote. Unfortunately, … as you’ll see, we’re not doing much in Washington in terms of getting the job done,” Duckworth told CBS' Chicago affiliate WBBM-TV, earlier in September.

Four of the 12 House members running for another office showed up to all their votes this month. That group includes Florida Democratic Rep. Patrick Murphy, who has made the low Senate attendance record of GOP incumbent Marco Rubio during his unsuccessful run for president, a key issue in the Senate race in the Sunshine State.

McCain is also on the perfect attendance list. He missed many Senate votes during his two previous presidential campaigns.

Virginia Sen. Tim Kaine is the lone senator running for a different office, as he campaigns to become vice president on the ticket of Democratic presidential nominee Hillary Clinton.

Kaine has not voted in any Senate roll calls during September, but while leaving his office in the Russell Building earlier this month, he did say that he could be back if needed for a key vote.

“It's all depending on [the] voting schedule,” Kaine said.

Bridget Bowman contributed to this report.