Female donors are skyrocketing and more women are considering runs

From left, Reps. Kyrsten Sinema of Arizona, Katherine M. Clark of Massachusetts and Joyce Beatty of Ohio raise their fists during a photo op for the House Democratic women on Jan. 4. (Cliff Owen/AP file photo)

Democratic lobbyist Anne MacMillan recalls sitting at small political fundraising dinners not long ago, with men filling all the chairs around her.

“Generally, the conversation would circle around hunting or fishing or golf, or something I couldn’t even participate in,” said MacMillan, a former aide to House Minority Leader Nancy Pelosi.

With the 2018 midterm elections nearly one year away, MacMillan said she has never seen so much interest in political engagement among her female colleagues and friends — and an analysis of federal campaign finance data supports her observation.

The number of female donors to federal candidates and committees has skyrocketed by roughly 284 percent so far in the 2017-18 election cycle compared with this time in the 2015-16 cycle, according to research from the nonpartisan Center for Responsive Politics. The number of women donating to a federal campaign has increased by a staggering 670 percent when compared with the early months of the 2011-12 cycle.

[Podcast: Women’s Political Power in the Age of Trump]

Hundreds of thousands of women like MacMillan — from the K Street lobbying corridor to suburban avenues across the country — are spurring a dramatic shift in the demographics of political donors, while at the same time record numbers of women explore running for office. Those are the two areas in politics with the biggest gender gap, where women have long lagged behind men.

Much of the new enthusiasm on the Democratic side stems from opposition to President Donald Trump’s agenda and momentum from the women’s marches across the country to protest his inauguration. But Republican women are also working to mobilize their own.

“I’m seeing women, to take Sheryl Sandberg’s phrase, leaning into politics like never before,” said Debbie Walsh, director of the Center for American Women and Politics at Rutgers University, referring to the Facebook chief operating officer’s book, “Lean In.”

Much of the leaning in by female donors comes from those who give in small increments that eventually trigger the $200 threshold required for reporting to the Federal Election Commission. These female small-dollar donors, most of whom are giving to Democrats, have surged by more than 900 percent in the first six months of this year, compared with this time two years ago, according to the Center for Responsive Politics’ analysis.

“Liberal women are rising up and getting more involved,” said Sheila Krumholz, executive director of the center, which uses software and manual research to determine the gender of most donors.

Still, despite the gains among women donors — and candidates — men continue to keep the edge among contributors and members of Congress. Women make up 50.8 percent of the country’s population, according to the 2010 census, but hold 21 out of 100 Senate seats and represent about 19 percent of voting House members.

Many of the women considering a run for office will ultimately not pursue it, and others who do will lose in primaries or general elections. But female candidates, especially Democrats running for Senate seats, will feature prominently in some of 2018’s most pivotal races. And women donors feel energized.

“There is definitely a ton of enthusiasm about the possibilities for gains in the midterms,” said Kountoupes, who worked in the Clinton White House. “The uptick in political engagement will manifest itself in a lot of ways, including donations.” 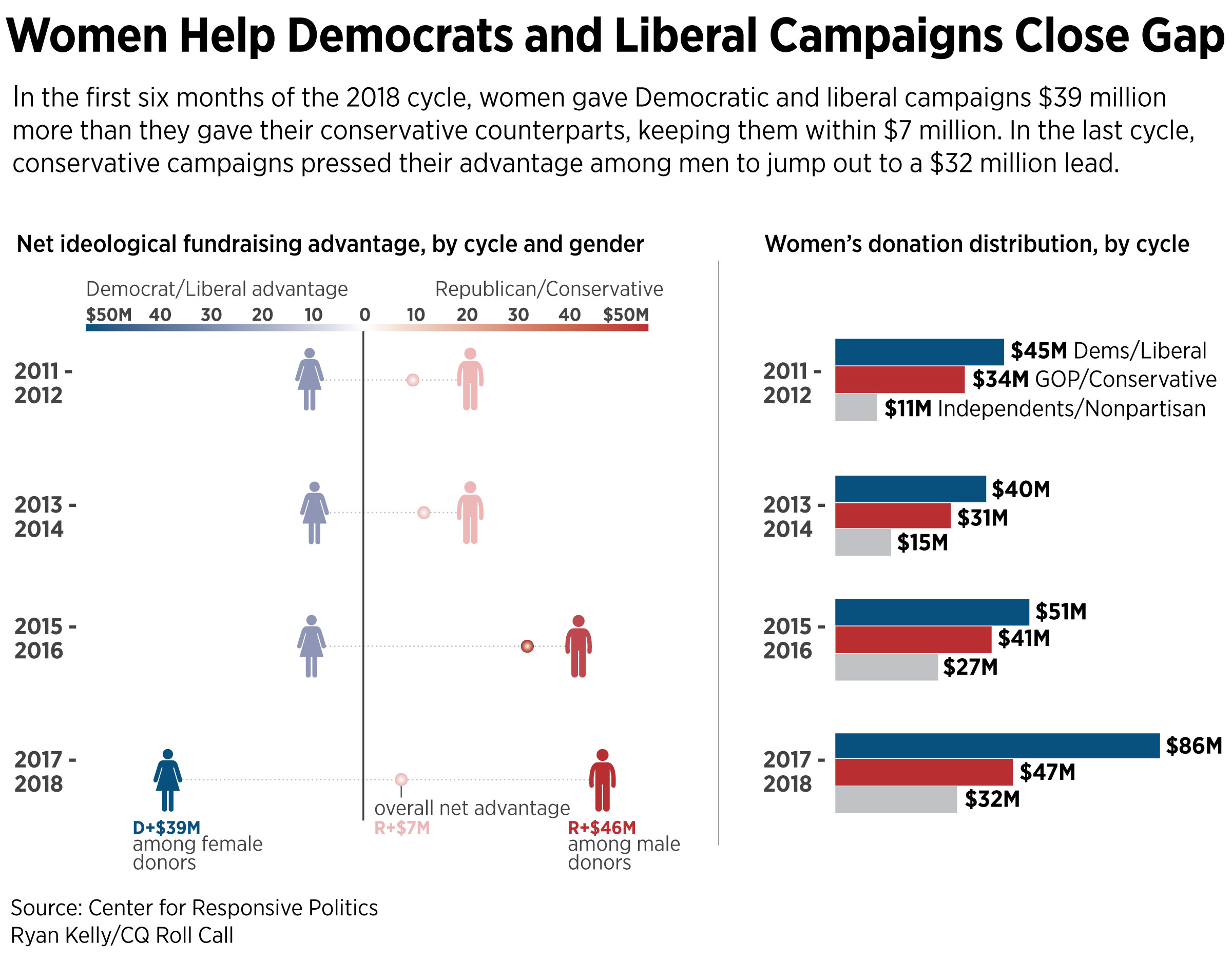 More than 18,000 women so far have reached out to EMILY’s List, which raises money for female Democratic candidates who support abortion rights, to solicit guidance in running for federal, state or local office, said vice president of campaigns Lucinda Guinn. Just 920 women contacted the group about exploring a run for office in 2016.

More than a third of all donations to EMILY’s List this year have come from new donors, and nearly half of all donors have been new donors, the group’s data show.

“This is a bench we have an opportunity to cultivate for years to come,” said Guinn, who has tripled her state and local staff to 15 people.

She said the president’s past comments about grabbing women by their genitals, along with efforts by the Trump administration and the GOP Congress to defund Planned Parenthood and replace the 2010 health care law, have mobilized liberal-leaning women.

Republican women, who voted overwhelmingly for Trump, generally don’t share that opposition, but the party nevertheless is attempting to draw in more female donors and candidates.

“We have a lot of women entrepreneurs and very successful women CEOs who are more conservative, and we’re trying to develop relationships with them,” said Rep. Mimi Walters, a California Republican.

Walters and Sarah Chamberlain of the Republican Main Street Partnership started the Women2Women PAC this year to fund female GOP candidates. “You see this on both sides, women haven’t traditionally given to political races like the men have, and we’re trying to change that culture and that narrative,” Walters added.

Just as the gender gulf among donors and candidates exists in both parties, some of the response is bipartisan.

Sen. Amy Klobuchar, a Minnesota Democrat who is up for re-election next year, said she invited her Republican colleague Susan Collins of Maine to speak this spring to Women Winning, a Gopher State group that supports abortion rights.

“On my campaign and at events I have been part of for other women candidates, we have seen growing excitement from our women donors,” she said.

Having Hillary Clinton on the ballot last year may have helped inspire more women to donate and to launch their own campaigns. Clinton’s presidential campaign raised a majority of its money, 52 percent, from women, who may now be turning their cash toward congressional and even local candidates.

“It can become habitual,” said Jennifer Lawless, who runs the Women & Politics Institute at American University.

While women candidates and political donors still do not equal men in number, an even greater gulf exists for donors and candidates who are women of color.

That reality is part of the reason why Stefanie Brown James, a former Obama campaign official who runs the firm Vestige Strategies, launched the Collective PAC along with her husband, Quentin. The political action committee raises money for female and male candidates of color at all levels of government.

“Especially for black women, raising money is oftentimes a major deterrent to why they don’t get into politics or run for election. You have to get to the point where you feel comfortable asking people for money — family, friends and strangers,” Brown James said.

“You have the rise of black women candidates, black women donors, but also just black women are really getting attuned to how the entire system works and how to make change in their community. It really comes down to policy and who is writing that policy,” she said.

And getting involved in the donating process can help broaden a contributor’s imprint on policy decisions.

Among the candidates Collective PAC supports for the 2018 cycle is Stephany Rose Spaulding, a Democratic candidate for Colorado’s 5th Congressional District. She is vying for the seat now held by Rep. Doug Lamborn, a Republican.

“Donors have a lot of influence on candidates for good and for bad,” Brown James said.

Despite the promise of bigger numbers heading into 2018, the long-term gains that women donors and candidates may make toward permanently closing the gender divide remain uncertain.

Even on K Street, where political fundraising dominates the business culture, men still outnumber women this cycle among the industry’s biggest donors.

“I have young children, and I’m pregnant now, so it’s hard to do all the evening-type schmoozing,” said MacMillan, who works at the firm Invariant.

She is committed to writing checks through the Jenkins Hill Society, a network of Democratic women donors, and carves out time to attend its events for women lawmakers. She finds the schmoozing opportunities more useful than the hunting and fishing conversations.

Women lobbyists may not run as many firms as their male counterparts, and female lawmakers may not hold equal numbers of their parties’ top slots on committees.

But MacMillan said, “We will all get there.”