3 Trump nominees still due to testify on Thursday

By RYAN LUCAS AND EMILY WILKINS

Updated 5:45 p.m. The Senate Intelligence Committee has pushed back the confirmation hearing for CIA Director-designee Mike Pompeo from Wednesday to Thursday — one of a series of delays or postponements affecting the crowded confirmation schedule.

The Intelligence panel did not provide a reason for the change, but the hearing for President-elect Donald Trump’s pick to the lead the CIA was one of five originally scheduled for Wednesday. It will now join two other confirmation hearings planned for Thursday, including another key national security post — Defense secretary. 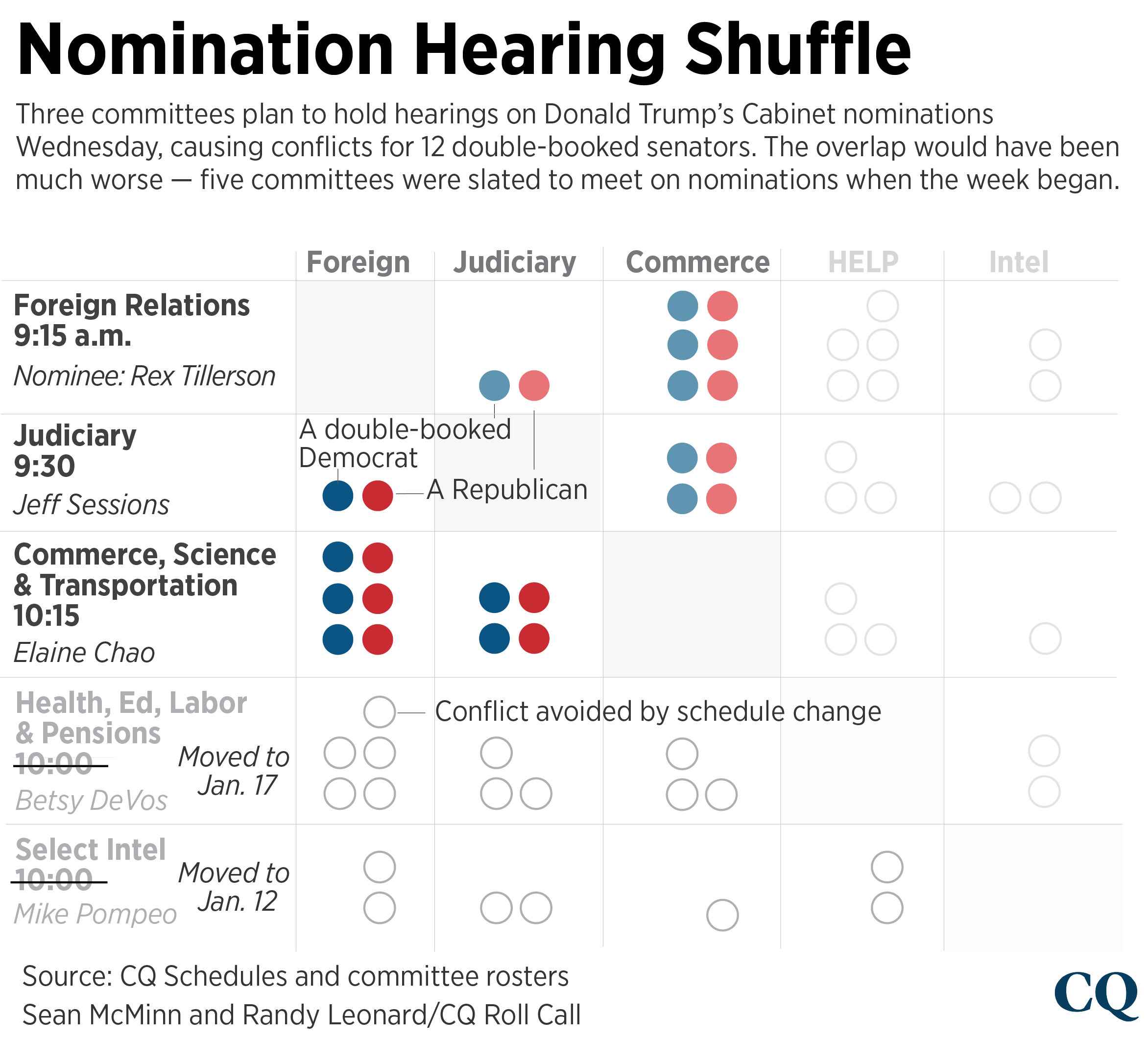 Pompeo, a 53-year-old Republican congressman from Kansas, is expected to have a smooth path to confirmation.

Elsewhere, the confirmation hearing for Betsy DeVos, Trump’s pick for Education secretary, has been moved to Jan. 17, a decision announced late Monday night by the Senate Health, Education, Labor and Pensions Committee.

The hearing was initially scheduled for Wednesday. Democrats have  raised concerns that not all nominees have completed the process of disclosing their finances to the Office of Government Ethics, which screens candidates for potential conflicts of interest. As of Monday night, the office had not made any documents on DeVos public.

Senate HELP Chairman Lamar Alexander of Tennessee and ranking Democrat Patty Murray of Washington said in a joint statement that they changed the date at the request of leadership, but offered no further details Monday night.

Some Democratic senators and advocacy organizations have questioned DeVos' potential conflicts of interest due to her extensive political donations. The additional time, an aide to Murray said, will allow DeVos to complete the OGE paperwork.

The confirmation hearing of Wilbur Ross for Commerce secretary was also moved from Thursday to Jan. 18. Commerce, Science and Transportation Committee Chairman John Thune, R-S.D., and ranking member Bill Nelson, D-Fla., said the panel hasn't yet received an ethics agreement the billionaire investor is working on with the Office of Government Ethics and the Commerce Department.

And the confirmation hearing for fast food executive Andy Puzder, nominated for Labor secretary, has been rescheduled from Jan. 17 to potentially next month.

The original confirmation hearing date was only tentative for the CEO of CKE Restaurants, and a new date has not been set, according to an aide to Alexander.

“Because of the complicated Senate calendar in January, the hearing may not be until February,” the aide said in a statement to Roll Call. Democrats are gearing up to grill Puzder on a number of issues including treatment of workers at some of his Hardee’s and Carl’s Jr. burger restaurants.