What's so far missing is money to address epidemic

The House is finally weighing in on the nation's opioid epidemic this week with a flurry of bills, after a mounting death toll over a number of years.

Amid rising pressure from families, advocacy groups, public health experts and even the White House, the House is scheduled to offer some possible solutions to the epidemic that the Senate did not include in the legislation it passed two months ago.

But critics say that both the Senate and the House so far have failed to adequately address a key issue: paying for it.

"The unwillingness of the Republicans to either in the Senate or in the House to add funds for this effort is undermining, I think, its success," said House Democratic Whip Steny Hoyer, D-Md..

The House is taking up 18 bills this week. Among the proposals: allowing patients to only partially fill opioid prescriptions, requiring the Food and Drug Administration to work with expert advisory committees before approving opioid products and drug labels and expanding residential treatment programs for pregnant and postpartum opioid addicts.

On Friday, the bills the House passes will be packaged and amended into the Senate-passed Comprehensive Addiction and Recovery Act (CARA). The two chambers will then form a conference committee to work out their differences on the legislation.

The legislative process the House and Senate have employed on the opioid bills may be slow-moving given that thousands of people die every year from abusing opioids like methadone, oxycodone and hydrocodone. 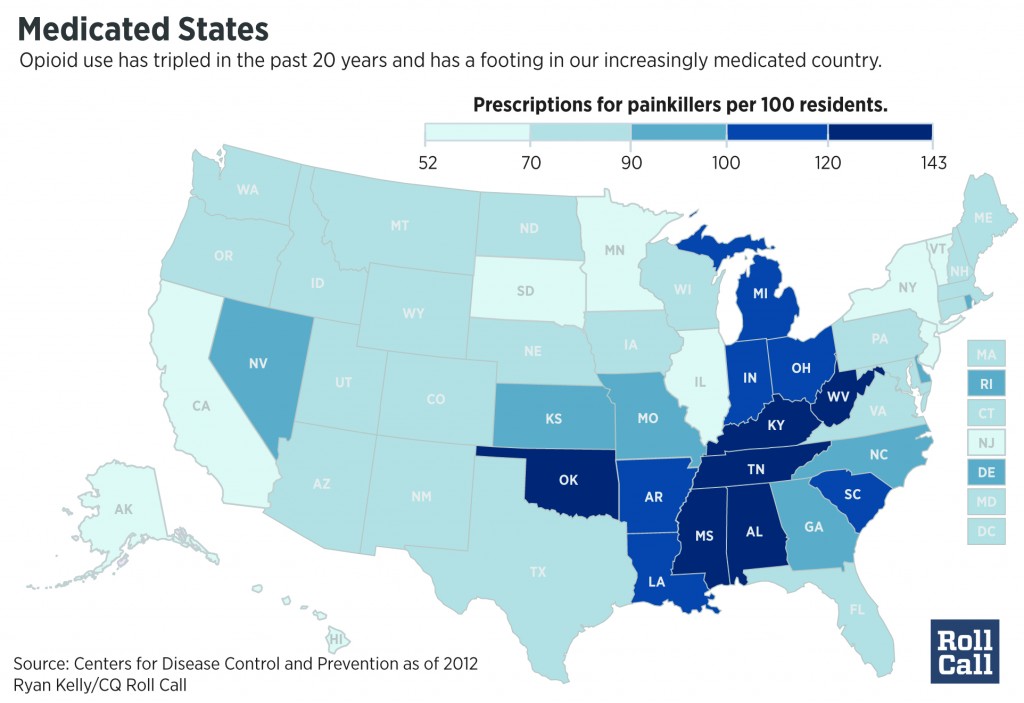 But it it responds to a demand from members to make the legislative process more predictable and inclusive of rank-and-file members.

Sen. Rob Portman, R-Ohio, a lead sponsor of the Senate version  of the bill, said in an op-ed Monday that the House bills are "good" but that they don't go far enough.

"More than 70 anti-drug groups have publicly expressed concern that these House bills omit critical initiatives focused on treatment and recovery," he wrote.

The Obama administration said in a statement Tuesday that unless the House can provide additional money for treatment and prevention, the bills on the table this week might “do little to help the thousands of Americans struggling with addiction.”

The administration points to statistics highlighting the urgency of the problem: opioids were involved in 28,647 deaths in 2014, and 259 million prescriptions were written in 2012 for prescription opioids, more than enough to give every American adult their own bottle of pills.

“These trends will not change by simply authorizing new grant programs, studies and reports,” read the statement. “Congressional action is needed to fund the tools communities need to confront this epidemic and accelerate important policies like training health care providers on appropriate opioid prescribing, an essential component of this effort.”

During debate on the Senate measure, Sen. Jeanne Shaheen, D-N.H., offered an amendment to include $600 million in emergency funding but it was rejected. Republicans argued that the fiscal 2016 omnibus appropriations measure included $400 million for opioid-specific programs that can be used this year and that additional funds can be appropriated for fiscal 2017 and beyond.

Rep. Joe Courtney, D-Conn., tried to offer a similar amendment in the House, but the Rules Committee didn't include it among the allowed amendments. Democrats are likely to use procedural maneuvers to drive home their point on funding. Shaheen said if House Democrats also fail attach emergency funding, she hopes some funding can be added in the conference committee report.

Republicans are open to spending more money on opioid abuse prevention and treatment programs if the money is offset with spending cuts elsewhere.

Both the House and Senate measures provide authorization but not appropriations for millions in new or expanded grant programs, overseen by the Departments of Justice and Health and Human Services.

Treatment providers said they are thrilled that Congress is focused on the issue, but can't yet tell how effective the final legislation might be.

“This is the most legislation that has been evaluated, and possibly passed, in the history of addiction,” said R. Corey Waller, chairman of the legislative advocacy committee at the American Society of Addiction Medicine. “But we know we have a small window to get it right, and we really want to get it right.”

Treatment providers praised a measure that would make it easier for women to get addiction treatment while they are pregnant or immediately after giving birth. They also said that both House and Senate bills appeared to improve standardization of training for medical professionals who treat addiction and to recognize that nurse practitioners and physicians assistants play important roles in that process.

But Kelly Clark, president elect of the American Society of Addiction Medicine, and others also expressed concern about a watering down of what they said was one of the most significant parts of the bill: a proposed expansion of the number of patients providers can treat with buprenorphine, a mild narcotic that helps prescription opioid and heroin addicts cope with the symptoms of withdrawal.

Federal regulations currently prohibit doctors from treating more than 100 patients with buprenorphine. One House bill,  ( HR 4981 ),  would have raised the cap from 100 patients to 250.

But a preliminary analysis from the Congressional Budget Office found that this change would have cost taxpayers $750 million over 10 years due to the increased number of beneficiaries under Medicare, Medicaid and military health care. Lawmakers have yet to agree on offsets to cover the expense.

If Congress fails to raise the cap, it will still likely go up. The administration has authority to unilaterally raise the cap and has proposed to bring it up to 200.