What to See and Do in Selma

Posted Feb 27, 2015 11:30 AM
Jason Dick
@jasonjdick
Impeachment clouds hang over home stretch of Iowa caucuses Waiting for Pelosi: The Senate theater of the absurd The year in Political Theater: Our favorite 2019 podcasts

The city of Selma prepares for the 50th anniversary of "Bloody Sunday." (Bill Clark/CQ Roll Call)

SELMA, Ala., — Every year, Rep. John Lewis, D-Ga., makes a pilgrimage here to walk the Edmund Pettus Bridge, tracing the fateful steps he took on March 7, 1965, when he and others marching in favor of voting rights were savagely beaten by state troopers and thugs.

Friends, activists and fellow members of Congress have frequently joined him over the years, but not in the numbers expected for the upcoming 50th anniversary, when about 100 of his colleagues and President Barack Obama are expected to help him mark the half-century mark since "Bloody Sunday." If you're heading there yourself, here are a few things to check out, including places where the Selma to Montgomery March was planned, as well as a great spot for a proper Southern breakfast. Photographer Spider Martin's images of "Bloody Sunday" and the subsequent march to Montgomery are the ones most often burned into our consciousness. Lewis and Hosea Williams facing troopers just before the billy clubs and tear gas were unleashed, Martin Luther King Jr. leading the march across treacherous territory.

The ArtsRevive group is running a retrospective of Martin's pictures at its Carneal Building on Water Avenue and Church Street. It runs daily March 2-14, and then on Fridays and Saturdays through March 28, from 11 a.m. to 4 p.m. Appointments can be arranged by calling 334-878-2787. Lewis checked it out on Feb. 14, marveling at how young he once was, a visit chronicled by the Selma Times-Journal. The Brown Chapel AME Church, where march organizers amassed and retreated, is a national historic landmark and is located at 410 Martin Luther King Jr. St. The Selma to Montgomery Historic Trail begins here.

The Selma Interpretive Center is catty-corner from the Pettus Bridge at 2 Broad St. and contains, among the exhibits, various books about the march, including the first two volumes of Lewis' graphic novel series, "March" and "March: Book Two." At the foot of the bridge is the Selma Times-Journal building, a small newspaper with a big heart that chronicled the events of 50 years ago, and continues to do the city proud.

Down at 1200 Water St. is the St. James Hotel, a property dating to 1837 and host to, among others, Frank and Jesse James. It's not a bad place to have a beverage and hang out in the French Quarter-style courtyard.

On the east edge and under the Pettus Bridge is the Civil Rights Memorial Park, a quiet, home-grown place that memorializes martyrs such as Jimmie Lee Jackson and James Reeb. It's a less institutionalized, yet organic tribute on the banks of the Alabama River. 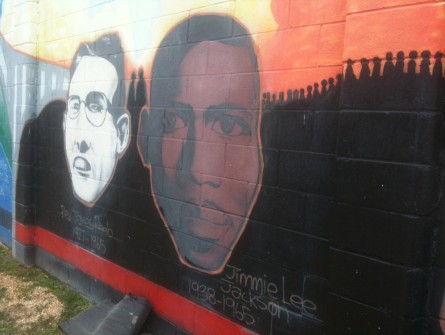 Jackson and Reeb, among others, are given tribute at the foot of the bridge. (Jason Dick/CQ Roll Call)

And for that proper Southern breakfast? That'd be the Downtowner Restaurant, at 1114 Selma Ave. Eggs, sausage, grits, biscuit and some coffee ought to do the trick, and for less than $10.

Related: The Selma to Montgomery Bicycle Ride: Civil Rights and Bamas Terri Sewell Proves You Can Come Home Again The Democrats’ Lost Opportunity in Birmingham Native Son Bidding For a Sweet Return to Montgomery Newseum Books John Lewis For More 'March' Talk The 114th: CQ Roll Call's Guide to the New Congress Get breaking news alerts and more from Roll Call in your inbox or on your iPhone.