Sanders told supporters they had "sent a message that will echo from Wall Street to Washington." (Spencer Platt/Getty Images)

Donald Trump and Sen. Bernard Sanders lodged a solid complaint against both parties’ establishments with their victories in New Hampshire’s first in the nation primary on Tuesday.

Trump won by the widest margin since the 2000 GOP primary, with more than twice the vote of second-place Ohio Gov. John Kasich, who had declared New Hampshire make or break for his campaign.

Sanders won by an even larger margin over Clinton, 60 percent to 38 percent, after a stronger than expected performance in Iowa, where he missed upsetting the former secretary of state by two-tenths of a point.

But the biggest story of the night was Sen. Marco Rubio’s stunning fall from grace after a disastrous debate performance on Saturday. Rubio finished a disappointing fifth after rising to second in some New Hampshire polls since a stronger than expected third-place finish in Iowa.

Roll Call's 2016 Primary Calendar Rubio acknowledged his poor performance in a speech to supporters Tuesday night, “Our disappointment is not on you, it’s on me. I didn’t not do well on Saturday night. But listen to me – that will never happen again.” 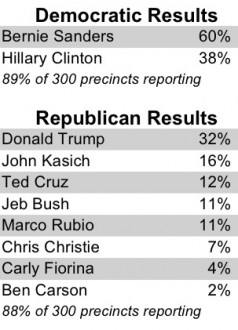 If there was any consolation for Rubio, New Jersey Gov. Chris Christie, his antagonist in the debate, told supporters in New Hampshire Tuesday night that he was heading home to New Jersey “to take a deep breath” instead of to events in South Carolina after a disappointing sixth-place finish in a state his campaign was counting on for a breakout.

Texas Sen. Ted Cruz, winner of last week’s caucuses in Iowa, finished third and Florida Gov. Jeb Bush finished fourth. Former HP CEO Carly Fiorina finished with 4 percent of the vote and Ben Carson, who was at one time battling Trump for the lead in national polls, finished with 2 percent.

Kasich had invested much of his campaign on the ground in New Hampshire, holding more than 100 town hall meetings around the state. He has criticized his opponents’ “crazy” rhetoric and tried to portray himself as a uniter.

“Something big happened tonight,” he told supporters Tuesday night. “Maybe, just maybe, at a time when clearly change is in the air, we’re turning the page on a dark part of American politics, because tonight the light overcame the darkness.”

National front-runner Trump was forced to rethink his strategy after finishing second in Iowa. Cruz’s sophisticated ground game got lots of credit for his win and Trump turned out volunteers in New Hampshire this week to turn out the vote.

“We learned a lot about ground game in just a week, I’ll tell you that,” he told the cheering crowd at his victory party.

Sanders nearly shocked Clinton and the Democratic establishment in Iowa last week, finishing two-tenths of a point behind the former secretary of state. He had held a lead over Clinton in most New Hampshire polls for the last month and Clinton hoped to close the gap in the state that gave new life to her 2008 campaign against Barack Obama.

Roll Call's Endorsement Tracker But Sanders consistently contrasted his disdain for super PACs and Wall Street to Clinton’s ties to both.

“Together we have sent a message that will echo from Wall Street to Washington, from Maine to California,” Sanders said at his victory party. “And that is that the government of our great country belongs to all the people and not just a handful of wealthy campaign contributors and their super PACs.”

Clinton appeared to have accepted her vulnerabilities and acknowledged both in her concession speech.

“You’re not going to find anyone more committed to aggressive campaign finance reform than me,” she told the crowd at her concession speech, and later: “We also agree that Wall Street can never be allowed to threaten Main Street.”

The Republican campaign next moves to South Carolina on Feb. 20, where Trump holds a large lead in polls over Cruz, and Kasich dwells near the bottom. Clinton could be vulnerable again in Nevada, where Democrats caucus on Feb. 20, because many there hold Wall Street responsible for the state’s worst in the nation mortgage foreclosure rate from the 2008 housing market collapse.