The Lighter Side of the Benghazi Hearing (Video)

It wasn't all dark at the Benghazi hearing. (Al Drago/CQ Roll Call)

While the tone of the House Select Committee on Benghazi's hearing with Hillary Rodham Clinton has largely remained somber or even emotional, there were lighter moments. During a line of questions from House Freedom Caucus Chairman Jim Jordan, R-Ohio, on whether a YouTube video sparked the 2012 attack at the U.S. embassy in Libya, the former first lady and secretary of State couldn't help but plug her 2014 biography.

"I wrote a whole chapter about this in my book, 'Hard Choices.' I would be happy to send it to you, congressman," Clinton said.

Clinton to Jordan: Read My Book

And when the panel's chairman, Republican Rep. Trey Gowdy of South Carolina, read aloud her email correspondence with journalist and friend Sidney Blumenthal in which he criticized President Barack Obama, she was ready with another zinger.

"If you don't have any friends that say unkind things privately, I commend you," Clinton said.

Perhaps most notable were the hearing's attendants.

There was Rep. Sheila Jackson Lee, D-Texas, of front-and-center State of the Union address fame, sitting just a few rows behind Clinton, right in the camera frame. 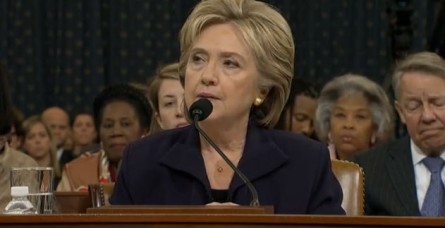 Rep. Charles B. Rangel wasn't content to merely sit among the crowd below. He made his way to what was maybe the best seat in the room, the GOP side of the dais — despite not being a member of the committee.

And videos, graphics and documents shown during the hearing may have provided for good questioning, but clearly not be enough to keep the Democratic congressman awake, as he appeared to doze off during the hearing.

Charlie @cbrangel -- on GOP side of Benghazi dais -- appears to have nodded off. pic.twitter.com/6EQrjD5HTn

Save for later
Topics: slugfest icnw