The Best Congressional Tweets on #Popeapalooza

After rolling into town late Tuesday in an armor-plated Fiat, Pope Francis made his public debut Wednesday via an early morning visit to the White House and a carefully choreographed lap around the Ellipse. 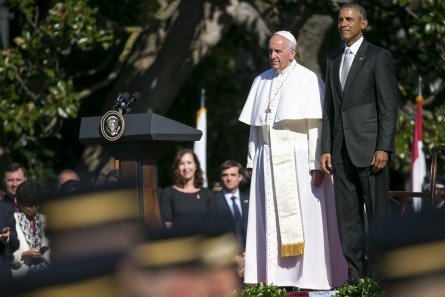 Francis stands with Obama during a state arrival ceremony for Pope Francis on the South Lawn of the White House. (Al Drago/CQ Roll Call)

Lawmakers from across the political spectrum seemed thrilled to have the head of the Catholic church around, sharing candid pics and heartfelt observations about the momentous occasion on social media. One-time seminarian Rep. Gerald E. Connolly, D-Va., appeared to take the whole two-worlds-colliding thing in stride.