A couple of generations ago, America's top sports were baseball, horse racing and boxing. Times change, but the Senate's top two leaders love to kick it old school.

Look no further than the upcoming Friday, when the chamber won't be in session, providing valuable travel and hang-out time in Kentucky and Nevada for two marquee events. Senate Majority Leader Mitch McConnell, R-Ky., and Minority Leader Harry Reid, D-Nev., are avowed Washington Nationals fans and support the home baseball team here in the District.

But this coming weekend, expect McConnell to take in the ponies at the 141st Kentucky Derby, checking out the run for the roses at Churchill Downs in Louisville. The majority leader loves the tradition of the race, and has even used it in campaign ads.

In an early ad for this 2014 re-election campaign, McConnell cut a spot that played up the traditions of the Derby. "When winter gives way to spring and late afternoons begin to brighten for the promise of warm summer nights, my old Kentucky home becomes everyone's home on the first Saturday in May. The twin spires of Churchill Downs host the world's finest horses. But it’s a race where the horses tell us as much about a people as they do about themselves. If you listen closely, you can hear the story of Kentucky in the thunder of their hooves. Each stride reflects the focus of a people determined to succeed,” McConnell's voice-over says among images of horses, race track and a "Team Mitch" logo with "Approved by Mitch McConnell Paid For By McConnell Senate Committee '14" in boxed outline.

And across the country, expect Reid to settle into a ringside seat at the MGM Grand in Las Vegas on Saturday to see his pal and fellow boxer/lawmaker Manny Pacquiao fight Floyd Mayweather in a welterweight fight. How much of a fan is Reid? He even helped settle a nagging contract dispute that paved the way for the multi-million dollar fight, Yahoo Sports reported. 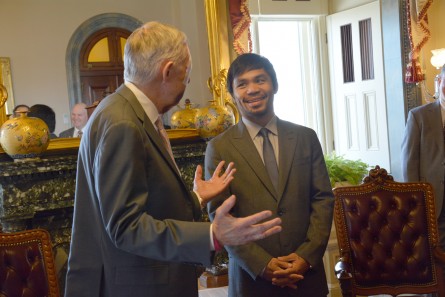 Reid, a former boxer, and Pacquiao are close friends. In addition to being a boxer, Pacquiao is a member of Congress in the Philippines and stumped for Reid in his tough 2010 re-election battle, which he eked out against Republican Sharron Angle in a rough year for Democrats. Pacquiao's promoter, Top Rank, is headed by Bob Arum, a big Reid backer.

Reid, who is retiring after his current term ends in 2016, recently consulted with Pacquiao about the horrific eye injury the Nevada Democrat sustained earlier this year. Pacquiao was on Capitol Hill in February, USA Today reported .

For Reid and McConnell, two long-time antagonists, their sporting life is just part of the political life.