Capito, right, speaks with Saba Ahmed during the "Empowering Leaders for the Future" Women's summit hosted by the RNC. (Tom Williams/CQ Roll Call)

Sharon Day rose through the ranks of GOP politics, starting as a precinct captain in her native Florida and eventually co-chairing the Republican National Committee.

But Day said she'd never be in the position she's in today if people hadn't empowered her to run for those roles. And she's made it her mission to pay it forward to encourage more Republican women to become activists in the party and to run for office — all in the hopes of making women a more integral part of the GOP.

"I think for women, we're built different than men in that we won't go out blindly and run for something," Day told CQ Roll Call last week at the The Willard hotel, where the RNC was hosting a summit to encourage Republican women to take a more active role in politics.

"Women have to have the knowledge to go forward and they have to feel comfortable that they have that ability and that knowledge," Day continued. "So I think what we try to encourage and offer is that, if you want to be a candidate or an activist, these are the tools that we have at the RNC and here is how you use the tools and the abilities that you have."

The Oct. 2 event was part of a series of gatherings the RNC has held over the past few years to encourage Republican women to come out from behind the curtain and run for office, run campaigns or merely inform their friends and neighbors about Republican ideas and goals.

About 150 Republican women were in attendance from all over the country, from New York  to Alaska, and all were seeking to learn about the tools to help break the narrative that Republican women are rare.

"A lot of people tend to think that men tend to be more Republican, but there are so many Republican women out there that are just waiting to get involved," said Susie Hudson, secretary of the RNC. "They're looking for a reason to get involved, and they're finding that as time goes by with the economy, they're seeing how their families are impacted directly, and I think that's really inspiring them to move forward and want to be involved in the party."

GOP leaders find these summits are working to get more women active in the party.

Last year, 10 women who attended one such summit in Little Rock, Ark., ended up winning seats in the Arkansas state legislature, bringing the total number of women in both the state House and state Senate from 23 in 2014 to 27 in 2015. Jill Upson, who also attended an RNC women's summit last year, went on to become the first black female delegate in West Virginia's House of Delegates. 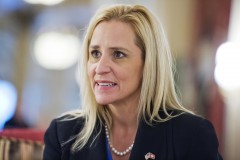 Rutledge said the event "does empower you with the education of how to connect with voters, how to share your message, how to share our conservative ideals." (Tom Williams/CQ Roll Call)

Sen. Shelley Moore Capito, the first woman elected to a full term in the Senate from West Virginia, spoke at a lunch during the day-long conference. She said the more women who are active in GOP politics, the more power they will have to effect Republican priorities and messages.

"The more women we engage in politics and public service, the stronger influence we will have on the direction of our country," Capito told CQ Roll Call. "In order to take back the White House in 2016 and create a better future for America, we must empower Republican women to lead the way."

Others who attended said the day was a good way for Republican women, who are portrayed as "odd creatures," to band together to fight that stereotype.

"We've been frankly maligned by the left as some kind of odd creature. It's considered funny on the left to say, 'Why would a woman be a Republican?' We don't find that funny at all," said Jean Card, who is a member of the RightNOW Women PAC, which seeks to elect more GOP women to federal office. "We know why we're Republicans. ... It also creates a camaraderie in a room of women like this today, with women who, they know that people on the other side are making fun of them for being in a room like this today, and that gives us something in common that we want to combat."

Related: Roll Call Race Ratings Map: Ratings for Every House and Senate Race in 2016 Get breaking news alerts and more from Roll Call in your inbox or on your iPhone.