Perhaps Rep. Paul Gosar is feeling a little left behind after his very public spat with Pope Francis? He appears willing to bear that cross for just a bit longer — assuming his continued suffering translates into a flood of donations from outraged right-wingers. 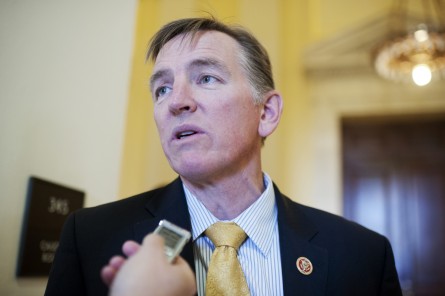 The Arizona Republican, a self-described "proud Catholic" bailed on hearing the pontiff speak on Sept. 24 over a difference of opinion on climate change. Not much happened in the interim until Wednesday, when he appealed to fellow conservatives for an infusion of cash just ahead of the third quarter fundraising deadline.

“I believe when a Pope chooses to act and talk like a leftist politician, then he can expect to be treated like one,” Gosar railed in an email blast. As part of his pitch to procure $25,000 in quickie contributions, Gosar points out that the boycott has exposed him to mounting scorn.

“Ultra-liberal website Salon.com called my principled stand ‘absurd,’” he chronicled, adding that another online outlet “had the nerve to lecture me (a lifelong Catholic) on ‘what I got wrong’ about the Catholic Church.”

"Late Show" host Stephen Colbert also lit into him during his popeapalooza coverage.