Updated 12:29 p.m. | President Barack Obama's enormous 6-3 win in the Supreme Court upholding subsidies nationwide for Obamacare — and preserving his signature domestic accomplishment — sets up what has the makings of the biggest week of his second term. "The Affordable Care Act is here to stay," Obama said in a celebratory Rose Garden statement.

Obama also has his top legislative priority — Trade Promotion Authority — heading to his desk after a series of near-death experiences. The court will rule on legalizing same-sex marriage in the next few days, with the White House hoping for another big win.

And the White House also hopes to reach a deal with Iran in the coming days on its nuclear program.

But the ruling in King v. Burwell authored by Chief Justice John G. Roberts Jr. clearly comes as a huge relief to the president, who had expressed irritation the court had even considered a case that could have ripped subsidies from about 6 million people in more than half the states because of what Democrats considered to be the legislative equivalent of a typo. 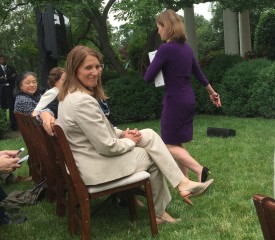 "This is no longer about a law ... this is health care in America," he declared. He put the law on a pedestal along with Social Security and Medicare, finishing the job of those earlier efforts at providing security for Americans.

The decision meanwhile puts Republicans back to square one in their legislative strategy, shorn of any real leverage to roll back the law in any significant way unless a Republican president takes office in 2017. While leaders all said they will continue efforts to roll back the law — and they could theoretically send a bill doing just that using budget reconciliation procedures, that would merely be veto-bait.

The only opportunity on the horizon to do anything appears to be repealing the medical-device tax, which appears to have close to enough support to override a veto .

Obama, for his part, declared he was ready to work with both parties to make health care "even better" and called on everyone to get back to work.

For now, though, this is a moment everyone in the administration appears to want to savor.

Supreme Court Upholds Obamacare Subsidies in King v. Burwell See photos, follies, HOH Hits and Misses and more at Roll Call's new video site. Get breaking news alerts and more from Roll Call in your inbox or on your iPhone.