Obamacare Bill Vetoed With No 'Pomp and Circumstance'

With little public fanfare, President Barack Obama on Friday vetoed a Republican-crafted measure designed to repeal his signature health care overhaul. But Republican leaders are signaling their repeal push is far from over.

In a statement, Obama said the health care overhaul "is working," slamming the bill because it would "reverse the significant progress we have made in improving health care in America." "The Affordable Care Act includes a set of fairer rules and stronger consumer protections that have made health care coverage more affordable, more attainable, and more patient centered," Obama added.

The measure’s quiet death stood in sharp contrast to the very loud and public debate that has characterized the  president's health care push from conception to adoption to implementation. It also would have defunded Planned Parenthood, which was the subject of its own partisan uproar last year.

“It’s no surprise that someone named Obama vetoed a bill repealing Obamacare," Speaker Paul D. Ryan, R-Wis, said. "But we will hold a vote to override this veto, taking this process all the way to the end under the Constitution.

Fewer than 24 hours after the Senate-approved measure cleared the House on a mostly party line vote, Ryan told reporters he could not think of a “better way” to start the year than sending Obama — for the first time — a bill to repeal his health care overhaul. 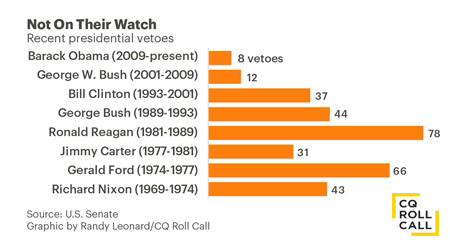 Mere minutes after the chamber approved the bill, Republican lawmakers began blasting out statements hailing the vote as a major victory.

“It is time to hold this president responsible not only for his failed, unpopular D.C. takeover of Americans’ health care system,” Huelskamp said. “Americans have felt the wrath of Obamacare for far too long. It’s bad, broken policy that hurts families and small businesses. This is an important first step today; it’s my hope that this year we continue our progress in doing away with the failed Obama initiative and work toward a patient-centered replacement.”

For GOP lawmakers, passing a bill destined for Obama’s veto pen was indeed a first step.

Ryan trumpeted the legislative tactic used to ensure the Obamacare repeal bypassed Democratic opposition in the Senate. It’s called “reconciliation,” a truly Washington term for a budget maneuver that allows certain bills to be passed with a simple majority in the Senate, where procedural rules mean 60 votes are usually needed to end debate on legislation.

"The idea that Obamacare is the law of the land for good is a myth," Ryan said in a statement on Friday. "This law will collapse under its own weight, or it will be repealed. Because all those rules and procedures Senate Democrats have used to block us from doing this? That’s all history.

“We have now shown that there is a clear path to repealing Obamacare without 60 votes in the Senate," he continued. "So, next year, if we’re sending this bill to a Republican president, it will get signed into law."

The leading Republican presidential candidates all have vowed to repeal the Obama-pushed health law; the Democratic frontrunners want to keep it on the books and improve any flaws. Expect health care to be a major campaign issue, with voters faced with a choice between keeping it and scrapping it -- and, possibly, replacing it with a GOP-crafted alternative.

At the White House, Obama and his top deputies have long been clear he would veto any legislation that would defund or repeal what he considers a top achievement of his presidency.

“I think this may be a half-hearted -- or at least an ill-fated -- attempt on the part of some Republicans to try to pump some drama into another failed effort on their part to have any sort of success,” Earnest said, adding White House officials decided to focus on persuading people to sign up for coverage under the law rather than create any “pomp and circumstance” around the actual act of vetoing the bill.

“They succeeded in a victory that amounts to absolutely nothing. The fact is, the president will veto this bill. They know that,” Earnest said of Republicans. “They also know that they don't have the votes to override it. And in the meantime, we are actually seeing record numbers of Americans sign up at healthcare.gov for the benefits that are being provided to the American people through Obamacare.”