Noshtalgia: Catching Up With the Globe-Trotting Pasty

One of the most rewarding things about helping you, the loyal Noshtalgia reader, reconnect with cherished comfort foods (other than finding them or the most readily accessible analog possible, of course) is learning just how integral said memory-making-meals are to their respective communities.

I have heard, for instance, about the preponderance of mom-and-pop pasty shacks that supposedly dot the landscape of Michigan’s northernmost appendage. But having never trekked across the Lake Superior-facing stretch of the Wolverine State, I am unfamiliar with the iron grip the savory hand pies have on native Michiganders.

At least until Nick Sharkey shared his deep-seated longing with me. “I'm from the Upper Peninsula of MI. Pasties, a type of meat pie, are our local dish. I so miss them,” the senior data analyst with the Republican National Committee put out there on social media.

My interest officially piqued, I elected to take to heart the object of Sharkey’s affection.

Long Way From Home The pasty (pronounced pass-TEE) is such a celebrated part of Michiganders’ diets, it’s become the focal point of an annual food festival hosted in Calumet. Each summer, locals flock to “Pasty Fest” to feast on commercial (think: pasty eating contest) and homemade iterations (bake-off) of the coveted good.

Throwing a giant party for a pastry product might seem a little excessive to some.

But in this historic mining country, the food that helped sustain the immigrant workers who furiously toiled beneath the earth’s crust is still deemed worthy of acclaim.

The prevailing wisdom appears to have the first pasty passing between the lips of a hungry subterranean laborer after the Cornish arrived en masse to try their luck at unearthing precious metals during the 19th century.

The Midwest, however, was not the only staging ground for this gustatory incursion.

“Cornish tin miners brought their pies, traditionally taken underground for lunch, with them when they immigrated to the new world. And not just to Michigan; the Cornish introduced pasties to the mining country of western Pennsylvania, where they still appear, and have established outposts in the unlikely locations of Arizona and southern California,” the online journal British Food in America detailed in its investigation of far flung regional delicacies.

British expats may have planted the seed for this particular alimentary fixation, but it was subsequently co-opted by competing cultures — including the waves of freshly arriving Finns, Swedes, Croatians, Poles and Italians that followed.

Some believe necessity, not convenience or popularity, helped democratize the easily customizable comestible.

“WHY IS THE FOOD SERVED THE NIGHT BEFORE CHRISTMAS? People in the U.P. traditionally ate it then because they didn’t have much money for food, according to Copper Country native Kim Kelp, founder of U.P. Pasties in Plymouth. They saved their money for better food for Christmas dinner, and old scraps — people joke the pasty is so named because it’s stuffed with foods from 'past' dinners — were baked into a crust,” Detroit Free Press writer Zlati Meyer chronicled in December 2013.

The pasties Sharkey remembers most fondly sound like they were crafted directly from a Cornwall cookbook.

“Generally it's ground beef, potatoes, rutabaga, carrots and onions,” he said of the flavorful filling that haunts his dreams.

One local business owner is still seeking to strike the perfect balance between old and new — a learning process that includes cranking out tried-and-true offerings while also experimenting with multicultural favorites.

Mash It Up Back when he first opened the doors to the Pure Pasty Co. in a blink-and-you’ll-miss-it alleyway in Vienna, Va., owner/operator Michael Burgess wasn’t quite sure what to expect. 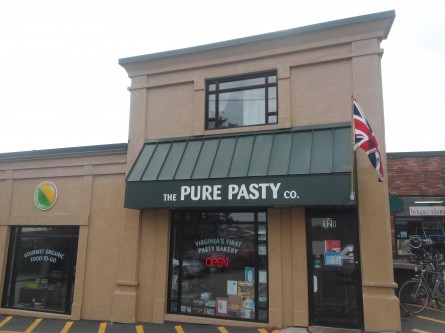 “It’s my first venture, but something I’ve wanted to do for the last 10 years,” the first-time restaurateur said of the niche bakery he introduced to the neighborhood in 2010. What began as a refuge for homesick Brits has since blossomed into a dining destination for hand-pie fans the world over.

“We have a really strong and diverse customer base in the shop. Yes, lots of Brits and Yoopers [inhabitants of the Upper Peninsula], but also … Aussies, Kiwis and South Africans too,” Burgess said of his evolving constituency.

Per one pasty pro, the pork pie — which is typically fashioned from seasoned swine, gelatin and lard — is “an acquired taste.”

"It's a traditional fox hunter's meal,” the shop aide explains when she spots me eyeing the porcine production.

Curiosity gets the best of me. So I go all in on the equivalent of a pork-filled Danish.

The crust is the same as every other pasty shell, buttery and soft. The coin of caramel colored gelatin on top gives me pause; the amber gel is astonishingly cloying. The pork patty is bolstered by hints of sage and dueling spices (white and black pepper), but is ultimately sabotaged by the surrounding layer of off-putting gelatin.

A traditional pasty is much more appetizing. The hearty meal is forged from meaty, crumbled beef, tender potatoes and a dulcet duo of carrot and onion, all rolled into thick rich dough. It’s easy to imagine a fatigued miner chowing down on one of these and immediately feeling revitalized for a good long while.

"My mom used to make these. But hers were just burger and onion," a neighboring customer informed her friend as they dug into their own grass-fed, beef-filled orb.

The chicken cordon bleu creation has a delicious tang to it; hot, juicy chicken, yielding spuds and slightly sugary ham mingle with melted Swiss and zesty paprika. The flaky crust seals the deal on this superbly executed number.

Raiding the fridge finally pays off as I unwrap the cold Scotch egg. The pub-grubby snack features savory pork sausage wrapped around a hard-boiled egg, encased within a pasty. Though the temperature takes a little getting used to, the absence of any pork jelly is a definite plus. And adding just a bit of mustard gave it a deliciously vinegary pop.

According to Burgess, most of the folks who walk through his door walk out with either a traditional beef pasty or a chicken masala version in hand. Others tend to seek out regional delicacies (Philly cheesesteak, pulled pork barbecue, Bobotie pies — a South-African-style medley, Puttanesca). And he’s all about serving up seasonal goodies — think Jaeger Schnitzel pasties for Oktoberfest, and ratatouille pies later this fall — as often as possible.

So many mouthwatering options. And only two hands to accommodate further exploration.

Guess we’ll have to make more frequent trips. Meet you there, Nick.

CQ Roll Call dining guru Warren Rojas will stop at nothing to track down your regional specialty/state dish/hometown favorite. Put him on the case by nominating your most sorely missed meals to gastrohunt@cqrollcall.com. The Pure Pasty Co.: 128-C Church St., Vienna; 703-255-7147; purepasty.com

Average entree: less than 12 ($). Open for breakfast, lunch and dinner Tuesday through Sunday.