Updated 7:21 p.m. |  In between Israeli Prime Minister Benjamin Netanyahu's address to Congress and Netanyahu's meeting with Senate leaders, Majority Leader Mitch McConnell announced plans to move full speed ahead with legislation to give Congress a say in any potential nuclear deal with Iran.

Foreign Relations Chairman Bob Corker, R-Tenn., announced the details of a bipartisan bill Feb. 27 that would require the Obama administration to transmit any agreement from the international P5+1 talks to Capitol Hill for a 60-day review period. The White House has repeatedly threatened to veto new sanctions  on Iran, and Tuesday's plan to push the bill to the floor was in doubt just hours later as Democratic supporters — who seemed to be caught off guard by McConnell's move — expressed concerns about timing.

McConnell had no such qualms.

"This bill will ripen by next week. It will be on the floor of the Senate for debate next week. We think the timing is important. We think it will help prevent the administration from entering into a bad deal," McConnell said Tuesday. "But if they do, it will provide an opportunity to weigh in, as Sen. Corker will point out, which has almost always been the case in the past on these kinds of agreements." 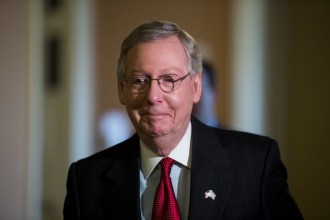 McConnell, R-Ky., walks to the Senate floor to lead the procession of senators to the House floor for Netanyahu's speech. (Bill Clark/CQ Roll Call)

Six Democratic caucus members have signed onto the legislation introduced by Corker, a number which carries significance with the current organization of the Senate, since those six, added to the 54 Republicans in the chamber, provides the crucial 60 votes needed to overcome procedural hurdles and filibusters.

But it was immediately in doubt if the Democrats who back the bill would support moving ahead so expeditiously.

"As a co-sponsor of this important bipartisan bill, I believe the effort by the Republican leadership to force the bill to the floor prior to full committee consideration is contrary to the important interests at stake. Premature action also disrespects the ongoing work to build a broad coalition of colleagues in support of this bill. Congress should weigh in on any Iranian nuclear deal that impacts the statutory sanctions we've enacted," supporter Tim Kaine, D-Va., said in a statement. "But we need to demonstrate that our review will be thoughtful and deliberate rather than rushed and partisan."

If the chamber does move ahead on Corker's bill, it might reduce the likelihood of a vote on conditionally enhancing sanctions against Iran.

However, as Foreign Relations ranking member Robert Menendez — the lead Democrat on the sanctions bill with Sen. Mark S. Kirk, R-Ill. — has previously said, he and nine of his Democratic colleagues would oppose moving ahead with new sanctions ahead of March 24 .

Menendez came to the floor late Tuesday to criticize McConnell for the procedural maneuvering.

“Frankly, this is not what was intended and it certainly is against my better judgment, against procedure, against any understanding we might have had to take the politics out of our effort to establish Congressional oversight of any nuclear agreement with Iran," Menendez said. “I am more than disappointed. I’m outraged."

Corker said the Iranian talks are too important for Congress to ignore.

"I think all of you know we've been working for sometime on a way for Congress to weigh in on one of the biggest foreign policy issues that most of will deal with ... while we're here," Corker said.

Corker said the Foreign Relations panel was planning a hearing on the issue to take place somewhat concurrently with the measure getting to the floor. A Democratic aide pointed out McConnell is technically bypassing the committee in bringing the bill to the floor under the provisions of Rule XIV, however.

Minority Leader Harry Reid, D-Nev., was noncommittal when asked if Democrats would allow the bill to even come up for debate.

"We have a number of moving targets. We spent a lot of our caucus talking about those today. Why don't we wait until we see what happens? We have just three weeks left, as I understand, and we should know whether we're going to have a deal with the Iranians," Reid said. "I personally, just am going to wait and see what happens, whether we have a deal, and then look at all the legislation at that time."

Minority Whip Richard J. Durbin of Illinois, the No. 2 on Reid's leadership team, said that while the issue came up for discussion at the Democratic Caucus lunch, the move by McConnell to quickly bring Corker's bill to the floor was "brand new."

Earlier in the day, Durbin told reporters he was "taking a hard look" at the legislation proposed by the Foreign Relations chairman.

"There's no question that the Senate and Congress play a big role in a lot of agreements like treaties," Durbin said. But he added that Congress certainly doesn't have a role in every deal an administration makes and that he thought the Corker legislation was "unusually worded."

Hannah Hess contributed to this report.

Related: Netanyahu Address Lives Up to Controversial Expectations House Votes to Fund Homeland Security Department How an Obscure Rule Could Give Boehner a Way Out of DHS Mess Netanyahu Speech Draws Protests, Increased Security Jocks Blanket Congress Team Bibi Bucks Chamber Rules The 114th: CQ Roll Call's Guide to the New Congress Get breaking news alerts and more from Roll Call in your inbox or on your iPhone.