According to former Sens. Joe Lieberman, I-Conn., and Jon Kyl, R-Ariz., the Democratic and Republican parties are not the same parties they originally joined.

After watching former Secretary of State Hillary Clinton and Sen. Bernard Sanders, I-Vt., debate for the primary, Lieberman says he fears for his party’s future. “Obviously I worry and I got interested in public service and politics when President John F. Kennedy was in office; that’s a long time ago,” he told HOH. “And the Democratic Party that I joined was a party that really believed in America’s global leadership, principled leadership. In other words, we’re all about the spread of freedom.”

Specifically mentioning Sanders, he said the party he sees in the presidential debates “has moved left on domestic political issues and economic issues.”

Kyl said the president who catalyzed his conservative political views was President Ronald Reagan, who he said helped set a bipartisan consensus for future generations. “At the time that [Reagan] became the leader of the conservative moment in the country, I think that there was a very strong consensus, not just among conservatives or the Republican Party, but a lot of Americans, that a strong free market, the values of America and a strong national security policy were the three key elements of the national government,” he said.

He said this consensus held through the presidencies of Bill Clinton and George W. Bush but has not survived the last eight years.

“[The consensus that] had gradually eroded, to be fair, among Democrats first, is no longer. Republicans pay lip service to it but I don’t think they pay enough attention substantially to it as they should,” Kyl added.

The former GOP whip said that at the time, the difference between Kennedy and Reagan would have been “this much,” indicating a small amount with his fingers. Lieberman seconded that it would have been small.

“An isolationist trend had taken hold and we agreed that we would like to try and do something about that after we left the Senate,” Kyl said.

The two worked on a report with about 50 other people, which was released at the end of December. The George W. Bush Institute featured it in the first edition of its new non-partisan, digital publication, The Catalyst. On Wednesday night, the Institute celebrated the report at a launch party for the publication at the Newseum, where the two senators spoke to HOH.

“Sen. Kyl and I wanted to speak to both parties and also say that believing in American leadership really is not a partisan matter and it’s not restricted to people on the left, center or right and I think we did that with that was said here,” Lieberman said of the report. 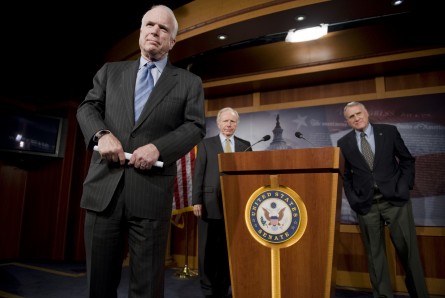 In terms of advice to a presidential candidate now, Lieberman, the Democrats' 2000 vice presidential nominee, said, “I mean obviously, this is so trite but be yourself, don’t be political, say what you think is right. I think we’re at a moment where people who may be unconventional, may seem non-political really, seem to be doing better than people who seem political.”

“I think that not only goes for personality and controversy but that also means that maybe you have a point of view on foreign policy or domestic policy, that will upset some people,” he said. “But I think the American people are ready to be upset, if they think you’re being sincere and really you’re trying to do something that you really believe is good for the country.”

Kyl said countries such as Russia, China, Iran and North Korea, as well as terrorist groups, show the importance of the U.S. as a world leader.

“So in that sense, I think the trend has been in the right direction,” he said. “But, it is also true that a couple of leading candidates have hit a chord with some segment of American populism that is very skeptical about U.S. leadership.”

In looking back on his time in the Senate, Kyl said he misses his old colleagues and being involved in the real-time discussion of events and issues.

Regarding their concern with congressional leadership, Kyl said, laughing, “Without us, they’re sunk.” Lieberman joined in on the joke saying, “It’s all been downhill since we left.”