Sinema and Aaron Schock, R-Ill., say goodbye at the bottom of the House steps after the last vote of the week in the Capitol on Dec. 4, 2014. (Tom Williams/CQ Roll Call)

She doesn’t act like the typical Democrat, either. Sinema's unafraid to criticize the president, voted to repeal portions of the party’s precious health care law and even fraternizes with the enemy: Republicans. The Arizona congresswoman also ditches caucus meetings, most recently skipping the annual issues conference in Philadelphia to go home to Tempe, a bold move for anyone who might want someday to be a player in leadership circles.

“Have you been to my district?” she asked, wide-eyed, when CQ Roll Call asked why she wouldn’t be attending the retreat. “It’s so awesome.”

In fact, when offered the opportunity last year to switch from representing her home state's volatile 9th District to one more reliably Democratic , she declined — a decision which means she's likely to face a formidable Republican opponent every two years (though a newly formed leadership political action committee has spurred rumors she could be eyeing a run for John McCain's Senate seat).

By all accounts, Sinema — Congress' first openly bisexual member, a lawyer and college professor who was once homeless — is one of the least conventional lawmakers on the Hill.

But she has also emerged as one of the most successful members of her 2012 class, winning a second term in a re-election bid that was by no means a given and landing a plum House Democratic Caucus assignment three months ago  as chief deputy whip.

A fellow Arizona Democrat, Rep. Raúl M. Grijalva, recalled meeting an 18-year-old Sinema when she was a member of the ultra-liberal Green Party — a bit of baggage that Republican operatives thought, incorrectly, would haunt and hurt the now-38-year-old centrist's career.

Today, the chairman of the Congressional Progressive Caucus said he, like a lot of members, likes Sinema personally. But don't ask him to explain how she has been able to successfully navigate her environs and become a star among Democrats when her political brand is built largely on bucking leadership and pursuing a more moderate agenda.

“People are more deferential to her, and I don’t know why,” Grijalva said, not unkindly.

Sinema’s colleagues say her nonconformist style is part of a very astute political calculus. Not that it's an act, they say. She just knows where to draw lines and when not to push. And she makes it all look effortless.

“She’s a survivor,” said Democratic Caucus Vice Chairman Joseph Crowley of New York, noting that in regards to her political style, “I think she’s smart about how she does it. I think a lot of people underestimate her.”

Not Minority Whip Steny H. Hoyer. The Maryland Democrat took an interest in Sinema early, eventually choosing her for the whip team.

“She is a fountain of energy. She just never stops. She’s just so focused and so effective and members love her. Even members who disagree with her,” Hoyer told CQ Roll Call. “And the [2012] freshmen all have a great deal of respect for her, and they all really liked her, and that’s one of the reasons why I wanted her to be a chief deputy whip.

“She is, I think, one of the most able members that I’ve seen come to Congress, in my time in Congress,” Hoyer said.

Hoyer, who has a history of taking moderates under his wing, wanted Sinema not to whip for bills she and fellow vulnerable lawmakers couldn’t support, but to be a liaison between leadership and two contingents of which she is a member: the fiscally conservative Blue Dogs and the centrist New Democrats.

Sinema's affection for Hoyer is mutual. “You don’t say 'no' to Steny. ... He’s wonderful,” she said.

As for her approach to whipping votes, she said she would never be “antagonistic” toward members who aren't on board.

“It’s not my style,” she said. “My role is to help members clearly understand that their No. 1 priority is to their constituents and to their district. And if there’s an opportunity for that priority to line up with the caucus priority, that’s wonderful. And if it doesn’t, they should feel comfortable doing what’s right for them. … So I get to tell Steny and his team, ‘Here’s where people are, here’s what people are thinking.’ 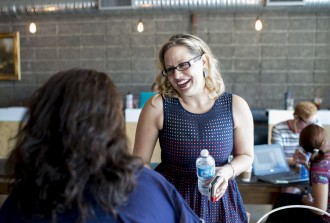 “I think it’s a great role for me,” Sinema said. “It’s just who I am. Someone who works with both sides of the aisle and understands nuance, so actually, I love my job. It’s a wonderful job.”

Sinema has a reputation for being unafraid to wander over to the “Republican side” of the chamber floor to chat, offer a hug or confirm a social engagement (Illinois Republican Adam Kinzinger called her “a social butterfly”). She takes pride in her ability to relate to others despite political, personal and cultural differences.

“A couple years ago, we were at a restaurant, and a member saw me having dinner with some Republicans — it was a bipartisan dinner I organize every couple of months with some friends of mine from the other side of the aisle,” Sinema recalled. “And on the way to the bathroom, she stopped me, and she said, ‘Why are you having dinner with those people?’ And I said, ‘Well, those are my friends.’ And she looked at me, and I said, ‘Yeah, we’re just friends. Regardless of politics, we’re friends.’”

“No, I don’t really fight,” she said. “Not really. I just feel like you catch a lot more flies with honey than you do with vinegar. ... What I do try to do is listen and understand.”

Building bridges is a key component, she said, of her political philosophy in both Washington, which she described as “disconnected from people’s lives,” and her hometown, filled with “real people.”

She said she wouldn’t opine as to why her party did so poorly in the 2014 midterms — “I try really hard never to predict or to pretend to know what other folks are thinking, because that’s when you look dumb” — but explained what went well for her.

“I’ve focused almost exclusively on a couple of key issues in my district: Taking care of veterans and growing jobs in my district and standing up for women and their families and, frankly, standing up for Arizona," said Sinema, who was in early on the Veterans’ Affairs Department controversy last year and one of the administration’s most vocal critics.

"Sometimes the Southwest is forgotten here in Washington," she said.

“I tried really hard to avoid partisan fights, and I felt like I succeeded in that,” Sinema continued. “One of the things we say at home is, ‘I’m willing to work with anyone to get things done.' Anyone. I don’t care who that person is. We may not agree on 99 issues, but if there is one issue I’ll work with them to get something done.” 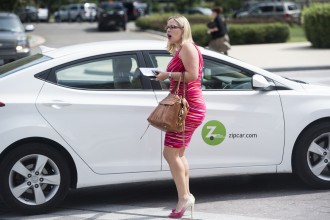 That sunny disposition and determination to build alliances could be what keeps her from completely alienating Democrats who wish she and some of her other 2012 “frontline” classmates were better team players.

Nearly a dozen of them frequently vote with Republicans on legislation that most Democrats would describe as “gimmicks,” such as GOP-touted “jobs bills” that set higher bars for new federal regulations.

“She, and a lot of us, came because we saw the institution needed changing, and that’s uncomfortable for a lot of people,” said Rep. Scott Peters, D-Calif., a fellow frontliner and 2012 classmate who just barely won re-election.

“I’m just doing my thing,” she said. “I know my thing’s a little bit different than other people, but I don’t think there’s anything wrong with that at all. And, you know what? I don’t mind if someone people like it or don’t like it. That’s OK.

Related: Sinema Plays Coy on McCain Challenge Arizona Congresswoman Moves to the Middle The 114th: CQ Roll Call’s Guide to the New Congress Get breaking news alerts and more from Roll Call in your inbox or on your iPhone.