Congressional Bookworms Open Up to C-SPAN

Prefer your C-SPAN coverage a little less combative than vitriolic one-minutes or partisan committee hearings? Then tune that dial over to Book TV’s “Summer Reading” series, a literary love-fest that’s got lawmakers gushing about their favorite page-turners. 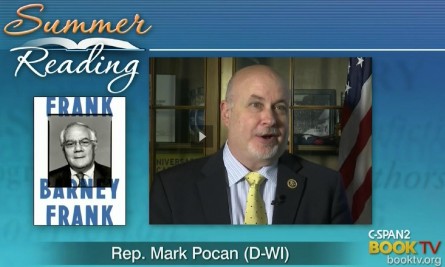 Senior Executive Producer Peter Slen told HOH the quick-hit segments — all prompted by the interrogatory softball, “What are you reading this summer?” — used to focus on Washingtonians from all walks of life. But the team decided to bear down on elected officials this year, and has, to his delight, received an enthusiastic response.

“It’s been difficult, time-consuming and effective,” Slen said of the dozens of interviews conducted with pols on both sides of the aisle. Per Slen, Team C-SPAN typically arranges one-on-one chats in private offices with those most eager to chat about the must-reads that have been occupying their free time. He’s opening up the process Wednesday by camping out from noon to 3 p.m. in Statuary Hall in the hopes of catching up with additional folks.

Some of the more ravenous bibliophiles ticked off some of what they've recently digested:

Sen. Dan Coats , R-Ind., who said he’s got different reading material reserved for each facet (home, D.C. or traveling) of his transient lifestyle:

Next up for Coats? “The Boys in the Boat,” “Dead Wake” and “World Gone By” by Dennis Lehane. “I try to work in a murder mystery,” he said .

Senate Majority Leader Mitch McConnell , R-Ky., who demonstrated a super wonky list he is poring over:

“We’d love to get 535 of them,” Slen said of his desire to pick every congressman’s brain for novel suggestions.