Charlie Gonzalez Determined to Save Congress From Itself

On the one hand, former Rep. Charlie Gonzalez is delighted his generation has helped usher in an era in which gay marriage — he presided over one such union just a few months back — is now the law of the land.

Too bad some of his contemporaries, he maintains, also orchestrated the devolution of politics into bloodsport.

“Newt Gingrich introduced into the legislative process something that wasn’t very healthy: making things so incredibly personal,” the retired Texas Democrat told Roll Call of the win-at-any-cost mentality he perceives as directly responsible for the hyper-partisanship that’s reduced Congress to a rhetorical cage match.  The seven-term lawmaker joined the legislative branch in 1998, stepping onto the national stage to take a shot at replacing his father, Rep. Henry B. Gonzalez, once the nearly 40-year House veteran opted to call it quits. Following a career in private practice and time spent on the bench as a district judge, the younger Gonzalez devoted his tenure on Capitol Hill to combating perceived injustices both in committee (he served on the Judiciary and House Administration panels) and on the floor. 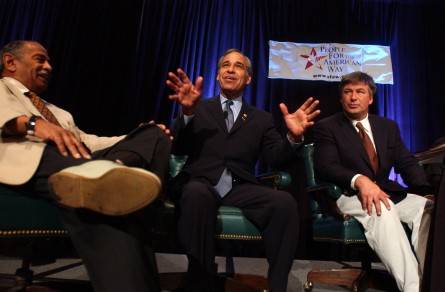 Gonzalez and Rep. John Conyers, left, participate in a discussion on the future of the Supreme Court with actor Alec Baldwin during the 2004 Democratic National Convention in Boston. (CQ Roll Call File Photo)

His passion for LGBT rights is well documented.

In 2004 he voted against a GOP push to constitutionally ban same-sex marriages; in 2007 he opposed a proposal that would have allowed employers to discriminate against applicants based on sexual orientation; and in 2010 he voted to repeal the military’s “Don’t Ask Don’t Tell” policy.

“I still believe it really is about human rights,” Gonzalez said of his zeal for gender equality.

“I don’t do very many [weddings], but this was an exceptional event,” he said of his presiding over the civil union of long-term couple Vic Holmes and Mark Phariss.

Given that he’s known Phariss for decades — “He was a young lawyer when I was a judge,” he explained — Gonzalez said it was his honor to help the two become one after so many years of having government hamper their personal lives.

“It brought me great joy,” he shared. “But you can’t undo all the pain and suffering that others have evoked.”

Still, Gonzalez deeply appreciates the 180-degree change in the treatment of lesbian, gay, bisexual and transgender individuals that’s transpired throughout his lifetime. “The fact that we respect the feelings and emotions and lives of everyone is incredibly important,” he said of the dramatic shift in public thinking that has unfolded since his youth.

Gonzalez heaped praise on the high court for theoretically putting an end to all the back-and-forth on gay marriage — particularly since lawmakers seemed incapable of effectively putting the issue to bed.

And now that that’s been resolved, he would love for progressives to refocus their energies on neutralizing the highly divisive Citizens United ruling.

“People need to be trying that because it does cast a light on a tremendously important issue,” Gonzalez said of the landmark decision that turbocharged spending on political campaigns.

Fending off outside influences, he suggested, is certainly challenging.

But it’s no harder than overcoming the blatant gamesmanship that now dictates virtually every move on Capitol Hill.

“It’s all about politics, not policy. And it results in the gridlock we see today,” Gonzalez asserted.

He blamed Gingrich for wreaking havoc on the American political system by:

“Seize the opportunity, no matter what damage is done to the body politic,” is how Gonzalez characterized the “Contract with America” architect’s modus operandi.

Per Gonzalez, the GOP wave of 2010 fully realized Gingrich’s endgame. 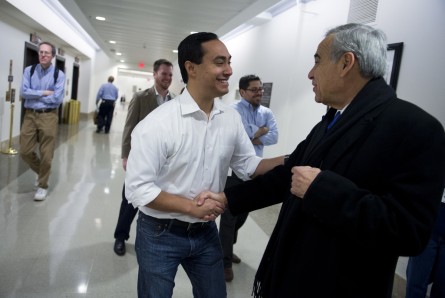 “You felt it. You saw it. People just weren’t going to be talking anymore,” he said of the anti-establishment tone that washed over Washington, effectively rendering compromise verboten.

Which is why restoring the fractured body to some semblance of functionality is of paramount importance to Gonzalez.

Picking up the pieces, he has since concluded, will require a team effort.

Hence the reason Gonzalez has signed on to work with a slew of prospective problem solvers, a roster that includes:

“I’m not giving up hope,” Gonzalez said of his mission to get Congress back on track. “It’s just pretty difficult to get people involved once they see what’s going on in Washington.”