Darryl Sharp, 54, allegedly entered the Louisiana Republican's office around 2 p.m. on Aug. 19. He yelled at staff, demanded paperwork and claimed to be with the Secret Service, according to a person familiar with the incident. Scalise's staff called Capitol Police. 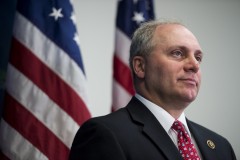 All attempts to confirm Sharp's claim of employment "were met with negative results," according to an arrest report. He was charged with one count of false personification of a police officer.

Scalise's spokesman referred all questions about the incident to Capitol Police.