“This is the community that I love, that I call home, and at the conclusion of my current term in office, I will be coming home. I will not seek re-election," Miller announced in a video posted to Facebook .

First elected to Congress in 2002, Miller is one of 22 women in the House GOP conference. Her district includes the eastern part of Michigan that borders Canada on land and water. 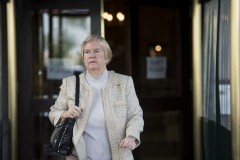 In 2012, Miller became the chairwoman of the House Administration Committee, making her the unofficial "Mayor of Capitol Hill." The committee has jurisdiction over election changes, daily House operations and oversight over legislative branch agencies and Capitol security.

Her retirement marks the latest long-serving, influential member of the Michigan delegation to leave Congress.

A number of Republicans could look to run for her seat, according to Michigan political operatives, who said a crowded race is likely. The list of potential candidates includes:

But Democrats mentioned a handful of pols who could run. They are:

With her announcement, Miller, 60, is the third House member to announce retirement this cycle without seeking another office. For a full list of retirements, check Roll Call's Casualty List .

Bridget Bowman contributed to this report. The 114th: CQ Roll Call's Guide to the New Congress Get breaking news alerts and more from Roll Call in your inbox or on your iPhone.