Have a Ball With DC Vote

Disenfranchised District denizens who dare to dream of one day having a say in how Congress handles its business can once again raise their voices in unison during DC Vote’s 3 Star Ball.

The fledgling fundraiser is scheduled to bring together advocates for home rule on the rooftop of the National Association of Realtors Building (500 New Jersey Ave. NW) Wednesday from 6:30 to 9 p.m.

Newly minted host committee member Spike Mendelsohn is slated to handle the refreshments; organizers indicated his catering arm, Spike’d , has been tasked with plying partygoers with passed hors d’oeuvres. An open bar is expected to tend to the needs of the absolutely parched. 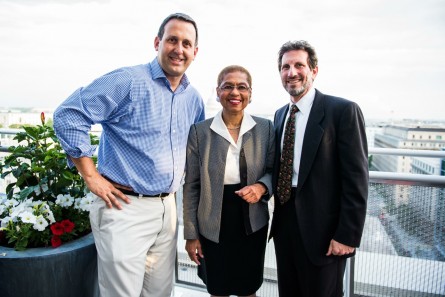 Those hoping to cheer on hometown heroes — other than D.C.’s symbolic congressional delegation, of course — will have the opportunity to pay their respects to DC United Head Coach Ben Olsen. According to event aides, the former Major League Soccer all-star will be feted for his “dedication to fulfilling the promise of democracy.”

Tickets to the equality-themed shindig start at $75 per person.