Ahead of Obamacare Repeal Rollout, Walker Stocks Up On Advisers Familiar With Capitol Hill

As Republican presidential candidate Scott Walker sets out to unveil his proposal to replace Obamacare, he's been staffing up from Capitol Hill.

The Wisconsin governor has brought on Andrew Shaw as domestic policy director, the campaign told CQ Roll Call. Shaw has worked since January as the policy director of the conservative Republican Study Committee in the House, where he was involved in efforts by Chairman Bill Flores, R-Texas, and the RSC members to repeal the 2010 health care overhaul law.

Shaw's experience on the Hill includes time as legislative director for conservative Republican Rep. Scott Garrett of New Jersey, as well as a legislative assistant to then-Sen. John Ensign, R-Nev., and in positions at the nonpartisan Congressional Budget Office.

After appearing at the Iowa State Fair Monday, Walker is set to detail his health care proposal Tuesday at a screw machine products company in the Minneapolis-St. Paul suburbs. 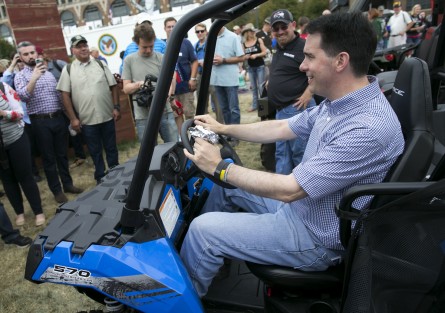 Walker sits in an ATV while touring the midway at the Iowa State Fair on Monday. (Al Drago/CQ Roll Call)

What he says should be largely familiar to those familiar with efforts by congressional Republicans to craft replacements for Obamacare. An outline obtained by CQ Roll Call shows the plan features turning much of the power over Medicaid decisions to state governments.

But it says it would maintain tax credits for those who do not get employer-provided health care, a provision allowing health insurance to be purchased across state lines and expanded health savings accounts.

The plan would address pre-existing condition exclusions through "incentives rather than penalties," saying it would prevent premiums from sky-rocketing for people moving between insurance providers, if the coverage was continuous. But, Walker also envisions reviving state high-risk pools and repealing federal mandates on minimum coverage.

Walker's proposal is detailed, but without the minutiae required for legislative language. The Minnesota speech comes one day after Florida Sen. Marco Rubio, another 2016 Republican presidential candidate, offered his own views for overhauling health care in a Politico opinion piece .

"We must move Medicaid into a per-capita block grant system, preserving funding for its recipients while freeing states from Washington mandates. While current seniors on Medicare, like my mother, should see no changes to the program, future generations should be transitioned into a premium support system," wrote Rubio. "A premium support model will empower seniors with choice and market competition just like Medicare Advantage and Medicare Part D already do."

Rubio had a previous health policy op-ed about life after Obamacare back in March, published by the Fox News website .

The Walker campaign told CQ Roll Call that Scott Gottlieb of the American Enterprise Institute, a well-known physician for his role in health policy debates on the conservative side, had signed on as a senior adviser. Gottlieb had earlier in his career been deputy commissioner at the Food and Drug Administration and a senior adviser at the Centers for Medicare and Medicaid Services.

Shaw and Gottlieb have followed Policy Director Andrew Bremberg in joining Walker's team. Bremberg, who had been a leadership aide to Senate Majority Leader Mitch McConnell of Kentucky, signed on to Walker's Our American Revival (the predecessor to his formal presidential campaign shop) in May, as Politico had reported .