A True Outpouring of Support for #PopeinDC

Ashley Williams, a server at Brookland Pint, sports apropos gear in anticipation of Pope Francis’ visit to the Basilica of the National Shrine of the Immaculate Conception. (Warren Rojas/CQ Roll Call)

Those hoping to catch even a fleeting glimpse of Pope Francis began congregating outside the White House and along the National Mall Wednesday before the sun was even out, trudging through the last vestiges of inky darkness to secure the best possible spots from which to gaze upon His Holiness. 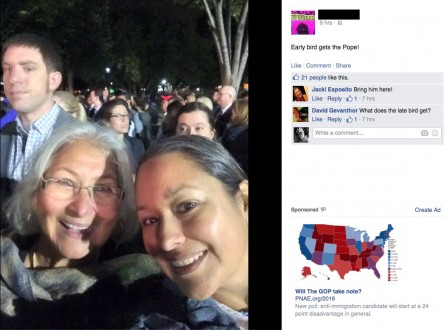 While crisscrossing the District, HOH happened upon religious figures aplenty. We spotted casually dressed priests hightailing to the Basilica of the National Shrine of the Immaculate Conception. 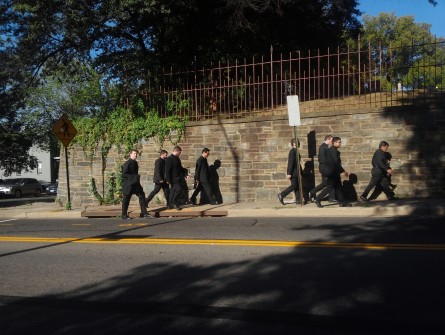 There were folks in colorful cassocks flocking to the Cathedral of St. Matthew the Apostle.

And, of course, the destined-to-go-viral nuns awaiting their own personal Super Bowl.

Nun's tailgating for the Pope is the greatest thing I will ever see pic.twitter.com/huAt62uakn