2016 Presidential Contenders Could Clean Up at Comic-Con

Nothing against the fine people of Iowa, New Hampshire and the handful of other electoral proving grounds aspiring commanders in chief crisscross for months on end leading up to Election Day, but pols are doing themselves a serious disservice by not pressing the flesh at Comic-Con International  in San Diego. 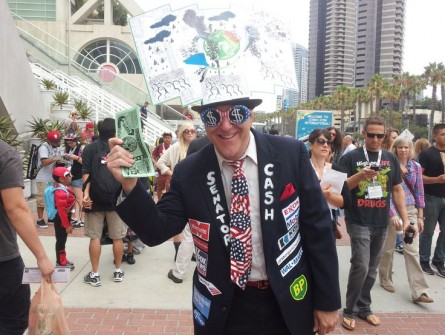 Sure, pop culture can prove problematic for the socially awkward.

But the breathtaking number of fanboy-stoking panels and geek grrl-courting exhibitions virtually guarantees even the lamest lawmaker should be able to tap into some hero-seeking constituency.

Which is why HOH is putting out this FOMO alert to all myopic campaign managers.

SDCC Events Worth Crashing: Hillary Rodham Clinton – Women Who Kick Ass The multi-hyphenate politician (former FLOTUS, senator and secretary of State) has made a career out of pushing boundaries and challenging gender roles. Chatting up the leading ladies of adventure/horror/science fiction ought to be infinitely more stimulating than trading barbs with your average House Republican committee chairman or shouting down conservative pundits. Plus, it couldn’t hurt to pick up the endorsement of the next Wonder Woman, or perhaps probe a time-traveling companion about the outcome of the next election.

Sen. Ted Cruz – The Simpsons The longest running sitcom in television history will treat fans to a sneak preview of Season 27. But with only one of the renowned cast mates (Nancy Cartwright) scheduled to attend, the Texas Republican may have a chance to redeem himself for the awful impressions he performed at BuzzFeed’s request.