Harry Reid may have masterminded one of 2016’s biggest statewide Democratic sweeps as he headed toward retirement, but the Nevada congressional delegation he left behind has lost much of its legislative leverage as a result.

In fact, only two delegations have less collective influence at the Capitol this year than the six lawmakers from the Silver State, the newest Roll Call Clout Index reveals.

That makes Nevada the biggest underperformer in the 115th Congress, as measured by the difference between its institutionalized sway on Capitol Hill (tied for 47th) and its ranking among the states in population (34th, with 2.9 million residents as of last summer). Just two years ago, when Reid was finishing a decade as the Senate Democratic floor leader, the state’s spot on the 2015 Clout Index and its position on the population table were virtually the same.

Nevada’s dramatically quick loss of stature illustrates how — especially among the smaller states — formalized power on the Hill can rise or fall significantly when a state gains or loses premier positions of influence, veteran lawmakers choose to stick around or depart, and elections change a delegation so it aligns with, or gets disconnected from, the Capitol balance of power. 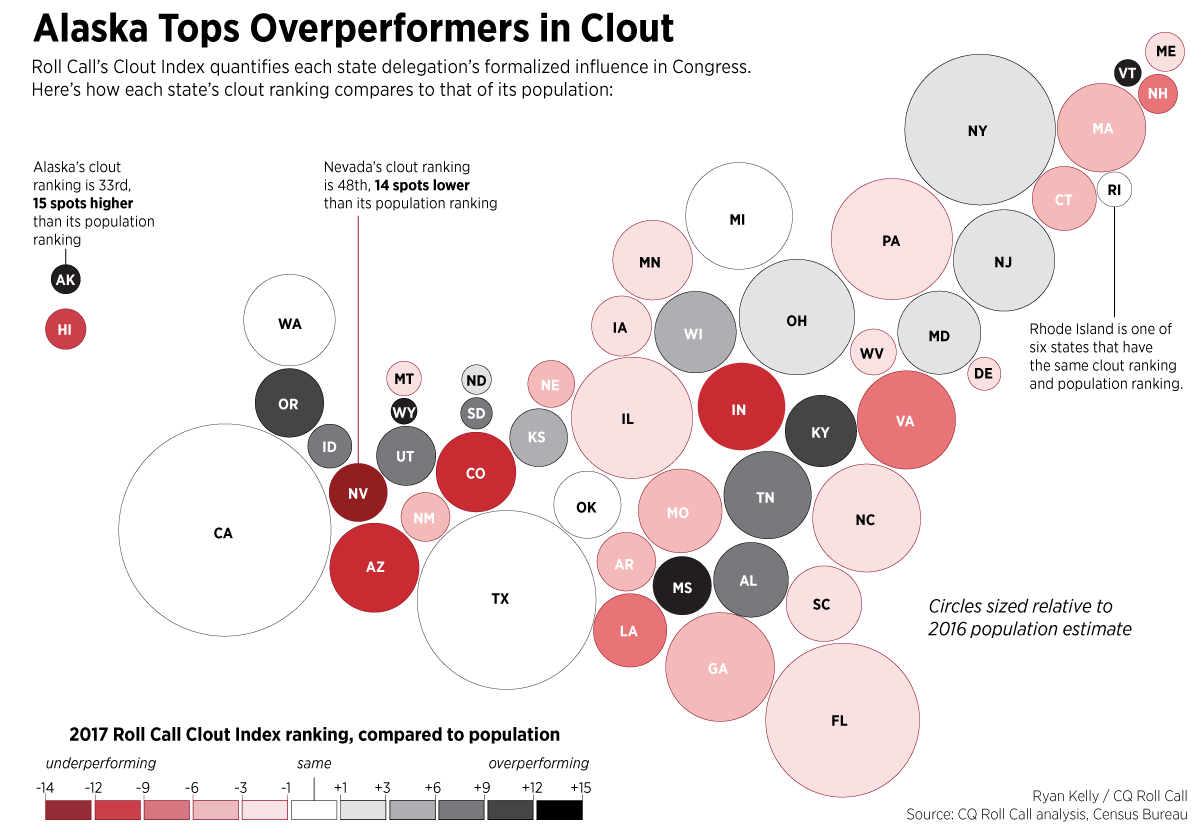 In the main, the biggest delegations from the biggest states tend to have clout commensurate with their size. As reported last week, all but one (Virginia) of the 12 most populous states finished in the top dozen on the 2017 Clout Index.

And for every smaller state freshly relegated to punching below its weight, there is one that can newly boast about overperformance.

Idaho, for example, shot up five places to No. 30, or nine notches ahead of where its 1.7 million people are in the population ranking, principally because in January, both its Republican senators were rewarded for their seniority with new committee gavels, Michael D. Crapo at Banking and Jim Risch at Small Business and Entrepreneurship.

Total membership, collective tenure, majority-party representation, partisan leadership assignments, top positions on committees and membership on the most influential panels are what Roll Call has used to gauge each delegation’s clout since 1990. So the score for Idaho, for instance, does not take into account the less-than-quantifiable influence exerted by Rep. Raúl R. Labrador as a spokesman for the combative conservatives in the House Freedom Caucus.

For Nevada, the huge plummet in sway came about because Reid, after deciding against seeking a sixth term, instead put his vaunted political machine to work, trying to elect as many Democrats as possible across Nevada. The partisan payoff was enormous. Not only did the senator’s handpicked successor, Catherine Cortez Masto, get swept into office, thanks to the huge Hispanic turnout Reid’s team helped produce, but Democrats also took two of the state’s four House seats from the GOP and won control of both halves of the state legislature.

The downside is the Hill delegation lost more than the benefits of Reid’s enormous individual power. It also shed four decades of collective seniority and shifted from being mostly majority Republican to mostly minority Democratic, with no chairmen and just one premier panel member: Mark Amodei, who’s a lowly 23rd in Republican seniority on House Appropriations.

Indiana may have produced plenty of new executive branch clout in the form of Vice President Mike Pence, but its legislative stroke has weakened considerably since Dan Coats left the Senate with 18 years’ seniority and, in trying to succeed him, a pair of fellow Republicans (Todd Young, the winner, and Marlin Stutzman) had to trade away plenty of House tenure and good committee assignments.

The Hoosier delegation’s clout now ranks 27th, or 10 notches below the state’s population position. Three other states are underachieving to a similarly significant degree.

The gap between Colorado’s clout (32nd) and its population (21st) is understood by realizing that, while the delegation has a 5-4 Republican edge, no member from the GOP majority is assigned to a premier panel, only one from either party (Democratic Rep. Diana DeGette) has been in office longer than a decade and the only one with a chairmanship is Cory Gardner — at the Senate GOP’s 2018 campaign committee.

The challenges are similar for Arizona, which has soared to 14th in population (6.9 million and growing) but has a middle-of-the-road clout ranking of 24th. Being among the most outspoken Republican critics of President Donald Trump affords a special sort of influence to both senators, John McCain and Jeff Flake. But the state’s only chairmanship belongs to McCain at Senate Armed Services, five of the nine House members have been in office less than 50 months, and only a single Arizonan (Rep. David Schweikert, newly assigned to Ways and Means) sits on a committee with top-flight policymaking jurisdiction.

Although 40th in population, Hawaii brings up the rear of the Clout Index this year just as it did for the 114th Congress — principally the result of the all-Democratic delegation of four people undergoing a total changeover, and then some, in the past five years. Brian Schatz, a Senate appropriator, is the only one on a premier committee.

Thanks to high levels of delegation turnover and a few Democratic gains,  Virginia, Louisiana and New Hampshire are the other states with the biggest disparities (eight or nine notches) between their populations and their more modest clout.

Conversely, modestly populated Republican strongholds dominate the roster of states with lawmakers positioned to deliver the goods at levels disproportionately better than their number of constituents.

Alaska has been the biggest overperformer, almost without exception, in Clout Indexes going back more than two decades. This year is no exception. It may have dipped to 48th in population but its three GOP lawmakers combine for 33rd in influence — mainly because, during her 15th year as a senator, Lisa Murkowski is chairwoman of both the Senate Energy and Natural Resources Committee and the Interior Appropriations Subcommittee.

Mostly because their senators are well-positioned, four other states this year have Clout Index positions 10 or more spots ahead of their population rankings.

Wyoming is the nation’s least populous state, with 586,000 people, but it stands 37th in clout mainly because both its Republican senators wield gavels at major committees, Michael B. Enzi in his second term at Budget and John Barrasso newly installed at Environment and Public Works, and Barrasso also has a seat at the leadership table as chairman of the Senate GOP’s policy committee.

Mississippi (No. 32 in population, No. 19 in clout) is an overperformer because its GOP senators, Thad Cochran and Roger Wicker, have a combined 66 years of congressional experience; because Cochran is chairman of not only the Appropriations Committee but also its Defense Subcommittee; and because the House delegation of just four includes the House Administration chairman (Gregg Harper), an Energy and Commerce member (also Harper), a GOP appropriator (Steven M. Palazzo) and the top Democrat on Homeland Security (Bennie Thompson).

Kentucky (No. 26 in people) has more than Senate Majority Leader Mitch McConnell to thank for being No. 15 in sway. Three of the five GOP House members have prestige committee postings, including Harold Rogers as chairman of the Appropriations subcommittee directing foreign aid. And the only Democrat in the delegation, John Yarmuth, has the party’s top seat on House Budget.

Vermont is an exception here, because its clout (No. 36) significantly outdistances its population (No. 49) even though all three lawmakers align with the Democrats. But both senators (with 68 years in Congress between them) are ranking members on important committees, Bernie Sanders at Budget and Patrick J. Leahy at Appropriations; and after a decade as the state’s lone House member, Peter Welch is a senior member of Energy and Commerce.

Neighboring Massachusetts (15th in population) is the biggest state with nothing but Democrats in Congress (11 of them), but it nonetheless managed to advance in the influence rankings more than any other state this year — up eight spots, to No. 20, thanks mainly to Rep. Richard E. Neal’s ascent to his party’s top slot on Ways and Means and Katherine M. Clark’s posting to Appropriations. It still has a long way to go, however, before returning to the roster of overperforming delegations, where it was for so much of American history, with a Top 10 performance as recently as six years ago.

In contrast, neighboring Rhode Island is one of the right midsize or small states with spots on the Roll Call Clout Index that are no more than two places away from their population rank. The others are Washington, Oklahoma, Montana, North Dakota, Iowa, West Virginia and Delaware.