Current number of House members retiring is far below average

A large crop of House members are likely to retire in the coming months, not necessarily because President Donald Trump is polarizing, the parties are divided, or Capitol Hill is “dysfunctional” — but because 40 years of history tell us it’s going to happen.

Since 1976, 22 House members, on average, have retired each cycle without seeking another office. Thus far this cycle, just five members fit that description: Republicans John J. Duncan Jr. of Tennessee, Lynn Jenkins of Kansas, Sam Johnson of Texas, and Ileana Ros-Lehtinen of Florida, and Democrat Niki Tsongas of Massachusetts.

A full 17 members could announce their decision to walk away from Congress and elected office and the cycle could be described as an average occurrence. Of course, that’s not the narrative that’s likely to build. 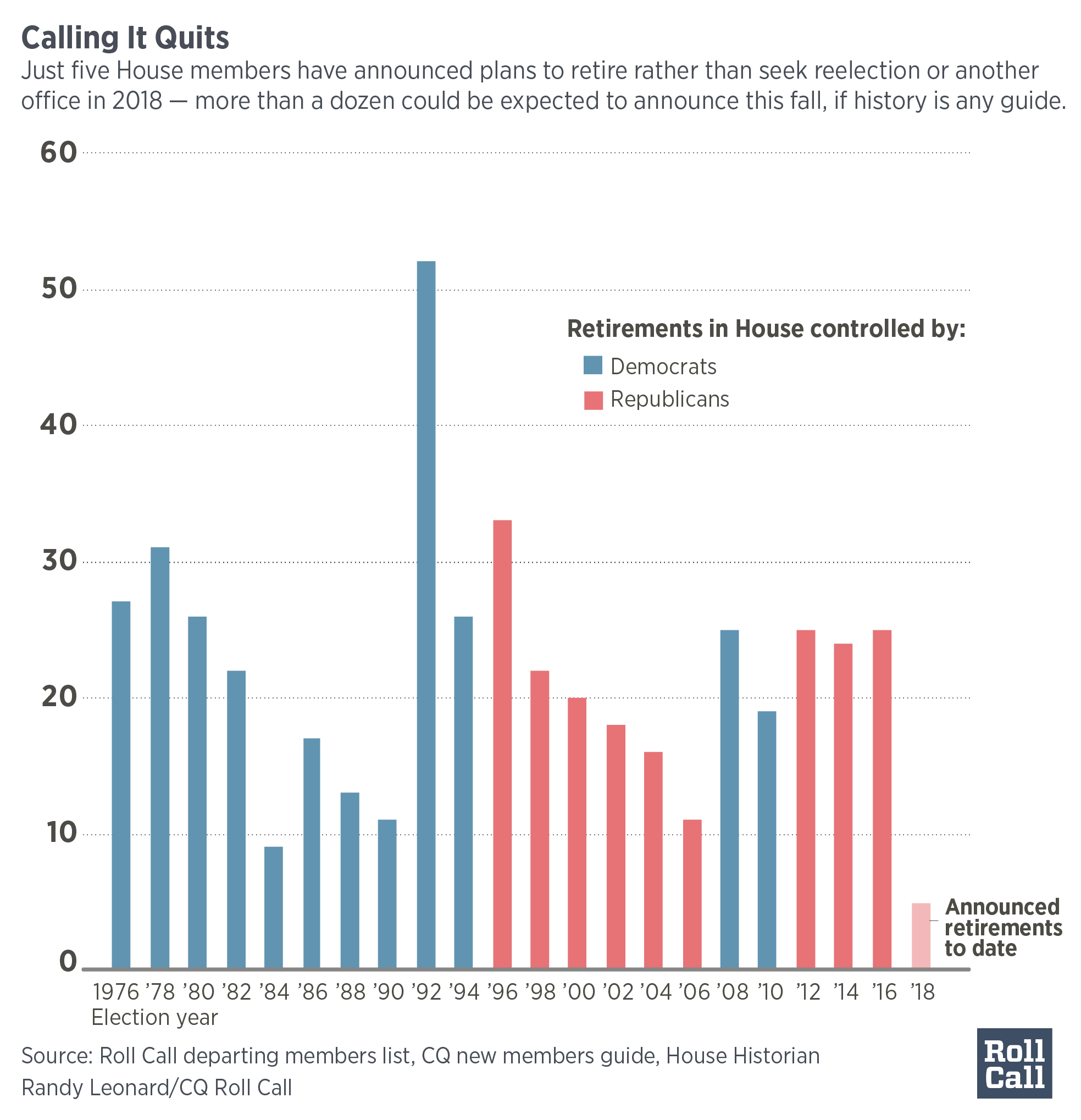 If a batch of members announce their retirement, particularly Republicans, much of the media will almost certainly blame Trump, or the infighting within the GOP. Of course, retirement decisions aren’t made in a vacuum and it’s tough to isolate individual circumstances. But the historical context will likely be lost and the psychological impact of one of their colleagues being shot and nearly killed in broad daylight can’t be dismissed.

Open seats, including retirements, are critical in shaping the House battleground. Ros-Lehtinen’s departure took her 27th District from Solid Republican to Leans Democratic, considering Hillary Clinton won the south Florida seat by nearly 20 points, according to calculations by Daily Kos Elections. If Ros-Lehtinen had decided to run for re-election, it would not have been a top Democratic target.

Democrats could benefit from more Republican retirements in competitive districts to decrease the number of well-funded and established incumbents they must defeat to gain the 24 seats necessary for a majority. They also must limit competitive open seats of their own, such as Minnesota’s 1st District, which Trump won by 15 points and Rep. Tim Walz is leaving to run for governor. If Democrats lose Walz’s seat and win Florida’s 27th, they haven’t put a dent in the GOP majority.

You can see the Inside Elections ratings for every race in Roll Call’s Election Guide and get updated analysis on over 100 districts in the new Sept. 1 House Overview issue from Inside Elections.