It's been five years since former Rep. Gabrielle Giffords, D-Ariz., was shot at a Safeway in her district, a mass shooting that injured 12 others and killed six at a "Congress on Your Corner" event in Casas Adobes near Tucson.

To mark the anniversary, Giffords was in Washington this week. On Thursday, she attended President Barack Obama's town hall on guns on CNN , and on Friday was at the D.C. headquarters for Americans for Responsible Solutions, the advocacy group she and husband Mark Kelly founded after the shooting, to meet with some of her former congressional staffers and friends. She also wrote an opinion piece for The Washington Post about her experience, her recovery and the issue that has animated her since: gun control.

"Today, five years after I was shot, we are making progress. While Congress refuses to act, many state leaders are embracing common-sense change that keeps guns out of the wrong hands," she wrote. "This week, we made even more progress when President Obama announced that his administration will significantly narrow the loopholes that let people buy guns without a background check. It is the right, responsible thing to do."

The shooting marked one of the most brazen acts of violence against a sitting member of Congress since Nov. 18, 1978, when Rep. Leo J. Ryan, D-Calif., was killed in Guyana, South America . Rep. Jackie Speier, D-Calif., who was an aide for Ryan at the time, was shot also but survived. She later won his seat and serves in Congress to this day.

One of Giffords' aides, community outreach director Gabe Zimmerman , was among those slain in the 2011 Tucson attack. Congress honored him by naming a Capitol Visitor Center meeting room after him. Another aide, former Rep. Ron Barber, D-Ariz., was injured but went on to succeed Gifford in Congress.

Giffords has been extremely active in the years since, both politically and with her family. As she notes in her op-ed, she's skydived and cycled in 40-mile charity rides. She's hung out with her old congressional pals as well, even throwing out the first pitch at the 2014 Congressional Women's Softball Game. 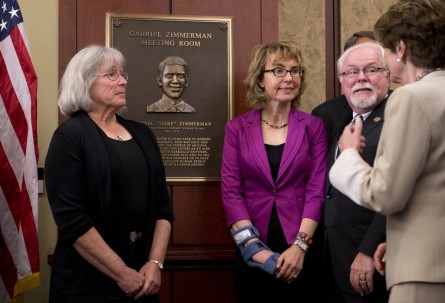 A spokesman for Americans for Responsible Solutions said Giffords and Kelly were going to spend the rest of the day together to mark the occasion, a somber time but one hard to imagine when the congressman was fighting for her life five years ago to the day.

The House marked the occasion by observing a moment of silence on the floor Friday.