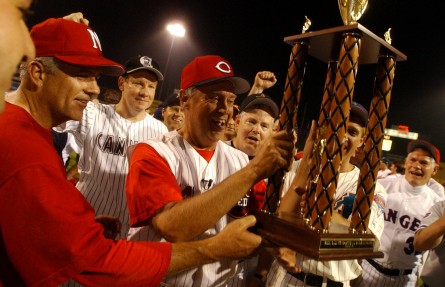 Michael G. Oxley, who brought competitive intensity and joviality to legislating and athleticism during a quarter-century as a House Republican from Ohio, died Thursday night. He was 71 and had been combating lung cancer since soon after leaving the House in 2006 to become a lobbyist. Although his career was distinguished by free-market conservatism, Oxley’s name is forever tied to a law that’s the bane of the accounting and business world, which he helped steer to enactment in 2002 after a series of corporate scandals. He was chairman of the House Financial Services Committee and his legislative partner was the chairman of the companion Senate panel, Maryland Democrat Paul S. Sarbanes. Their work, now widely known as Sarbox or Sox, created stiff new federal rules for bookkeepers and new penalties for C-suite malfeasance. After the collapse of the energy giant Enron, at the time the biggest bankruptcy in U.S. history, Oxley won passage of a legislative response panned by critics as too vague to be effective. It was quickly subsumed by a more assertive Senate measure after another pair of accounting scandals, involving Xerox and the telecommunications giant WorldCom, quickened political momentum for government action. Oxley fought unsuccessfully to limit the scope of the final bill, which at the time was the most sweeping new regulation of publicly traded companies since the Depression, and after leaving office he adopted a damned-with-faint praise approach to his signature accomplishment. “No law is perfect,” he told Fortune magazine in 2012. Wall Street quickly forgave him, and Oxley became one of the banking industry’s most frequently feted lawmakers. (The wave of fundraisers for him at the 2004 GOP convention in New York was so lavish it drew scrutiny from the state attorney general.) While routinely spending more than $1 million told hold his own rural district, he had plenty left over and was one of his era’s most generous contributors to fellow House Republicans. During six years as chairman, the maximum permitted by GOP rules, Oxley was central to writing laws creating the terrorism risk insurance program, combatting money laundering as a means of reducing terrorists' access to cash and reducing federal fees on securities sales. Before taking over Financial Services, he was chairman of a powerful Energy and Commerce subcommittee, where he played a significant role in writing the 1999 law removing the barriers that had separated banks, insurance companies and securities firms since the New Deal. He also helped shepherd one of the two laws  enacted over President Bill Clinton’s veto, insulating companies from securities fraud lawsuits when they distribute erroneous but good-faith profit projections. Before switching committees, Oxley won a bruising power struggle inside the GOP conference that ended with him bringing much of his old jurisdiction with him. (His strong competitive streak, and a drive to do things his way, also routinely left Democrats complaining of being ignored in crafting legislation.) At the same time, Oxley had a reputation as a wisecracker and backslapper with a quick laugh and megawatt smile. He was also an unabashed defender of the “old school” perquisites that came with a seat in Congress, especially travel on the dime of others. He roamed as widely as any member to vacation destinations, raising money on the ski slopes in Colorado and speaking at conferences at golf resorts from Florida to southern California. He was one of the most overt jocks on the Hill, a reputation that followed him from his days sporting a flat-top in high school. He could be found early weekday mornings playing tennis with a lobbyist or basketball in the members’ gym. His golf handicap was among the lowest in Congress. But baseball was the sport for which he was best known in Washington. He manned every position but pitcher and catcher during 16 years on the field for the GOP in what’s now called the CQ Roll Call Congressional Baseball Game -- a playing career that ended after he broke his wrist in the 1994 game in a collision at first base with another Ohio congressman, Democrat Sherrod Brown, who’s now a senator. He had to have steel pins inserted in his arm. But he was back the next year as manager, and during the next eight years the Republicans won seven times. Michael Garver Oxley was born on Feb. 11, 1944, in Findlay, Ohio, which remained his official hometown throughout his public career. His dad, the county prosecutor, ingrained the virtues of Barry Goldwater and free-market economist Milton Friedman in his son from an early age. After earning degrees from Miami University of Ohio and Ohio State law school, Oxley spent three years in the FBI. He received a commendation for his role in the arrest of two Black Panthers accused of bank robbery. While he was an agent he met and married Patricia Pluguez, then a flight attendant. She survives him, as does their son, Chadd, who’s also a lobbyist.

In 1972, at age 28, he won a seat in the state House. His opening to run for Congress came in April 1981, when Republican Rep. Tennyson Guyer died. Oxley ended up winning the seat by 341 votes. He announced his retirement soon after winning his 12 th term, the only other time he ever finished with less than three-fifths of the vote. He spun through the revolving door as soon as possible after the election his successor, fellow Republican Jim Jordan, becoming a senior official with NASDAQ and a top rainmaker for the lobbying and law firm Baker Hostetler .

Save for later
Topics: obituaries icnw